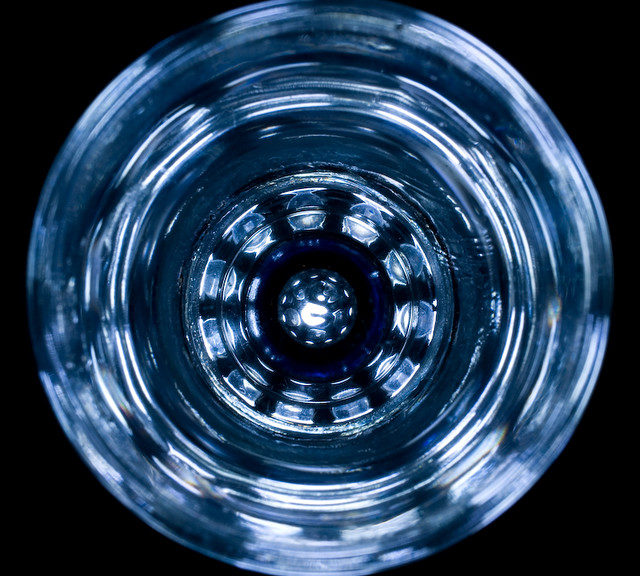 We know the cliché – the glass with the water and the accompanying question delivered by some snot of a snippet:  Is the glass half-full or is it half-empty?

We think we know what the guys in the white coats say about choosing one thing over the other means too.

If you don’t care, it is implied, then probably you’re a loser.

My own favorite take on the thing is a joke:

While the optimist and the pessimist were arguing about the glass, the opportunist grabbed it and drank the water.

The Light of My Life remembers one time he found a tiny bright blue bird egg that he had never seen before (or since).  When he showed his find to his grandson Charlie, the little boy immediately grabbed the thing and popped it in his mouth.  He thought it was a candy Easter Egg.

To Charlie’s dismay, the thing turned out to be a rotten old bird egg.  YUCK!  They never did find out what kind of bird laid the egg.  (Hawaii doesn’t have robins.)

It seems that opportunists don’t fare too well either sometimes.

PESSIMISM AND OPTIMISM ARE NOT WORLD-VIEWS

I don’t know how many kazillion words have been written about the joys of being an optimist as opposed to the downer of being a pessimist.

Optimism is touted as the cure for the blues and life-induced funk and a panacea for a hap-hap-happy life.  Pessimism gets a lot less good press.  We get the impression that we can actually choose one over the other and use it exclusively to hammer out our own best way of being.  If only we could repress our pessimistic tendencies and enhance the optimistic ones, then we could all be happy campers, it’s said.

Alternatively, if we could tone down our namby-pamby, airy-fairy optimistic tendencies then we could kill it as bad-ass warrior types and win the world.

The thing of it is, every human alive is a mixture of optimism and pessimism.  We really are not either-or.  We are both.

Optimism or pessimism is an attitude and a leaning towards one way or another of thinking or feeling.  At most, optimism and pessimism are persistent human character traits that may be at least partly determined by the DNA we inherited from our long-ago caveman ancestors.  Both engender survival strategies that work, but they are somewhat less than a real, complete world-view.

Our ancestors who excelled in either of them were likely to survive Life’s vicissitudes, prosper, and procreate.  Optimism and pessimism both helped the long-ago barbarians who lived long enough to become our ancestors.

In order to survive the fangs and claws of the monsters in the environs as well as the pitfalls and harshness of ordinary savage living, you really needed to tap the wariness and alertness pessimism engenders.

The best warriors and strategists are powerful pessimists.  It’s how they figure out what and who to fight against.  It’s how they determine the best tactics to use when trying to re-order the world.

In order to get all the babes and the boy-toys and to earn the goodwill of your neighbors as well as have the wherewithal to go exploring into the unknown, optimism is surely a good thing to have in your mana (personal power) toolbox too.

SO SAYETH THE GOOD DOCTOR

The late Paul Pearsall was an internationally recognized neuropsychologist, a popular speaker and the author of more than 15 books.

In 2005, while he was an adjunct clinical professor at the University of Hawaii at Manoa and a member of the board of the Hawaii State Consortium for Integrative Health Care, he wrote THE LAST SELF-HELP BOOK YOU’LL EVER NEED:  Repress Your Anger, Think Negatively, Be a Good Blamer and Throttle Your Inner Child.

In it, he takes on the pop-psychology industry and points out the fallacies inherent in their “scientism” – taking the research results of real scientists and molding and massaging the for-real findings to suit whatever latest flavor of living these “experts” are touting as well as throwing in a whole bunch of “everybody-knows” in there.

Pearsall advises taking it all in with at least a grain of salt.

In the book, Pearsall urges his readers to continue to explore the always-fascinating questions about why we humans do what we do.  (He isn’t opposed to us finding out what makes us tick).

But, he also advises that we step back from the blather and think for our own selves and try to determine what is real and true and right for us.

About optimism and pessimism, Pearsall recommends learning to use both styles of thinking to navigate through the world.

In other words, the guy is telling us to take a look at the whole glass and use the durned thing to quench our thirst.  Fill it up, drink it down…whatever.

He also recommends that you stop beating yourself up because you are not really bent the way the current guru of righteous living says you should be.

The whole reason he wrote the book, Pearsall says, is because so much of the stress of modern living that he had seen seems to arise from a person fighting against his or her own nature and trying to be something they are not.

He starts the introduction to the book with a quote from Ben Wyld, “Life used to be so simple before we all started reading about how to live it.”

Pearsall goes through many of the knee-jerk truisms that self-help “experts” propose about Life and Living Right and deconstructs them one by one.  His advice, always, is to work on figuring out what you think your own self.

TWO FUNDAMENTAL WORLD VIEWS, ACCORDING TO A MYSTIC

He says there are only two.  Either one emphasizes the connectedness of all life, or one accepts disconnectedness and isolation as our human fate.

According to Nepo, before the 20th century, all us humans pretty much agreed that everything is related to everything else, that all the parts are connected to each other as well as to the whole and that life is “empowered by actualizing this relatedness.”

Most of the old wise guys offered basic variations on that same theme, that we humans are a part of something way, way bigger than our own little selves.

But, then, Nepo says, out of the rubble of a world torn apart by the devastation of two world wars, an alternative world-view rose up in the West that became the foundation of our post-modern sense of disconnectedness and isolation.

This way of thinking was dubbed “existentialism.”

According to its proponents, nothing is connected to anything.  We are all isolated bits bumping around in the meaninglessness of it all and the fact of our existence is all there is.  In other words, we humans live a hard-scrabble life and then we die.

The only meaning that can be found or generated, according to this world-view, is in the moment we are about to enter and in what we want and what we care about and what we do and how we can use the all of everything to make things go our own way.

He says, “…the postwar world dressed itself in unbridled technology and existentialism took a powerful hold on the profit-driven imagination of Westerners.”

And he goes on with that grim scenario.

Nepo does confess that his bias as a mystic and a poet is towards believing in “the sea of everything over the sea of nothing” – in connectedness over isolation.  Nepo defines a mystic as “anyone who believes that there is something larger than themselves.”

I, too, am going to plunk my one vote down for connection.

(Otherwise, I find, the world turns into such a cold and lonely place and you get to feeling there’s no point to any of it.)

What do you think?

HAWAIIAN-STYLE CATEGORIES OF THOUGHT (ACCORDING TO ME)

I am really proud of myself.

I am pretty sure that I finally figured out an ancient Hawaiian way of categorizing the thoughts we humans think.  (The thing has puzzled me all of my life and I finally got it to make sense.)

Hawaiians believe our thoughts arise from three different sources – our po’o (head), our pu’uwai (heart), and our na’au (gut).

Maybe I’m wrong, but the way I figure it is this:

It’s about stopping by the store on the way home from work to grab some milk and about figuring out how to launch a new product and stuff like that.

It’s about things like showing respect and taking care of nurturing other people and the world and ourselves and all that stuff…the touchy-feely jazz.

It’s doing the body- and mind-moves that allow us to get away and stay away from danger as best as we can.  It’s about avoiding using the face-block as a default defense move.

I say we need to use all of the different ways of thinking humans have developed to navigate through the world.

Each one has its place and its time, and we need to learn how to work effectively with all of them so we can get to wherever we want to go and arrive there more or less intact.

In a Prozac state-of-mind

It just does not

The sweetness and light

Corn-pone flowers and all,

Ignoring all the for-real shadows

It sure doesn’t do

A whole heck of a lot of good

For the truckloads of dead babies

Of our neighborhood, does it?

Don’t know what anybody

Can do for our cousins

Living in the suburbs of hell.

Don’t know how to turn

Don’t know how to mend

Even one broken heart.

There’s a lot I don’t know.

You fire up just one skinny candle.

THAT I can do.

Header Photo credit:  “In the windmills of your mind,” by Stavros Markopoulous via Flickr [CC BY-NC-ND 2.0]

Thanks for your visit.  I’d appreciate it if you would drop a note or comment below and let me know your thoughts.