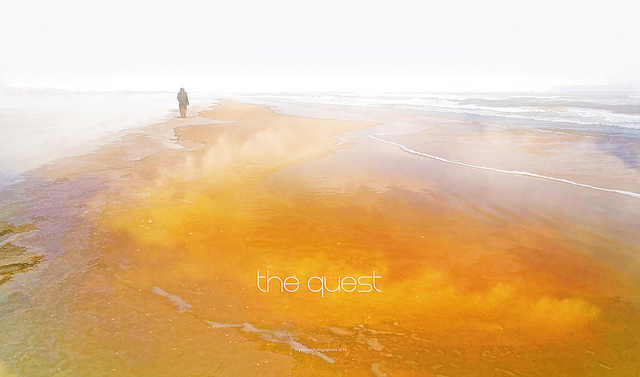 Oh, here’s a biggie.  I’ve been re-reading Po Bronson’s WHAT SHOULD I DO WITH MY LIFE?:  The True Story of People Who Answered the Ultimate Question.  Every time I do I find something.  Bronson makes a case for the fact that “What should I do with my life?” is the modern, secular version of the great timeless questions about our identity, such as “Who am I?” and “Where do I belong?”

He says the “bottom-line reality” is that we can search for identity only so long without making ends meet.  Being a “seeker” does seem to imply that you never FIND anything…otherwise, why would you keep on seeking?  However, that isn’t the whole story.

Asking yourself “What should I do with my life?” is a step forward towards ending the conflict between who you are and what you do.  Answering the question is a way to protect yourself from being ground up (or down) into someone you just are not.

It is not a question for the faint-hearted.  It is not a question only for the young.  It is one that has to be asked again and again as life progresses.  It is an integral part, as Patrice Ouelet (the photographer whose image I am using in the header for this thing) , of that most human of quests, “…the quest for certainty to be confirmed, or to the opposite, the quest motivated by doubt.”  Ouelet says about this quest, “There is no more powerful force in humans….”

PEOPLE WHO ASKED AND ANSWERED THE QUESTION….

For over two years, Po Bronson interviewed more than 900 people and turned those interviews into his book, WHAT SHOULD I DO WITH MY LIFE.  Since it was published in 2002, it has been a source of inspiration for many people.

One of those people who were inspired by the book was professional photographer James Light.  He began making short films on YouTube after reading Bronson’s book.  (You can get his full story by CLICKING HERE.)

As “Gorilla Filmmaker Now,” Light made a series of YouTube films inspired by Po Bronson’s question.  One episode was this one about author, presenter and columnist Natalie Fee.

Light gathered many of these stories of personal empowerment over time, between his YouTube offerings which have been seen by thousands of viewers, and his own professional work that focused on the efforts of groups working for change.

His endeavor has entered a new phase now.  His latest work is a film called, “What’s Your Story?”  To make it, he’s on a quest to collect the stories of people who have asked what he calls “the ultimate question.”  He encourages people to start a conversation with him about their answers to the question and where it has taken them.

Light intends to share the stories he is gathering with the world, in the hope that using the power of story will allow us collectively to gain wisdom and perhaps to change the world.  It is, I am thinking, a very good goal.

There’s a second good Bronson question which didn’t get as much air-time as the titular one.  He tells us, “The right question is not, ‘What’s the Crap Factor?’  The right question is, ‘How can I find something that moves my heart, so that the inevitable crap storm is bearable?'”

This, too, is a good question to ponder….

Here’s a poem that’s on the way to an answer.

Aw, okay, I admit it…this one’s just a bit of whining on the way.  (I figure the whining’s just as real and as human as the triumphal march….)

CAN I GET A REFUND?

There are no shortcuts to wisdom,

That will materialize me

Into self-awareness and self-knowledge.

The one where you wish yourself to bliss,

And dance around all joyous in the buff

And turn your face like a flower to the sun,

Ignoring all the pain and suffering in the world,

(Never mind if your heart turns into a raisin!)

I’m here to tell ya:

But they don’t actually change anything.

It doesn’t work that way,

And I do so resent it.

I was being GOOD at things, ya know…

I was being most excellent at momentum,

And stay one step ahead of that

I can build those fairy castles all over the sky –

A whole subdivision, you bet.

Except that then I’m just this impossibly small package

All tied up tightly into myself –

Not even hiding a secret, wondrous core…

Just the me I agreed to be.

And let it all hang out.

I’ve got just one problem with that one.

Make me grind my teeth in consternation.

Why don’t I do it right?

What am I doing wrong?

I detest the detours that wander

All over the landscape through

And over mountains and lava fields

That, if you fall down them, mean

You land broken in the dark.

I really think I want a refund.

There’s only one ticket to ride the rocket

To the me I’m supposed to be,

And the durned thing costs everything.

30 thoughts on “A QUESTION OR TWO”