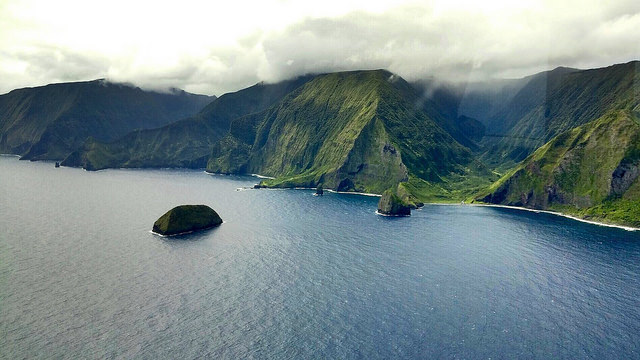 It occurs to me that it is probably not possible to convince humans to take a long-term view using argument or persuasion or logical thinking.

It seems to me that people focus on long-term because they want to or because they’re tired of hitting themselves upside the head all the time and really tired of having to climb out of potholes that turn out to be really deep and gnarly lava tubes.

LOOKING AT THE BIG PICTURE

You are not going to be able to talk yourself out of going for the short-term advantage if you haven’t developed a vision of The Big Picture.  And the real is that you are the only one who can do that for yourself.

Oh, yeah, you’ll nod your head at other-people wisdoms.  You may even try to make your walk like their walk, especially when you like the way their life looks from the outside.

If the costs that admired one pays for their life is very high, you may not be willing to pay what they’ve had to pay for it.  So you quit doing your version of their vision and you tell yourself whatever it takes to get back to bed and pull the covers over your head.

WHY DO OTHER GUYS AND GALS…..

Medieval cathedral builders labored a lifetime with the fruits of their labors still a hundred years into the future.

The 70-year-old farmer plants a tree his grandkids will sit under.

Parents of young children try to lay a foundation of values and attitude that will serve an adult 20 year later.

A craftsman knows that mastery of an art form takes a lifetime of repetition and effort — whether the work sells or not.

Visions can take a long time to manifest.  They take concerted, continued effort, often at the expense of here-and-now pleasures and even of other long-term goals and aspirations.

A vision makes a big displacement in your life.  It shoves everything else out of the way.  (Visions are very rude.)

When your head is down and your ass is up and you’re working on building the road to your dream  you may not see a lot of the roadside scenery.  Visions make you blind sometimes.

You may have to break the ties that bind you to a life that does not have room for the pictures you are seeing.

You may have to explode the structures you’ve spent a lifetime building inside yourself to get  yourself ready for the realities of that dream.

You may have to initiate changes in your life that are uncomfortable or  downright painful.

It will take way more time, way more effort, and a whole lot of humping and hustle to build the road to your dream.

And even if you do all that, there is no iron-clad guarantee that the dream will come real.

You may not last long enough or develop the stamina you need to stay the course.  You may get sidetracked.

Circumstances over which you have no control can co-opt you.

Other people could betray you.  The world may change and open doors might slam shut or the detours on the road take you to places where you would rather not be.

As you get deeper into the dreamscape of your own making you may find that the vision turns hazy or morphs into some ugly nightmare that makes you run the other way.

Visions must be large to be worthy of such commitment.  I suppose that is why it often takes a lot of time and thinking to develop a vision with meaning and mana.

And if they are large, then they’re going to take everything you’ve got to give to it and demand even more from you.

BIGGER THAN JUST YOU

In his book, LIFE ON PURPOSE:  How Living For What Matters Changes Everything, Victor J. Strecher tells a story about Abraham Maslow, the founder of humanistic psychology.

Maslow was the guy who developed the concept of the “hierarchy of human needs.”

He proposed the theory that “self-actualization” was the ultimate stage in human development and numerous studies grew out of it that showed that this high point is, indeed, reachable only after more basic physical or safety needs were met.

This 2019 You-Tube video,  “Why Maslow’s Heirarchy Needs Matter,” was uploaded by the School of Life.  It helps to explain the nuances in Maslow’s pyramid of needs.

Maslow’s book, TOWARD A PSYCHOLOGY OF BEING, became a classic.

According to Maslow’s motivation theory there are five interdependent levels of basic human needs that have to be satisfied in a strict sequence.  It says you can’t think of the next level until the needs at the lower levels have been met.

If you’re starving, it’s unlikely that you’ll be using your creativity for more than getting the next scrap of food that will keep you going.

If you’re running from bombs and bad guys intent on killing you, there isn’t much time for developing your self-expression.

If you’re lonely in a world of hard, there probably won’t be a lot of room for joy and laughter and self-esteem.

Without self-esteem, there isn’t a heck of a lot of self-actualization possible. It’s unlikely that you’ll be able to think about what you want to achieve if you’re mired and tangled up in all the unworthiness of you.

THE GLORY OF ME

Maslow’s idea caught on.  The “me-generation” was born.

Self-fulfillment was the key to human happy, the theory said, and we took to it like dolphins in the surf.

Sometimes, though, it got to be like crabs-in-a-bucket when other people had other agendas that did not include the happy of you.

And then, in 1969, in the latter part of his career, Maslow had an epiphany. He said, “The fully developed (and very fortunate) human being working under the best conditions tend to be motivated by values which transcend his self.  They are not selfish any more in the old sense of that term.”

Strecher marvels that Maslow, at the absolute top of his field, would change his hugely popular model and say, essentially, “I was wrong.”  (Perhaps it was because Maslow apparently cared more about his own vision of understanding what motivates humans than he did about the tangible achievements of his own self-actualization.)

Maslow began to study “transcenders,” visionaries who spent their time working on ideas and visions that were larger than themselves.

He discovered that these individuals made great innovators and reached higher levels of creativity.  They exhibited, he said, “humility, a sense of smallness, awe before the tremendousness of the universe.”

Maslow died before he could explore this idea further.

After his death, a wide-ranging book, THE FARTHEST REACHES OF HUMAN NATURE, that contained Maslow’s scientific and philosophical essays on biology, synergy, creativity, and cognition as well  as his thoughts on self-actualization and the hierarchy of needs theory was published.

The book makes me wish he could have stayed with us longer.

“Vision” is really the what, the picture of the future you want to create.  Visions that are worthy require purpose — the why.

Purpose answers the question, “Why do we exist?”  It’s basically about looking for a way to contribute something of value to the world in some unique way.

The how of it all determines the way you walk when you’re following a vision.  All the steps you take should automatically fall into line if you can develop your vision.

If you’re reading this, then it’s likely that you’ve probably got  your physiological needs, your social needs and your self-esteem needs (more or less) covered and you’re working on the self-actualization part.

Maybe now is a good time to think on bigger things than your own teeny self.  It’s exciting that it’s possible, isn’t it?

And they tell me it’s not real,

Untested by time or happenstance,

Untouched by human hands and mouths,

Unbattered still by Is and unheralded by Was.

And they are right.

This fantasy that’s come to me

The one that glitters teasingly

Has brightened Is and tempered Was

And still it flies….

I cannot say where it will lead,

This dream of mine I’m building.

I cannot say what time will bring

Or if it will come real.

I see this unreality burns bright and inexorably

It flames away the dross of what has been.

I think I’ll choose to keep my dream.

I think it looks real good on me.

24 thoughts on “THE BIG PICTURE”