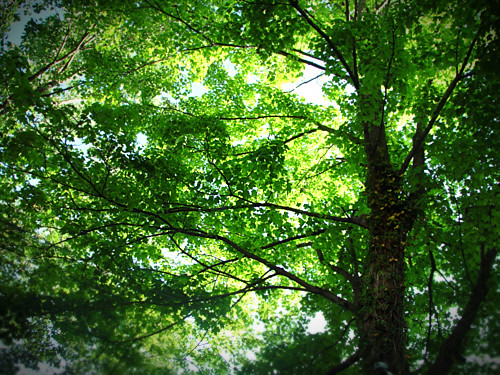 I’ve been circling around this latest concept I’ve stumbled across like I imagine an awestruck fan would do to take in Michelangelo’s Pietà at the Vatican.  My head keeps going, “Wow…wow…wow.”  My heart is drowning in the swelling sound of some Gregorian chant or something.  OOOH!

The idea that each human being’s ability to make choices can absolutely affect and shape both the forms their own lives take as well as the world in which they live is a mind-boggle of the highest order to me.

The only problem is that, at the same time, I am also getting the same feeling I used to get when I opened my uncle’s fishing tackle box and found yet another tangle of fishing line from the last time somebody or other used the thing.  ACK!

The one thing I learned from these forays into the tackle box was that the fishing sure got easier if you took the time to untangle that messy clump of fishing line.  (It works even better if you put things away properly so you don’t have to face the mess you left behind the next time the fish are running, but that is another story.)

It does amaze me that we humans take this singular super-power of ours so much for granted.  It is even more astonishing that most of the Shapers in the world (who are actually all of us) often march around routinely denying that we even have this power in us.

WHAT IS UP WITH THAT?

Every one of our actions can do a number on this world of ours – even something as innocuous as planting flowers.

Yet, for the most part, as we were growing up, the Bigs around us tended to spend a lot of their time reining in all the baby world-makers and world-breakers.

We Littles were endlessly given some version of the Spider Man mantra: “With great power comes great responsibility, you boob!”

We probably heard some version of that every time we messed up by doing something that either went against the Laws of Nature or missed the mark of the Sweet Spot of Same-Old towards which we were, all of us, supposed to aim.

Somehow, the majority of us did not get the part about what the great super-power we were supposed to be holding was.

I noticed a while back that tucked into each of the Hawaiian teaching stories is the unspoken assumption that we humans are all cousins somehow and that we are all descended from gods.

I do so like that one better than the other one about being some power-being’s pet, pawn, or minion.

Of course, it could be that’s just me being delusional.  Whatever.  (I like my delusion way better than that other thing, guys!)

AND WHAT IF IT’S REALLY TRUE?

Let us also suppose that this ability to shape stuff arises from the perfectly learnable skills that surround the making of decisions and choices that align with and are congruent to our own natures.

If we look around at all of the astounding things we human beings have accomplished and made (as well as the great disasters we have often precipitated), it seems like it could be a really plausible possibility that we humans do shape the world.

How else can you explain that our species — one that lacks major physical prowess (compared to, say, lions and tigers, bears and sharks) — is actually at the top of the food chain here?  All those gnarly predators are our prey.  Wo!

WHAT SOME OLD WISE GUYS SAID

On the slopes of Mount Parnassas in Greece, the remnants and ruins of an ancient temple to Apollo, the Greek god of music, harmony, light, healing, and oracles still stand.

It is said that the temple probably started out as a hut made of laurel branches located over a volcanic vent that probably was the source of some sort of hallucinogenic gas or something that triggered visions in the person breathing in the fumes.  (That’s one theory, at least.)

Over the centuries, there were at least five recorded iterations of the structures on the temple site.  Eventually the temple housed the ancient Mediterranean world’s most-consulted oracle.  These buildings kept getting destroyed by assorted conquering armies and by natural disasters over the centuries.

The last one, the Pausanias “modern temple” was made of limestone and was built in 330 BCE.  That one survived until AD 390 and was destroyed (along with a lot of “pagan” statuary and artwork and other wonders) by the Roman emperor Theodosius I in the name of Christianity.

The temple was probably targeted because it was world-famous as the home of a seer, the Pythia (an old woman in a long line of old women) who, it was said, channeled the wisdom of the god Apollo.

Delphi got to be a powerful city-state in the ancient world because of the fame of their oracle, who had a really long waiting list as well as a team of devotees to take care of the place and priests who charged her customers a heck of a lot for her services.

Like modern-day oracles (economists, political analysts, and other such forecasters) the Pythia’s answers to the questions of the day were often obscure riddles that left everybody scratching their heads.  (That one reaction hasn’t changed much with our own modern oracles either.  They, too, also charge a heck of a lot for their prognostications.)

Inscribed on the columns that stood on a porch outside the temple’s inner chambers were as many as 147 wise sayings or proverbs that were variously attributed to assorted popular traditional sages.

The three main ones are usually listed as follows:

Notice that the one that’s come down to us as the most important in all this collected wisdom of the ancients is “Know thyself.”  If you don’t know yourself, none of the other aphorisms works as well, it seems.

And maybe that’s another clue.  You have to put in the work of getting to really know yourself in order to figure out what you’re going to do with all of that potential power you’re carrying around.

This engaging 2017 YouTube video was created by UPROXX Studio and features surfboard shaper Tyler Warren who is very much aware of and honors his own super-power of shaping.

A NOTE FROM STUPID

A paradox and puzzlement

(A stance encouraged by a world

And morph persons Into

Is alive and well.

“I cannot do this.

“Sure, SOMEBODY has to do it,

Lemme get this one straight.

I take the blows that come

When I inevitably misstep or

Some other dumbness happens.

I carry my own load.

But, hey, I’m still carrying it)

And I make my way.

The gait gets gimpy sometimes,

And there are harrowing moments,

But I go along.

You stand there telling me now

That I have to carry you too?

When did I get elected the hero of your story?

Did I miss the nomination?

Can I decline the honor?

See, I’m the hero of my own story.

I decided that a while back,

Got to be kinda stupid-looking.

(I do so hate looking stupid.)

So, lemme ask you something:

Did I forget to take the “STUPID” label

Off my forehead or what?

4 thoughts on “SHAPING STARTS WITH YOU”