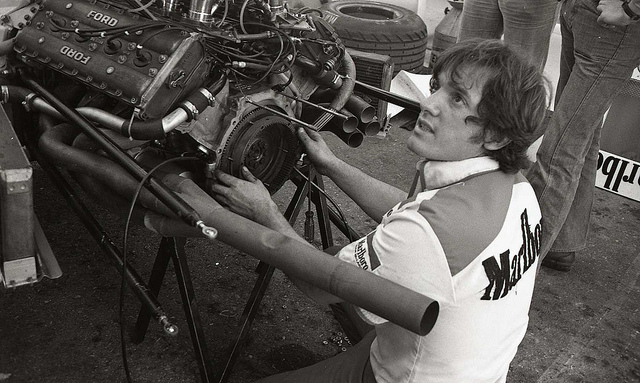 I don’t remember where he originated.  He was a character in one of the potato-chip (you can’t just eat one) books that I like to read.

In the book, Frank-the-Mechanic was a retired assassin who gets sucked back up in leftovers from his previous life.  He was a super-casual sort of businessman who had a number of interests that he kept up, all of them suitable as a single career.  He did each one – a little bit every day to move each project forward.  And he was most excellent at everything he did.

It was a good story, but it was Frank I fell in love with.  I keep him in my head as a role model.  “What would Frank-the-Mechanic do?”  It helps me stay on top of the myriad details of my life and, when I get it right, the day ends well for me.

I do a little of each thing I do as well as I can every day.  Some days I can do it well; some days, not so much.  But the weight of all those itty-bitty little things done on all of those days does add up to a whole pile of something, a lot of which I like.

On my good days it feels like I am working with the Creative to help my Millenium Falcon fly….and that is a good thing.

And then there are the days when the one thing I’m doing eats the whole day and a lot of the night as well.  One time I told myself I was just going to work on a little blog post – a small story that was part of an epic tale of traveling between Nepal and China to Lhasa when the border was just being opened.  (It was one of the Light of My Life’s stories.)

I had other things to do, after all.  The palm leaves that passing tropical storms dropped needed to be hauled off to the compost heap.  The bamboo and the false ‘awa, two rapacious patches of wild and free plants, were encroaching again.  I needed to get a bunch of little nit-noy stuff set up for my property management gig.  ARGH!

I got so caught up in the tale I just kept going and going and going.  I ended up with four long blog posts with pictures and so on and so forth.  I also blew off work in the yard and work on a number of other projects, none of which was particularly pressing.

So it goes sometimes.

I got on the other stuff the following day and in the next days after and it all eventually got done.

One of my favorite, pertinent quotes about all this is from English comedian Russell Brand:  “One day at a time.  It sounds so simple.  It actually is simple but it isn’t easy.  It requires incredible support and fastidious structuring.“

THE ONE ABOUT TRYING

Universe always gives you what you want

It usually comes one day after you can’t stand the waiting any more.

What are you grumbling for?  Ambiguity is good for you and balancing on cliff edges is

Exhilarating…if you can stand the height.

Listen to the grass blade underneath that rock

And watch the baby wobbling on unstable legs,

Pay attention to water weaving through a stream bed,

Seeking ways over, around, under, past, and through…and through.

Think about the wind gently, gently pushing against stone,

And think about mountains twisted into eerie spires and fantastic gyres.

Old truths repeated one too many times become clichés,