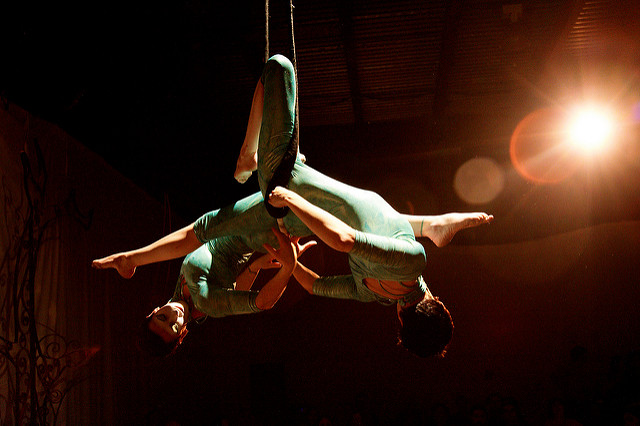 One of the best bits of advice I’ve come across is in Sam Bennett’s book GET IT DONE: From Procrastination to Creative Genius in 15 Minutes a Day:  “Be busy like a trapeze artist flying through the air or like a stuntwoman – just cleanly move through each task with great clarity, concentration, and grace.”

WHY MULTI-TASKING IS NOT A GOOD IDEA

I’m thinking that the development of clarity, concentration and grace is probably the best argument there is for not multi-tasking.  Think about it.  When you’re trying to do three things at once, you are never very focused or concentrated on just one thing because the other two tasks you’re trying to do in tandem keep niggling at you and jostling your elbow.

These other tasks distract you and that can make you clumsy.  You don’t do any of the tasks you’ve set for yourself very well and it’s likely that you’ll screw them all up.  And if you’re flying high, it is probable that you’ll also take a tumble.

The antidote to multi-tasking is uni-tasking:  doing one thing at a time with focus, care, and attention.

Since I’ve got lots of things to do, serial uni-tasking is going to be my next big thing!  Do many things, one thing at a time….one-step, one-step, one-step.  I’ll still be busy, but I probably won’t fall off the trapeze in a distracted moment.

I’ve been tripping on watching guys play at parkour, which is also called “free-running.” This extreme sport, which apparently began in France, involves running at top speed through an urban or natural obstacle course using whatever happens to be there to get further.

The practitioners have to just DEAL with whatever gets in their way and just keep on going.   In a split-second they have to accept what lies in front of them and fling themselves at it in order to overcome whatever challenge it presents.

It’s an astounding display of physical prowess, fast thinking, and fearlessness.  You cannot do anything ELSE except stay on course and keep on going because if you’re distracted in the middle of leaping from one rooftop to another, you are likely to end up as street pizza on the sidewalk below.

Here’s a You-Tube video of the world’s best parkour and free-running.  It was posted by StuntsAmazing….

To remind myself of my latest resolve, I have a new motto:  PARKOUR!

ANOTHER STRATEGY, ANOTHER POEM

And here’s a poem about yet another strategy – accepting what is and saying “yes.”  This poem is written in pidgin.  However, only a few of the words are likely to be unfamiliar, I am thinking.  Mostly it’s the grammatical liberties taken by the speaker that makes the poem pidgin.

The word “went” set before any verb turns that verb into past tense, so “you went show me” translates to “you showed me.”  Often the “is” and the “are” get dropped in the sentence structures.   (“You no fool” is really “you are no fool” in proper English.)   “For” is oftentimes substituted for “to” in a sentence.

All of this ungrammatical playing around gives pidgin its own special rhythm, which is very useful for certain poems.

“Da kine” is a Hawaiian-style local pidgin phrase that’s really hard to describe.  It basically refers to the all of everything in a particular context that requires no further explication, mostly because the other person already knows what the speaker is referring to.

Sometimes the use of “da kine” can verge on telepathy.  It requires that the two people who are talking are in tune with each other to a high degree.

You know you right on, my braddah.

You went show me how for live.

“For drown out Babylon,” you went tell me,

You no fool around, my braddah,

You went teach me for go good.

Through your anger, grief, and pain

My braddah, you went show

Da kine can be all good,