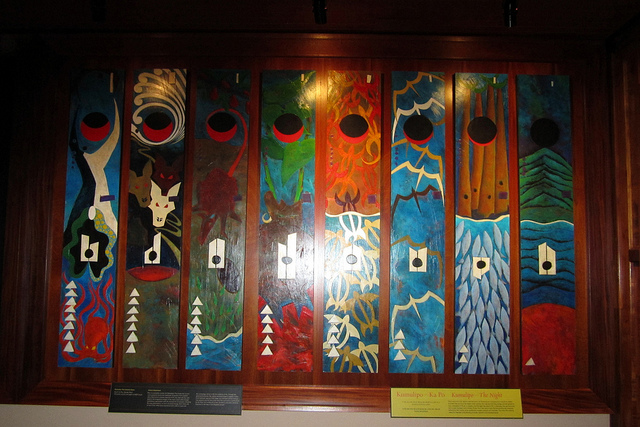 The Kumulipo is a Hawaiian creation chant.  It is probably one of the few recorded accounts about the earliest Hawaiian understandings regarding the origins and life-development in this world.

It is also a finely wrought ancient chant that links one family of ali’i, chiefs, to the Creative and to the pantheon of gods shared by other Polynesians.  It is about how our world was formed and the inter-connectedness of that world.

The ancient Hawaiian kahuna, priests, would chant the Kumulipo during the annual Makahiki season which honored the god Lono. In 1779, Captain James Cook arrived in Kealakekua Bay on the Big Island (Hawai’i) during the Makahiki and was greeted by the Hawaiians chanting the creation chant.

Some stories say Cook was mistaken for Lono, because of the type of sails on his ship, which the natives called a “moving island.” It is said that the Captain’s pale skin echoed the legends of Lono, who was also supposed to have light-colored skin and who had promised that one day he would return from his travels.

Cook’s emergency return to the islands shortly after the Makahiki ended dispelled that illusion and had devastating consequences for him and his crew.

In 1889, King David Kalakaua, as part of his effort to preserve the most important of his people’s wisdoms, printed a sixty-page pamphlet with the words of the chant.

Attached to the pamphlet was a 2-page paper on how the Kumulipo was originally composed and recited.  The work was taken from a manuscript copy that the King had.  That manuscript is now in the Bishop Museum on Oahu.

Several later translations of the chant were made by various people including one by the King’s cousin, Queen Liliʻuokalani (Lydia Kamaka’eha Paki).  Her translation of the chant was published in 1897.  It was written while the queen was under house arrest at Iolani Palace after the overthrow of the Hawaiian government by a group of American businessmen.

The beloved Lili’u was the last queen of Hawai’i.   (Her translation was re-published by Pueo Press in 1978.)

However, none of the translations of the chant were available in English until American folklorist and ethnographer Martha Warren Beckwith also published a translation of the chant in 1951.  Beckwith’s Kumulipo has been a resource for students of Hawaiian culture ever since.

The point of all this is that through the years the chant and the native mindset from which it emerged was preserved for future generations.  The words of our ancestors are remembered.

In 2009, Brave New Voices champion slam poet  Jamaica Osorio performed her spoken word poem “Kumulipo” at a White House Evening of Poetry, Music, and the Spoken Word.  The piece was a many-layered lament in the style of the ancient Hawaiian master poets.

The featured picture in the header of this blog is a part of a 16-panel work by contemporary Hawaiian artist Carl F. K. Pao.  It is an interpretation of the Kumulipo chant and was featured in an exhibit at the Hawaiian Hall in the Bishop Museum on Oahu.

I have often wondered

Why the others among us

That they are a part of

All the everything there is.

Today it hit me:

They think they were made

By some bachelor god

In the sky up high

Who took the mud from the earth

And mixed it all up and gave it breath.

So, all these other ones,

They think they are mud and spit and ashes

Wakea and Papa and Hoku:

They are OUR parents.

Grandfather Wakea made the Universe

From the sacred gourd, we know.

From them was born this ‘aina,

The islands we call home.

From them was born Haloa the elder,

From them was born Haloa the younger,

We are not MADE things.

We are blood and bone of the gods,

And we are their pride.

Maybe that’s why these other ones do not understand.

[My friend, artist Phil Sabado, was going through his Hawaiian myths and legends period and we had a lot of fun exploring the mindsets encapsulated in these old stories together.  It helped my understandings of Hawaiian thought tremendously and sent me off in odd directions.  Wakea, Papa and Hoku are Hawaiian progenitor-gods.  The two Haloa brothers help explain the relationship between Hawaiians and the taro (kalo) plant, which produces our most important staple food.]

Picture credit:  Kumulipo:  The Creation Story in the Hawaiian Hall of the Bishop Museum by Wally Gobetz via Flickr [CC BY-NC-ND 2.0]

10 thoughts on “THE KUMULIPO AT THE WHITE HOUSE”