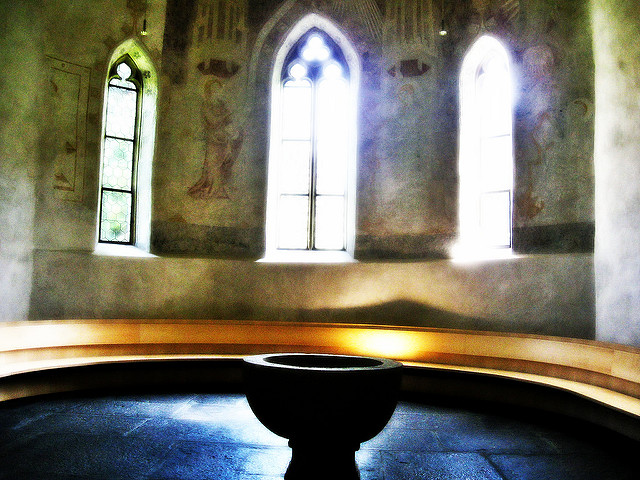 “Meaningful Work” is the new Grail, it seems.  Every time you turn around there’s somebody or other admonishing and exhorting you to get out there and “find” the work that gives meaning to your life.

It’s the key to happiness, joy and self-fulfillment, they say.

Adam “Smiley” Poswolsky, in his book THE QUARTER-LIFE BREAKTHROUGH, has a clear and succinct description of the shape this “work with meaning” is supposed to take.  He says this sort of work has these four qualities:

This is the kind of work that has all the bennies and the good stuff that you like, so I suppose it does makes sense that if you actually had a job like that it’s likely you would be blissed.

Lifestyle and career coaches and fire-starters all seem to agree:  If nobody will hand over that Meaningful Work treasure to you, then, by golly, you can just get out there and make your own bread for your own self!  (Go, you!)

“MEANINGFUL” CAN BE HARD TO FIND…OR IS IT?

In the real world, it seems to me, a majority of the people who must work for a living often have a limited number of options.

For one thing, they do have to accept whatever available jobs there are that they are qualified to get.  (They hope these jobs will pay enough to support them and their families.)

If not, they may choose to take on a couple more similar gigs or invent side-gigs that take up the slack.

Often they may work really hard on acquiring or expanding skill-sets that will make them more attractive to assorted employers.

Some of them may even make the effort to develop skills that will allow them to build a framework for work that is uniquely their own.

The Bureau of Labor Statistics, in a press release issued in March, 2015, tells us that the four most common occupations in America at the time were retail salesperson, cashier, food preparer and server, and office clerk.

The thing is, these jobs are still a necessary part of keeping the world around us functioning smoothly and well.

If you take away all the salespeople and cashiers, all the food service people and all of the assorted office minions and functionaries, would we be able to live life as we know it?

WHERE DID ALL THE MEANING GO?

In this YouTube video featuring a TEDx talk given at Azusa Pacific University, Ryan T. Hartwig explores how Meaning went Missing-In-Action from the still-useful post-modern jobs we do.

Hartwig’s point in the video is this:  “There is no meaningful job unless someone brings meaning to it.”

It’s not a new idea.  For what was perhaps his best-known book, WORKING, which was published in 1997, American journalist and radio broadcaster Louis “Studs” Terkel talked to over 100 people – from gravediggers to movie studio heads — about their jobs and how they felt about them.

He came away with the thought that “Work is about a search for daily meaning as well as daily bread.”

A couple of stories from the book THE POWER OF MEANING:  Crafting a Life That Matters by Emily Esfahani Smith, illustrate this point quite handily.

In the first story, John F. Kennedy ran into a janitor at NASA in 1962.  When the president asked the cleaner what he was doing, the janitor said he was “helping put a man on the moon.”

The second story is about a road-worker directing the flow of traffic near a repair site on a stretch of Colorado highway.  The guy stood in the hot sun and periodically he would turn  a sign that read “Stop” on one side and “Slow” on the other.  He kept doing that diligently, over and over again.

A driver in the line of cars waiting for their turn to get past the repair site asked the road-worker how he could stand such boring work.

The road-worker replied, “I keep people safe.  I care about these guys behind me and I keep them safe.  I also keep you safe, and everyone else in all those cars behind you.”

As Smith points out, “The ability to find purpose in the day-to-day tasks of living and working goes a long way to building meaning.”

Wharton School of Business professor Adam Grant did a survey of two million individuals across over 50 jobs.

Those who reported finding the most meaning in their careers included clergy, English teachers, surgeons, directors of activities at religious organizations, elementary and secondary school administrators, radiation therapists, chiropractors and psychologists.

These people all felt that the world was a better place and other people were better off because they were there doing their work.  Grant found it telling that every one of these satisfied workers provided needed services to other people.

We’ve been told that we have moved out of a “manufacturing economy” into a “knowledge economy.”  However, as Grant points out in a 2015 Huffington Post article, “Three Lies about Meaningful Work,” we are actually living in a “service economy.”

Not only that, but it was estimated that in 2016 almost two-thirds of the world’s GDP (Gross Domestic Product) was produced in the service industries.

In this YouTube video of a 2012 “Capture Your Flag” interview, author and public speaker Simon Sinek answers the question, “What makes your work meaningful?”

“Capture Your Flag” is executive producer Erik Michielsen’s educational media company which has been creating online video content and helping to develop material for online and educational publishers since 2009.

In the series of videos Michielsen continues to produce, he interviews what he calls “rising leaders” and “near peers” (people a step or two ahead of the viewers of the video) who have faced and resolved familiar business and career situations and problems.

FINAL THOUGHTS AND A TAKE-AWAY

If the only meaning in work is what you, the worker, brings to it, then it seems to me that it would be a good thing to think on the counterintuitive advice Professor Hartwig gives at the end of his TEDx talk:

Hartwig also encourages managers and administrators to develop a work environment that will help to foster this way of thinking by allowing and encouraging workers to make their work more meaningful and allowing them to use all of their human qualities to do it.

Here is a poem I wrote about what being a property manager means to me and the lessons it has taught me.  [Kuleana is Hawaiian for “responsibility.”]

Ya know, I’ve been thinkin’,

I get to walk through Other People’s worlds –

The people living in these worlds

Are who they are,

Are what they are,

And they have to be Real with me.

Because I am the gatekeeper –

The foo-dog holding the key that

Unlocks the theater back door.

In order to use that stage that is my kuleana,

These people must get by me,

So I become a tourist in their lives.

They show me its shape –

All the good parts, polished up and spiffy-nice.

(It’s only later that I get to see

The darknesses and broken crockery.)

This all helps me understand a fundamental thing:

These others walk wrapped in a bubble-world

Of particular hopes and dreams.

They come to me lugging a load

Of issues, the consequences of past mistakes.

It has nothing to do with me

When some dream blows up in their faces,

Or some hope dies a lingering, agonizing death.

Their moves then are predicated on

The prevailing climate in their own world-bubbles.

Sometimes I get caught in the crossfire of conflicting other-people needs.

Sometimes I’m in the wrong place at the wrong time –

Who gets the random fist in the nose.

Since I don’t see it coming,

A face-block’s the only move left to me.  Ouch!

It surely is a liberating thing to know:

People are doing what they do,

I do not have to take what they do personally.

Header picture credit:  The Grail by Carlos Garcia via Flickr [CC BY-2.0]

20 thoughts on “WORK AND MEANING”