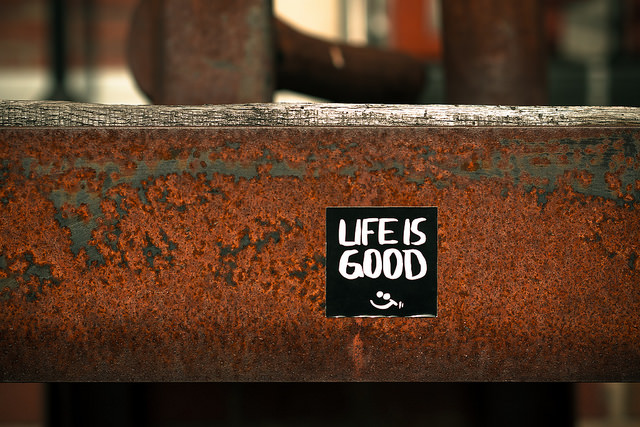 One was a hoary old classic marketing book, THE 22 IMMUTABLE LAWS OF MARKETING:  Violate Them At Your Own Risk! by marketing strategists extraordinaire Al Ries and Jack Trout which was written in 1994.

This slim book took the world by storm in its day for a good reason.  The master marketers were the first to distill down their work and life experiences into marketing “laws” that still apply to this very day.  It’s a good one for any wannabe marketer to have on their shelf.

The second book was a joyous romp of a read.  The book, LIFE IS GOOD, THE BOOK: How to Live With Purpose and Enjoy the Ride, is written by Bert and John Jacobs and is the story of how “two ordinary brothers from Boston, who didn’t want a job but weren’t afraid to work,” built a company worth more than $100 million by selling t-shirts with the help of their friends.

It’s a very good read, authentic and honest, that incorporates told-from-the heart stories and a picture album of their wonderful shirt designs and the people who made it all happen having fun.

It was also a real-life illustration of the Ries-Trout Fifth Law, The Law of Focus, which says, “The most powerful concept in marketing is owning a word in the prospect’s mind.”

You burn your way into the minds of your customers by narrowing your focus to a single word or concept, these mavens say.  And your customers will help you build your world around that concept.

The corollary to that law is this:  “The leader who owns the word owns the category.”

ONE IDEA, ONE DESIGN, ONE BRAND

The rollicking tale of the Jacobs boys’ journey is part of their brand legend .

Starting in 1989, the Jacobs brothers wandered around, crisscrossing state lines in a nondescript mini-van hustling their shirts to no avail.  By 1994, with $78 between them, the boys were ready to throw in the towel.  They had, after all, given it their best shot.

As they drove home to Boston, they were talking about the daily flood of negative news. Between them they agreed that the only thing that could counter the mindset that arises from swallowing all that negativity was a different one with which they were very familiar.

It was a mindset that they had learned from their mom, Joan – untrammeled optimism in the face of constant obstacles and obstructions.

This You-Tube video, published by RogiDream,  features two short poems by the brilliant Charles Bukowski who had a genius for hitting the heart.  They are spoken by Tom O’Bedlam and speak to the real power behind the concept of optimism.

Optimism really is not about swimming in peaches and cream, you know.  It is about fighting the good fight and staying with it no matter what.

The highway talk led the brothers to one idea that led to one shirt design that became the brand called “Life Is Good.”

LISTENING TO THE FEEDBACK

After every road trip, the brothers threw a coming-home party to celebrate making it back to home base.  Even though they were depressed and tired, they went ahead with their ritual.

At each of these parties it was their practice to tape sketches of all of their newest t-shirt design ideas on the walls of their apartment and encourage their friends to comment on the ideas by writing on the wall.

The design that got the most kudos was the result of their highway talk:  a line-drawing of a good ole guy with a baseball cap on his head and a wide grin.  The caption said, “Life Is Good.”

When they printed up 48 shirts with that one design and took them to a street fair to hawk, they were amazed.  All of the shirts (including the two they were wearing) sold in less than an hour to a wide array of people.

BUILDING OF A TRIBE

Naturally they made more of the shirts.  They kept on selling and LIFE IS GOOD became their brand name.

Festivals and celebrations are a part of corporate life.  So is helping people.

Here’s a YouTube TEDx talk at Beacon Street recorded in 2013 featuring one of the brothers, Bert Jacobs, “Do What You Like, Like What You Do.” The company’s grown a bunch since then.

SUPERPOWERS YOU CAN GROW

LIFE IS GOOD, THE BOOK lists ten “superpowers” that can be developed to enhance your own optimistic mindset:  Openness, Courage, Simplicity, Humor, Gratitude, Fun, Compassion, Creativity, Authenticity and Love.

The brothers devote a chapter to each of these attributes, ending each one with ideas and suggestions for growing your own.  And they promise:  “The Life Is Good superpowers will help you overcome obstacles, drive forward with greater purpose, and enjoy the ride of life.”

That is also a very good thing….

then born again in some new-old form –

flowing, spiraling through this life,

in this world of dust.

trying to dance on top of this turning wheel…

moved to try to direct it, even…

(not that there’s a steering wheel).

and I keep trying to play with it,

when us kids took turns

down the grassy hill behind the baseball field,

trying to keep from crashing it through

and running over her half-blind old English bulldog.

Rolling that tire back up that hill

was part of the price for playing.

Laughing was the best part.