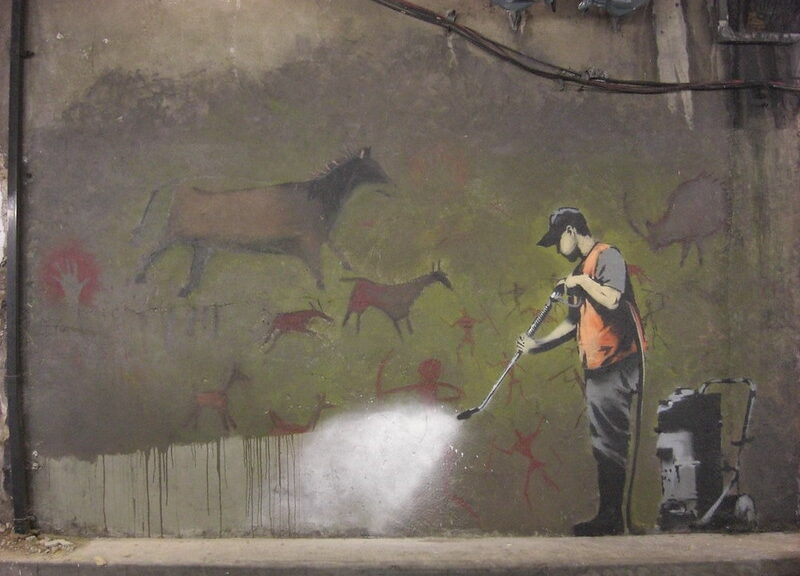 The Light of My Life likes to tell a story about how he learned one of the most important lessons an artist can learn about doing line-work well.

In the village of Masset in Haida Gwaii (the Queen Charlotte Islands in British Columbia), Mathew happened to wander into the studio of a local artist, Wayne Edenshaw, who works in the Haida Indian traditional style.

In case you’ve never seen Haida art, here’s a short YouTube teaching video, “Haida Art!!,” uploaded in 2020 by Art Around the World with Morah Brooke.  It shows some of the “form line” shapes and patterns that are typical of the style.

For a taste of the directions modern artists have taken this Northwest Coast Indian art style, here’s an image of “Hummingbird Copper Dress” a wool dress that was the result of a collaboration between Haida artist Dorothy Grant and Haida-Tlingit artist Robert Davidson.

The dress was part of an exhibit, “How Native Women Artists Guided the Creation of Hearts of Our People,” at the Renwick Gallery, a branch museum of the Smithsonian American Art Museum.

After admiring the artist’s works in progress and the finished stuff around the place, Mathew turned to the artist and said, “Wayne, those are the most beautiful lines.  How in the world can you draw lines that exquisite?”

Wayne replied, with a mischievous grin on his face, “I’ll show you the secret!”

He walked over to where Mat was standing and admiring a drawing in progress on a large drawing board.  Next to the drawing board, hanging off the side, was a string.  On the end of the string was dangling a huge eraser.

The artist laughed as he explained, “You just keep doing it until the line is right!”

HOW THE ERASER CAME TO BE

Whenever it was that people started making marks and symbols on assorted surfaces in an effort to communicate, to keep records, or to make it all pretty, it’s been a given that they also spent a bunch of time removing the marks they made and substituting other marks.

Corrections and drafts, rewriting and copying, as well as updates and revisions have been an integral part of the writing and drawing processes since the beginning.

People who worked in clay, wood, and stone had assorted ways to disappear the marks they made to make way for other marks they wanted to make instead.

English engineer Edward Naime is credited with developing the first widely marketed rubber eraser for an inventions competition in 1770.

The inventor said he inadvertently picked up a piece of gum arabic (also known as caoutchouc, its ersatz Native American name) off his work table instead of a bit of bread and discovered that the thing worked way better than bread bits for making the offensive marks disappear.

By 1778 everybody was calling the plant-based substance “rubber.”

However, raw rubber was perishable.  It got crumbly over time and icky in humid weather.  It rotted and smelled bad after a while.  In 1839 Charles Goodyear figured out how to cure rubber to make it durable.  He called the process “vulcanization.”

Then, on March 30, 1858, Hymen Lipman of Philadelphia received the first patent for attaching an eraser to the end of a pencil.

The patent was later invalidated because somebody or other pointed out that this innovation was simply a composite of two devices rather than an entirely new product.  Lipman lost his patent.

Nowadays erasers are made from a wider variety of materials, in all kinds of shapes.  The cheapest ones are made of soy-based gum or synthetic rubber while the higher-grade stuff can be made from vinyl, plastic or other gum-like materials.

Erasers come in all kinds of sizes as well.

The thing is, us humans do come equipped with a natural, inherent Big Eraser.

This self-correcting mechanism is called “developing mindfulness.” It includes things like “noticing and rethinking old, dumb habits,” “revamping or creating new routines,” and “practicing the new moves until you get blue in the face.”

Those moves don’t come with buttons.  (For one thing, their names are too long.)

De-bugging your mind follows the same pattern as the one used by software programmers all over the virtual world.  I found a really cool step-by-step while surfing Quora.

Computer programmer Bikash Paneru laid out the process for de-bugging a program that keeps glitching up:

This Smarty Pants does point out the one major downside to trying to shoehorn the de-bugging process into the conundrums of dealing with Real Life issues.  Like my young friend, he noticed that there was no “reset” button you can poke to run the new programming.

“With life, you have to move forward and fix the problem WHILE you live your life….You have got to make sure that the solution you came up with won’t mess up other things that are working right.  You don’t want to make something work while breaking some other things.”

AND THIS IS HOW THE BIG BOYS PLAY….

Self-made millionaire and business book writer Keith Cunningham is regarded as “one of the world’s foremost authorities on business mastery,” it says here.  He’s taught top-flight executives and entrepreneurs not only how to make money, but how to keep it as well.

In this 2015 YouTube video, “Thinking Time – Getting Unstuck,” which is derived from his musings in his 2006 book, KEYS TO THE VAULT: Lessons from the Pros on Raising Money and Igniting Your Business, Cunningham presents a common-sense message about the need to ask the right questions.

Cunningham’s 2017 book, THE ROAD LESS STUPID:  Advice from the Chairman of the Board, is my current “break feast” book.   It sits in my Kindle reader on my computer waiting for the times when I need to get my head reset after yet another series of pounding my head against the wall of my own general dumbness.

In one of the first chapters in the book, Cunningham lays out what he calls the “Five Core Disciplines of Thinking:”

Of these five disciplines, the one that seems to best work with my young friend’s puzzlement is the second one, separating problem from symptom.

Cunningham suggests three questions to ask that will help you get clear about the root problem or obstacle you’re facing:

It’s certainly a great way to avoid looking at a problem that isn’t!

My young friend now has a copy of that book.  I gave it to her.  I also gave her a brand new sharpened pencil with eraser intact.

My lesson from all of this stuff is that “old-style” works just fine.  That’s probably how a particular way of walking got to be one of the go-to styles of walking for people living in other times and other places.

And here we are

As the fateful domino teeters

On the edge of falling over.

I already see in my mind’s eye

The lines of black rectangles

Compounded excuses hang in the air,

Trying to obscure the Real

Of something left undone,

Still unfinished past its time.

Righteous anger wants to be unleashed

And all the insecurities, all the fears

As entropy breaks down structure

And the whole ferments, rotting.

The wait-and-see card is in play now.

So what happens next?

It is a given, you know:

I will continue with this dance.

Whether you continue is yours,

Whether the dance continues

With you or without you is your choice.

Only the uncertainty remains:

How to untangle this mess

How to get back to grace.

6 thoughts on “USE YOUR BIG ERASER”