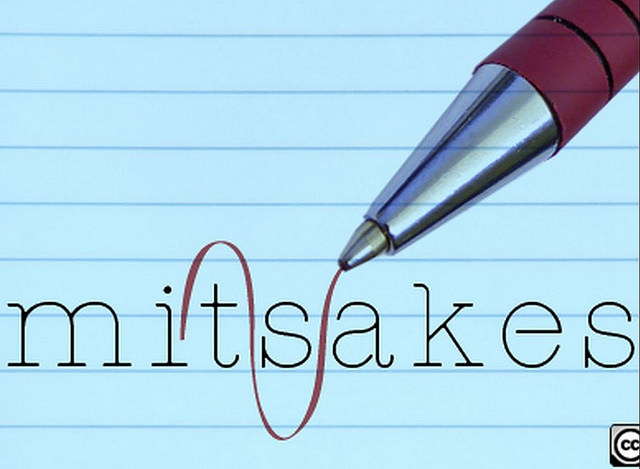 ARGH!  Making a dumb mistake.  Could anything be worse than that?

Making stupid mistakes tends to leave you red-faced and embarrassed.  You trip on an uneven stepping stone because you were running down a muddy path in the dark, and you slip and take a header.

Bunged-up knees, scraped shins, bruises, and assorted bumps and lumps are the prizes that remind you of the dumbness of you.  You already know you’re not supposed to go careening off in the dark, so all you’ve done is validate a fact already known to you.  There is no lesson learned, only one reiterated.  Again.

Everybody around you sighs (or laughs) at the latest pratfall.  Everybody agrees it’s “only human.”  (It isn’t so bad unless you’re the human who made the error.)

THE OTHER KIND OF MISTAKE

But, then, there are the other kinds of mistakes.  The interesting ones, the ones that test your perceived limits and leads you to scratch your head and say, “Huh?  How did that happen?  Can I repeat it?  What can I do with it?”

You need an example?  Okay.  Did you know that brownies are failed chocolate cakes?

Way back when some baker made a big mistake and ended up with a flat, chocolate cookie instead of a tall, glorious cake.  Since there wasn’t anything else for dessert, the cook served it up anyway. Foodies went wild.  Now bakers make brownies deliberately, repeating the original error (and expanding on it) to our great pleasure.

Neil Gaiman is an English author of short fiction, novels, comic books, graphic novels, audio theatre and film.  His notable works include the comic book series THE SANDMAN, a legendary series that one reviewer said “changed the landscape of modern comics” as well as novels like STARDUST, AMERICAN GODS, CORALINE and THE GRAVEYARD BOOK.

I have grown fond of Gaiman’s thoughts.  My favorite quote from the guy is this one:  “Go and make interesting mistakes, make glorious and fantastic mistakes.  Leave the world more interesting for your being here.  Make Good Art.”

My own thought is, since I am going to be making mistakes anyhow, it’s a lot more fun when they are interesting ones.

ANOTHER TAKE ON MISTAKES

In this YouTube video, “What Do Mistakes Reveal About Human Nature,” by Big Think, Harvard  psychologist and writer Dan Gilbert talks about how the mistakes we make are the result of “arguments” between our right and left brains.  Gilbert is fascinated by the whole thing.

Gilbert’s best-selling book, STUMBLING ON HAPPINESS, presents example after example of human foibles and delusions that arise out of the way our human brains are structured.

A TIP FROM A WIZARD

And then there’s American businessman, Roy H. Williams, who wrote a trilogy of books about the “Wizard of Ads.”  Williams spent a quarter of a century studying on why folks do what they do.  He used the empirical knowledge he gained to help his small business clients grow their businesses rapidly and well.

Williams’ tip is this:  “A smart man makes a mistake, learns from it, and never makes that mistake again. But a wise man finds a smart man and learns from him how to avoid the mistake altogether.”

BACKED UP AGAINST LIFE AND BEING

Backed up against life and being.

All the world and its cares press on me,

Jostling against my bubble,

Demanding that I answer

The one Big G asked Adam

When he was hiding under

All those bushes in the Garden

After That Woman and her friend, the Snake,

MADE him bite into that apple-thing.

It was all, all, all their fault.

Down through the ages.

The Dude’s come looking for you,

And, boy, is HE gonna be pissed.

You had one job…ONE JOB…

And you blew it!

The Epic Fail to the Max.

That’s when THAT question

Thunders down from the sky:

And you hear THAT.

So you try to make yourself small.

Through your boring, meaningless routines –

Sorting and stacking leaves and shit,

Organizing the hell out of those messy trees,

Beating up on all the critters,

Trying to line up all those ducks just right,

Trying to make those silly chipmunks

And you know The Big Guy’s waiting.

And it comes again, that question:

Can’t put it off any longer.

(It’s not a real good idea

To ignore The Dude, ya know.

Ya know what happened next.

Backed up against life and being…again.

Just another in a long line of dummies

Caught in the act of failing

To make the prescribed, mandated move

Imposed from on high,

On the verge of getting kicked out of

Designed and organized by some Almighty or other.

And ya know what?

It occurs to me that

At the start of yet another adventure,

At the beginning of one more history…

A true descendant of the lineage of Adam.

20 thoughts on “ON MAKING MISTAKES”