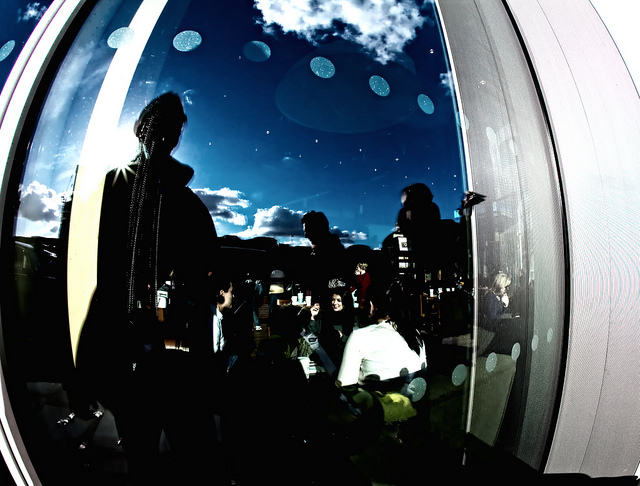 You’ve heard it before and will almost certainly hear it again:  You are the creator of the world you inhabit.  You become what you think.  Every motivational video and podcast producer focused on self-improvement is probably going to whack you upside the head with that one.

Here’s an especially good one published in 2017 by Tom Bilyeu as part of his “Impact Quotes” series.

Bilyeu is an American entrepreneur, the co-founder of Quest Nutrition, maker of a best-selling protein bar.  He is also a powerful motivational speaker and life-trainer.

CLICHÉS ARE TRUTHS REPEATED SO OFTEN THEY TURN INTO BABBLE….

Every advocate for positive thinking and optimism and every feel-good therapist of every flavor, backed up by all the guys in lab coats who are into probing the secrets of our brains and other aspects of our lives, will haul out this old chestnut at some point.

Even the wise guys who aren’t telling us we’re a bunch of delusional creatures will tell you this.  They’ve built all kinds of thought-constructs that prove that it’s true.  You’ve gotta believe them.  They know, right?

My own favorite is American entrepreneur T. Harv Ecker’s take on the matter.  I’m sure you’ve heard it before.

Therefore, once you’re aware of the thought-to-feeling-to-action-to-results progression, you are in a position to change your thoughts.  This will lead you to new feelings and perspectives that will affect the actions you take and the moves you make.  Using this progression, you can get to the results you want…it says here.

BUT THEN THERE’S THE PRIMAL QUESTION

I have to confess that I always get a bit squirmy and fidgety when I get yet another hit of this particular bit of nebulous wisdom that pushes me forward onto center stage as the “World-Creator.”

That sort of implies that the burden is on me to get my own world right.

The thing is, it seems to me that it would be a heck of a lot easier to get a handle on being a big-shot World-Creator if I could just figure out the answer to the Primal Question:

SO, WHO AM I AND WHAT DO I REALLY WANT TO DO IN THIS LIFE?

There are, of course, many opinions, positions and theories about how you can find the answer to that question.  There are all kinds of tools you can use to figure out “The Big HUH?”.  Every self-development book probably contains a dozen or so.

Many people have explored this question and returned from their journeys to explain and expound on the answers they found for themselves.  Some may even ring true for you.

ONE OTHER DIRECTION TO EXPLORE

At the start of the 20th century, University of Michigan professor and sociologist Charles Horton Cooley (1864 – 1929) went against the trend of thought held by his fellow sociologists of the time.  They were firmly committed to considering the development of individuals and societies as separate processes.

The classic utilitarian (and selfish) individualism of economics, which was promoted by the theories about the dynamics of social interaction held by other sociologists of his time, did not make sense to Cooley.

Cooley argued that society and the individuals in them were not phenomena that can be separated.   He said they were “different aspects of the same thing, for a separate individual is an abstraction unknown to experience, and so likewise is society when regarded as something separate from individuals.”

To Cooley, studying how people develop and behave separately from how a society operates was a lot like dissecting a frog in biology lab class.

He said, “Our life is all one human whole, and if we are to have any real knowledge of it we must see it as such.  If we cut it up it dies in the process.”

Out of this way of thinking, Cooley developed the concept of the “looking glass self,” which has become known and accepted by most modern psychologists and sociologists.

Cooley’s theory expanded William James’s idea of the self having the capacity to reflect on its own behavior.

According to Cooley, we see ourselves as other people see us, as if reflected in a mirror.  People gain their identity and form their habits by looking at themselves through the perception of society and other people with whom they interact as well as by directly considering their own personal qualities, he says.

Whether our beliefs about how other people see us are true or not, it is those beliefs that truly shape our ideas of ourselves.

The following YouTube video, “Charles Cooley Looking Glass Self | Individuals and Society” was published in 2015 by khanacademymedicine.  It gives a good, easy-to-understand explanation of Cooley’s theory.

HOLDING UP THE LOOKING GLASS

Tom Bilyeu, who was featured in the first video, is also the host (as well as co-founder and CEO) of Impact Theory, an interview video series exploring the mindsets of the world’s highest achievers.

This next video, “I Am Not What I Think I Am,” was published in 2018 by Fearless Soul  and features life coach Jay Shetty in an interview with Bilyeu.  It presents one way to use Cooley’s “Looking Glass Self” theory to find the life-direction and path that holds the most meaning and mana for you.

Jay Shetty has been called “one of the most viewed people on the Internet internationally.”  Among other things he hosts his own daily show, “HuffPostLive#Follow the Reader.”

In the video, he points out that all of us “live in echo chambers.  We’re just surrounded by the same thinking.  We meet  people who are just like us most of the time.”

Shetty outlines three steps you can make to counter that condition:

This will at least keep you from unquestioningly following what you think the people around you are saying about who and what you are and what you “should” be doing with your life.

It can help you judge for yourself whether a particular lifestyle, with all of its inherent pros and cons, is really how you want to spend your days.  It might put you on the road to finding the life that has meaning and mana for you. 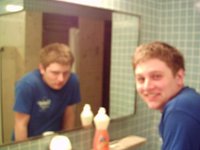 THE WORLD IS MY MIRROR

I have come to the conclusion

That the world is my mirror.

In its many-storied face I can find

Bits that resonate in me,

The hapless spectator with the flat feet.

That awakens as the air is stirred by

The sound of just one other string

Plucked by some insistent hand

That thrums and vibrates through me.

The stories are all around me,

No more mindful of me

Than a stream is mindful of

A fallen leaf floating in it.

But, here’s the deal:

The stories I NOTICE are the ones

That tell me a thing or two

About what I am and who I am

And why I do my walk.

It is the fact that the story snagged my attention,

THAT’S the thing that needs attending.

In the middle of a quiet night in the ‘burbs,

It is mine to sort out.

I am the one that has to go deal with the durned thing,

Because it’s my car, my alarm, my concerns, my fears.

The world is my mirror.

What is it showing me?

Header photo credit:  “Through the Looking-Glass” by August Brill via Flickr [CC BY 2.0]

Thanks for the visit.  I’d appreciate it if you’d share your thoughts and comments.

24 thoughts on “THOUGHTS ARE YOU”