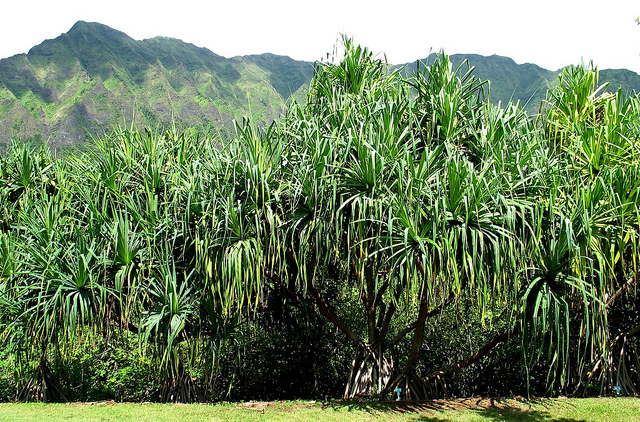 In my own art and poetry, I am wanting a “Polynesian aesthetic” in my work … what I hope is a “native” feeling to it.  Even more than that, I’d like it to be a part of my business.

What makes an object a work of art to me is a feeling that the thing is “special,” imbued with a sense of the person who made the thing and the place where that person grew into the artist he or she is.  Art evokes presence, I am thinking, and that is why it is special.

The process of the manufacture of an art object or the performance of some song or dance or story has to incorporate the history, meaning and cultural identity inherent in the artist and in the place.  If art is to be a real expression of the person who is making it, then it does have to be built out of pieces of that person’s heart.

A business is also a human-made thing.  Could it not be practiced as an art?  Hmmm….

The making of lauhala hats is an honored Hawaiian art form passed down from generation to generation.  Aunty Elizabeth Lee is the acknowledged best of the practitioners in Hawaii and she has been one of the people who has helped to keep the art form alive.

Many of the artists who are Polynesian tell us that in order to produce good work the artist must be “of good heart.”  This, they say, will “show” in the work.

In the hat-weaving, for example, anger and discontent in a person is transmitted through the hands and the weave shows a tension that is not there when the person is calm and at peace.  The hats get misshapen and lumpy.

For this reason, many of these artists seem to make the art they do into a moving meditation filled with ritual and mindfulness.

Ritual is an important part of the Polynesian aesthetic and when ritual is a part of the object then the object becomes an amazing thing.  It becomes an opening and a gateway to a world where everything is interconnected and the parts all move in concert to more cosmic rhythms than are discernible in everyday life.

Usually, when someone is learning an indigenous art form, at some point they will be introduced to the rituals involved in the making of the craft.

A touching You-Tube Video, “Weaving From the Heart,” is a documentary made by Alayna Kobayashi about weaver Lynette Roster and her thoughts about  weaving the lauhala, the leaves of the pandanus tree, into a hat.

The weaver in the video, Lynette Roster, mentions that the weaver “asks” the tree for the leaves that will be used for making her hats.  The weaver thanks the tree and also takes care of the tree which supplies her materials.

This, it seems to me, adds another dimension to the process of weaving a hat.  It adds gravitas, a kind of spiritual “weight.”

Since much of the cosmic, “other” world is hidden from direct perception it can only be approached sideways…obliquely.  That’s why kaona, the hidden meaning, is important.

However, kaona slides away from a direct gaze.

Making this way of doing things a part of modern life is a bit of a puzzlement.  We moderns are so straightforward:  Okay….there’s the leaves….grab a ladder…pick the leaves…and so on and so forth.  Ritual gets us making faces and going, “You want me to TALK TO A TREE?  HUH?”

It gets even more hairy when you’re trying to put together a business.  The hard-nosed bean-counters roll their eyes at you when you talk about “meaning” and  “mana.”  Still, the times they are a-changing.

In this video, where Steve Jobs introduces Apple’s Crazy Ones campaign to investors and his top people, he starts from the premise that marketing is about core values, values that don’t change.

In this video, one of the best marketers of the modern age talks about “meaning.”  He’s talking about “mana” and how his company is going to promote some.  Interesting, huh?

Maybe “meaning” and “mana” has relevance in more than just the world of native arts and crafts.  Maybe it might have relevance for you as well.

What do you think?  Let me know.

This trying to get back to simple,

Reaching towards the place

That is small enough for your dreams.

The details of a life lived out loud can overflow,

Submerging the shine of

The mana-bits that sparkle in you

In an urgent, onrushing tide of

Holding onto even the memory of your own dreams

Grabbing hold with both hands on

The knowledge that you are on your way to

Your own place in that onslaught

Can be a battle against an overwhelming force sometimes.

But, in the quiet time,

When the ebbtide flows out and away from you

And the moon rises up over a calmer sea,

Your half-drowned self can

Sit on some lost and forgotten beach

Just listening to the wind

Soughing through the ironwoods.

If you’ve managed to hang onto that dream –

The one that gives your own life meaning –

If you remembered not to let it go

In the middle of the flood-time,

Sometimes you can catch the glimmer

Of the shine as it starts coming real…

As you start coming real.

32 thoughts on “POST-MODERN MEANING AND MANA”