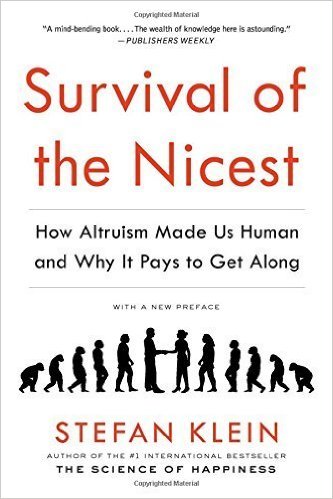 PRODUCT (book):  SURVIVAL OF THE NICEST:  How Altruism Makes Us Human and Why It Pays to Get Along

What Klein does is pile together data from a wide assortment of scientific studies in many different disciplines and then combine them with factoids from history and modern culture in order to look at some Big Human Question from many different angles.  Then he puts the puzzle pieces together and comes up with cogent answers that make a lot of sense.

All this dancing around encourages other people to look at and explore new directions (or resurrect old ones) that may lead to more effective ways of walking in our post-modern age.

It’s a lot like putting together a life-built poem, actually.

EVERYTHING NICE AND RODNEY KING

In his latest book, SURVIVAL OF THE NICEST, Klein puts together the current research on genetics and the brain, economics, social psychology, behavioral and anthropological experiments and just plain old common-sense real-life observations to answer a question that echoes Rodney King’s plaintive query, “Why can’t we all just get along?”

The book does not get into the big moral issues about whether we humans are inherently “good” or “bad.”  It doesn’t lay a lot of shoulds and oughtas on you.

As Klein says, “There are already plenty of convincing systems of moral philosophy, and the only question is why we follow them so seldom.”

What this book does instead is take a look at what scientists and other observers have discovered about human nature.  Surprisingly, these findings back up and validate what all the wisdom-systems of the world have been saying:  Humans are built to connect with one another and help each other.

Altruism, the urge to help others, is locked into our genes side-by-side with alpha-dog tendencies and the urge for autonomy.

Cooperation and collaboration were the tools our ancestors used in the distant past to upgrade human existence, step-by-step.

Our predecessors of long ago lived in caves and other nasty places and spent their time running away from lions and tigers and bears and placating bullying neighbors while trying to keep their children from starving.

Because our ancestors banded together and developed ways to work with one another towards common purposes, many of us today have been raised to a very different level of existence.

Now we live in cities, towns and communities that depend on the efforts of many good folks to keep them running right.

Some of us work on keeping the rest of us from killing off all the lions, tigers and bears who used to feed on our ancestors.

Klein says about all these scientific studies that he has encountered, “A central discovery is that egocentrics do better only in the short term, but in the long run, it is mostly people who act for the welfare of others who get ahead.”

The “me-me-me” guys don’t get it all their way, it seems.

Any act of kindness has a ripple-effect that spreads, the scientists have found.

In one report published in the New England Journal of Medicine, there was a story about an incredible cascade of altruism that was triggered in 2007 by a 28-year-old man who decided to donate a kidney to anyone who needed it.  He gave away the organ without expecting anything in return.

The young man’s donated kidney was transplanted into a 53-year-old woman in Arizona.  Her husband, who was unable to give her a kidney because of incompatibility, offered to donate his kidney to someone who needed it.

The recipient of that kidney was a young woman in Ohio whose mother then donated an organ.

This chain continued.  Brothers donated because someone had helped their sisters, friends gave their kidneys because some anonymous donor had saved their buddy’s life. The chain crisscrossed America.  It ignored racial boundaries.

No one was forced to undergo an organ removal.  Donors often waited months to find a compatible recipient to whom their kidney could be given.

At the end of the study, there had been a total of 22 operations.

The last one reported was an organ donated by a young African American woman in Ohio.

None of the donors gained any personal advantage from their donation.  They were all simply acting out of gratitude that some unknown person had given back a life to their loved one.

Stories like this one show that kindness really is contagious.  People who see other people being kind to each other are more willing to be kind their own selves.

NOT ALL SUNSHINE AND MARIGOLDS

I also have to say this book is not all sweetness-and-light, mostly because we humans are not.

The Takers of the world, the Freeloaders and the “all-for-one-and-that-one’s-me” guys in the world make sometimes insurmountable problems in the easy flow of “all-together-now.”

Studies delineate all the reasons why the Dark Side of humans evolved.  There were good life-and-death reasons for it.

All of us are made of both sets of impulses – the lion and the lamb lives in us all.

Klein is assiduous in pointing out the pitfalls of ignoring the actions of the ones who refuse to get with the program.  He even suggests ways to counter such self-serving moves.

As Klein says, this flood of findings by scientists can help us design ways to encourage people’s more generous propensities and discourage their thug tendencies.

Thinking on these insights can help us develop ourselves into individuals who can build the sorts of sustainable communities in which we want to spend our lives.

Klein lays out various strategies that help encourage and nurture the loving-kindness that lurks in the human heart.

I recommend this book as a thought-provoking read, one likely to have you coming back to it again and again.

Many of the wise guys tell us that we create the worlds in which we live.

In this book Klein presents an array of scientific proof that says we can, indeed, work to make a paradise right here on earth.  All it really takes is getting into the habit of showing loving-kindness to one another.

As Klein suggests in his closing sentence in this book, “The journey begins with curiosity.  By experimenting with generosity we have nothing to lose and much to gain, for selflessness makes us happy and transforms the world.”

The whispers of a thousand thousand years of wise guys

Beat out a rhythm in my head

Under the dancing light of Indra’s Net

That stretches into infinity.

A totally lovely concept, that…

A premise to dream on.

But, what can you do

When your determination to stand harmless

That insists on creating a maelstrom of discord and thorny prickles

That stab and poke and irritate,

That leaves a wake of broken dreams behind.

What can you do?

Ahimsa thrives among the gentle ones,

Who heed the call to hug and hold each other warm

Through sunshine and starlight,

Who dance and laugh in the rain,

But then there comes one fool

Who insists on blundering about

With his eyes held stubbornly shut

Banging into everybody else’s dance,

Stepping all over everybody else’s feet.

As this arrogant disregard

Knocks surrounding dancers off their feet

And into other people’s spaces,

And the disruption ripples across the dance hall floor

Ahimsa does not work then.

It cannot help to show the way.

And now you’re down to that one penultimate set of moves,

The one you always dread,

The one where you put on your gnarly troll-girl suit,

The one where you grab that fool

And you march him on out that dance hall door….

The one where you throw away another piece of your own self.

And you know before you even start

That in the aftermath of all that,

When the hall shuts down and the floor is clear,

And the dancers all go home,

There you will be, sitting in the dark,

Crying for that still-blind fool

Wandering outside in the cold.

24 thoughts on “REVIEW: SURVIVAL OF THE NICEST”