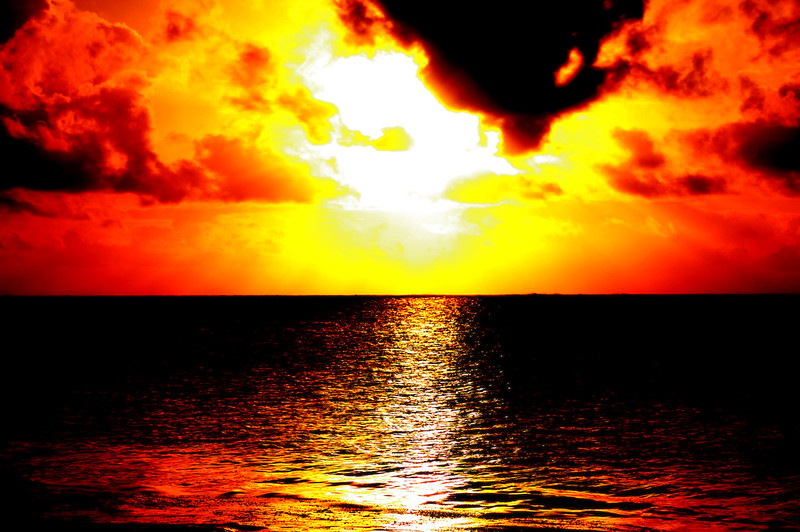 Another IPS (Inner Peace Symptom): an understanding that every form of Making is ultimately another way of practicing being human.  [Humans make things.  It’s how we connect with one another and with the World.]

I am pleased when I can wander through poet Mary Oliver’s words and borrow her eyes and her heart to see again the beauty and the mystery of Life-Its-Own-Self.  The words remind me:  I am not alone.

That one helps me get back to peace again amid the hurly-burly bustle and the noisy push-me, pull-you tumble fades away.  AHHH….

My favorite Oliver quote does not come from a poem.  It was part of a rare interview she gave with Rachel Martin on a 2012 National Public Radio’s “Weekend Edition Sunday.”

She said, “I said once, and I think this is true, the world did not have to be beautiful to work.  But it is.  What does that mean?”

That, I think, is a worthy big question.  It’s certainly big enough to fuel a life-long work.

To answer the question, Oliver spent her life in the woods, standing among the trees and the weeds and the wild, looking at and noticing what was in front of her with her heart open to it all and her notebook and pencil at the ready.  She paid attention, deeply and well.

And then she wrote about it so the rest of us could see it too.

She also said, “One thing I do know is that poetry, to be understood, must be clear.  It mustn’t be fancy.  I have the feeling that a lot of poets writing now are… they sort of tap dance through it.  I always feel that whatever isn’t necessary shouldn’t be in a poem.”

WOMAN OF A THOUSAND SONGS

Mary Oliver died at the beginning of 2019 at the age of 83.  During her long and illustrious career that spanned over five decades, the prolific nature poet put together 26 collections of her verse, many of them best sellers.

There were also a number of prose books as well.  She routinely put out a new book every couple of years, it seems.

She was that rare phenomenon: a poet whose work sold strongly.

Her prose books include two on the craft of poetry.  A POETRY HANDBOOK and RULES FOR THE DANCE: A Handbook For Writing and Reading Metric Verse have been widely used in workshops and programs for beginning writers and wanna-be poetry appreciators.

A consummate artisan and word-lover, Oliver lays out the basics beautifully and well.  She was a popular educator.   She held the Catharine Osgood Foster Chair for Distinguished Teaching at Bennington College until 2001.

In 1984, she received a Pulitzer Prize for her fourth book, AMERICAN PRIMITIVE.  In 1991 her HOUSE OF LIGHT won both the Christopher Award and the L.L. Winship/PEN New England Award and in 1992, her NEW AND SELECTED POEMS won a National Book Award.  They were only a few of the many honors she received for her work.

Her work frequently appeared in many national magazines.

Oliver would probably have won the “People’s Choice” award (if they gave out that sort of thing in the poetry world).  She was often dubbed “America’s best-beloved poet” despite some sour critic’s disparaging snark about her being “the poet laureate of the self-help biz and the human potential movement.”

A profoundly private person, Oliver rarely gave interviews, preferring to let her work speak for itself.

One of the best overviews of Oliver’s work and life can be found in the 2017 New Yorker magazine article by Ruth Franklin, “What Mary Oliver’s Critics Don’t Understand.”  Click the button below if you’d like to read it.

As one who touched the hearts of many people with her unadorned, straightforward language and clear-eyed, humble observations of the natural world in all its glory as well as its impermanence and shadows and her joyous celebration of the Great Mystery that is Life-Its-Own-Self, Oliver was often quoted by clerics in their sermons, even though she admitted that she personally was not comfortable with religious institutions and dogma.

It didn’t matter.  As a poet, Oliver was determined to make her life out of the simple but radical practice of paying close and deep attention to what was around her, and somehow, in doing so, she was reaching for the Divine.

Composers like Ronald Perera, Lori Laitman, and Augusta Read Thomas set her work to music.  Celebrities like Laura Bush and Maria Shriver and Oprah Winfrey were staunch fans, as were thousands of Instagrammers who treated her words as gospel.

Throngs turned out for her popular public readings as if she were some kind of reluctant bookish rock star or oracle.  Many others read and spoke her work in public presentations.

In the following 2011 YouTube video, “What I Have Learned So Far” by Mary Oliver, the poem is spoken by students at Marquette University.

Poetry therapists found her uplifting sensibility well-suited to their work.

Poetry therapy is a real thing.  It has its own national (American) organization, The National Association for Poetry Therapy, which was incorporated in 1981. There is even an International Federation for Biblio/Poetry Therapy.

The American group provides credentials for poetry therapists, a sort of subculture among therapists (like the guys who use massage or hypnosis), who have successfully completed 440 hours of training and study. The international group has also developed a similar program of training and certification.

The idea that poetry can be used to help people who are suffering from inner turmoil apparently originated with New York psychiatrist Smiley Blanton.  In his 1960 book THE HEALING POWER OF POETRY, he wrote:

“Suppose you are depressed and you read a poem about sadness.  If your feelings overflow, if you find yourself crying, then your sadness is reduced. You realize that others have suffered, and the communion of feeling is helpful.. It is like being able to share your grief with someone else, someone who understands.”

The book, with its forward by Norman Vincent Peale, was reissued in 2012.

Poetry therapists use the power of verse that connects people heart-to-heart to help their clients explore and recognize their hurts and their brokenness in the hope that this will help them start to heal.

Some poems work; others not so much. Often the work of 19th century ecstatic, mystical, vision-walking poets – the “wisdom” poetry — serve this purpose better than other more modernistic offerings.  Short poems work better than long ones.  Clarity works better than obscure fancy-dancing.

Because Oliver’s poetry is often short and always clear, they lend themselves to the focused discussions the therapists use to help their clients and serve as models for poems the patients write for themselves as they work their way towards a better sense of self and a more stable emotional balance. If you’re interested in learning more about Poetry Therapy, you can click on the button below for an article put together by Louise Hoffman, PhD, for the GoodTherapy.org people.

The online service, founded by therapist Noah Rubinstein in 2007, is an information center for people looking for help and provides information about and access to a network of member mental health workers from over 25 countries.

One smile-inducing story is a new crowd-funded book store, The Poetry Pharmacy, that opened up in 2019 in a quiet small town, Bishops Castle, in rural Shropshire, on the borders of England and Wales.

(You can read Sheryl Grant’s story about the venture by clicking on the store name above.)

The store is the magical brainchild of writer Deborah Alma, self-dubbed the “Emergency Poet,” who spent years traveling round British festivals and literary events – tongue set firmly in cheek — in an old ambulance giving one-on-one “consultations,” listening to her patients’ tales of woe and “prescribing” a healing poem for them.

I’m not sure whether the physical store is open during this time of the Covid-19 pandemic response madness, but it does sound delightful.

Who wouldn’t love a place where “poems are packed in jars and prescribed for heartbreak or stress, desire or mindfulness”?  Alma’s consultations continue; tea and cookies and all sorts of wonderful books are served up in a charming Victorian-style setting.

I do know that you can access the store’s online offerings by clicking here:

A connoisseur of the absurdly profound once said,

“When a thing is true, you can let it alone.”

‘Cause the thing sits itself down in your bones

And chimes out a clear pure note

That floats into the morning sky

When someone tells its story.

And you don’t even have to wonder

How or why such a thing might be, could be so.

Unless, of course, you are slow on the uptake like me

And you waste a lot of time wandering around

Listening to all the chiming

And looking for the bells.

Thanks for your visit.    I’d appreciate it if you would drop a note or comment below and tell me your thoughts.