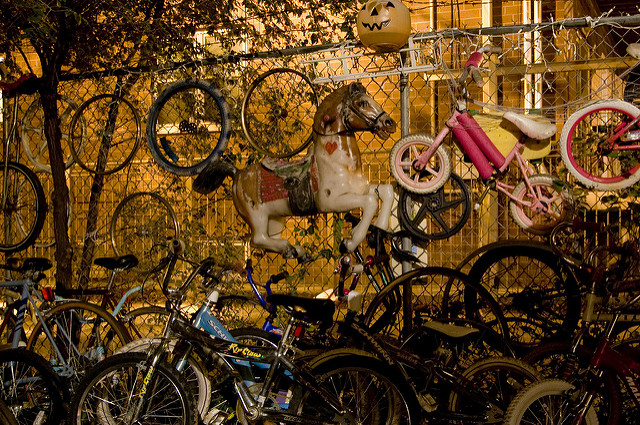 Hands-on (often inept) fooling around with stuff has been called “tinkering.”  The top definition for the word “tinkering” in the online collaborative Urban Dictionary is this:  “to mess around with something and you don’t really have a clue what you are doing.”  (The regular dictionary definitions are pretty boring.)

It’s to honor the Urban Dictionary spirit of tinkering that Karen Wilkinson and Mike Petrich, the co-directors of the San Francisco Exploratorium’s Tinkering Studio put together the book, THE ART OF TINKERING.

In the introduction to this amazing collection of wonders by 150+ Makers who combine art, science and technology to put together incredibly diverse works, Wilkinson and Petrach tell us that tinkering is “more of a perspective than a vocation…. It’s thinking with your hands and learning through doing.”

The book grew out of the work being done by a group of artists, scientists, developers, educators and facilitators who play with many different sorts of tools, materials and technologies at the museum’s “Tinkering Studio” and at the PIE Institute.

This gathering of fun-loving Makers bent on giving us all a taste of the joy of tinkering was the result of a project called the PIE (Play-Invent-Explore) Network.  The federally funded project began as a collaboration between the MIT Media Lab’s Lifelong Kindergarten Group, the Exploratorium, and several other museums,

They started by experimenting with science and art activities that developed into innovative educational activities suitable for wonderment, playfulness and learning about the world around us.

The Tinkering Studio at the Exploratorium has become an inspiration for tinkerers and other wanna-be Makers since it began in 2009.

This 2012 YouTube video published by core77inc  gives a taste of what the sessions held in the Studio feels like:

The book has a slew of advice about how you, too, can play at tinkering.

Here are my favorites:

The best advice of all is this one:  You need to balance autonomy with collaboration.

Autonomy – going solo – helps you get to your own kind of mastery.  You learn how to work with tools and materials.  You develop your own skill and knowledge.  You grow your confidence.

Tinkering with other people can be a blast.  Collaboration helps you clarify your ideas for solving a problem because you have to be able to explain them to your partners in a way they can understand.   (Otherwise they won’t be able to help you get where you want to go.) You and your partners will have different and various skills and ideas that can be brought to bear on the problem.  Cross-pollination is likely to occur and that could lead to other wonders. Best of all, everybody can be a part of something larger than themselves, and that, as any wise guy will tell you is a very good thing. All of the pictures of the hand-made sailing rail-cars project above were taken by Gever Tulley, the founder of Tinkering School, an internationally known summer program.   He also started SF Brightworks, an innovative K-12 school in San Francisco emphasizing experience-based, hands-on experiential learning.

Tulley is the author of the book FIFTY DANGEROUS THINGS (YOU SHOULD LET YOUR CHILDREN DO), among others.  As he has noted, “I have made it my mission to reintroduce the world to children:  the real world as revealed through unscripted, hands-on, meaningful learning experiences.”

MAKING ROOM FOR THE CREATIVE

The Creative has no limits, it is said.

It moves along, coursing through our days

Tumbling over the rocky places,

Trickling through the hard

As runnels and creeks,

Soaking on down to run deep

And springing back up as

Tributaries all, running through the World

On their way to the Sea of Dreams

Where all potentialities roll around playing.

It keeps on moving, the Creative,

Carrying away bits of our landscape

And depositing them somewhere other,

Building up and tearing down

The structure of our lives.

It’s just there, the Creative,

Thanks for your visit.  I’d appreciate it if you would drop a comment or note below and tell me your thoughts.

16 thoughts on “HOW TO MESS AROUND”