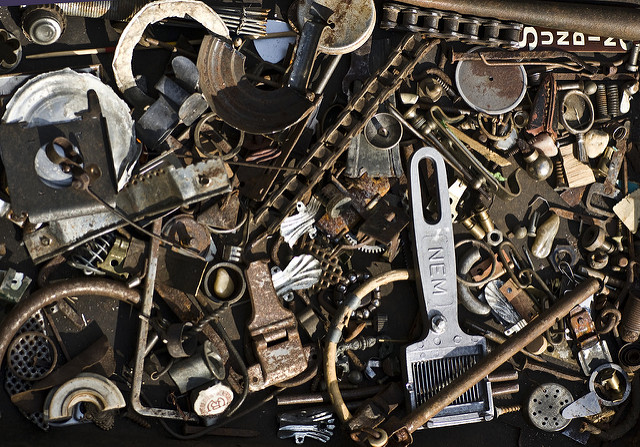 Playing with your materials, learning a new technique for making a something, honing your craftsmanship and your ability to go further and further into your medium….that’s the glory part.  That’s the part that makes your heart fly.

One day in the middle of doing all this neat stuff you look up and, gee-wow…you’ve gotten way good at the thing you’ve been called to do.  You’ve also got stacks and stacks of, well, stuff.

You now own skill-sets like you wouldn’t believe, but you’re tripping over all the detritus you’ve accumulated and it is interfering with your ability to move any more.

THE DOWNSIDE OF FLYING WITH ANGELS

Novelist Umber Eco has his Franciscan sleuth William of Baskerville expound, “The order that our mind imagines is like a net, or like a ladder, built to attain something.  But afterwards you must throw the ladder away, because you discover that, even if it was useful, it was meaningless.”

Art is like that, I am thinking.  You work on building some sort of construct that will express or explain some phenomena you’ve encountered.  Out of thin air, you make a something.

And once you’ve done it – whether you’ve been successful or not at coming close to whatever truth you think you’ve seen — it sits there.  It turns into a thing that has to be named and catalogued, displayed or stored, dusted or shined up or ….whatever.

It isn’t the thing you make that is all-fired important, really.

The process and the journey you make getting to that thing is actually what your heart is aiming for.  The making of the thing is the Real in all this….

But then, the thing just sits there.

Stuff piles up in doorways and stacks and piles of stuff cover up windows and take up floor space.  Shortly thereafter your creative impulse gets a bad case of constipation and the flow stops.

To be exclusively concerned with art leads to bulging warehouses full of half-remembered insights.

Hmmm.  The eternal conundrum for every artist I’ve ever known – myself included.

My na’au, my gut, is a bit of a nag.  It whines and whimpers and spends a lot of time making up catastrophic  futures. I get annoyed with it.

I have to keep reminding myself:  Your gut’s job is to be hungry.  Its job is to feed you and keep you safe and warm and good stuff like that.

If you can sell the thing you made and get some sort of (decent) renumeration, my gut tells me, you won’t have to make a steady diet of ramen noodles or live in some cardboard box in an alley or something.

My gut points out that it’s really hard to do artwork when you’re living in a cardboard box or under a bush.  It do go on….

My gut is in charge of survival scheming.  My gut wants me to do marketing and turn the Beauty I make into something that other people will spend good money to get.

Every creative gets to do this dance.  Maybe it’s part of the deal.  Who knows?

Obviously, there needs to be some negotiating when heart and gut are at odds.  Otherwise all the push-me, pull-you action will drive you crazy.

THE FORK IN THE ROAD

Finding your own voice requires flying off into strange dimensions and risking getting lost.  The edge of Making is uncomfortable.

On the other hand, traditional marketing is basically about making other people comfortable.

It is a truth:  The traditional marketing mindset is not likely to lead to new or different art.  It mostly leads to same-old with maybe one or two not-so-major alterations so that the whatever-it-is can be touted as “new and improved.”

The theory behind the traditional marketing mindset is that people are more likely to buy something with which they are comfortable.   Strangeness is not comfortable for most people.

One of the acknowledged best of the marketers today is Seth Godin.  Here’s a YouTube video, “Seth Godin:  The Art of Marketing,” put together by TheArtOf.com that touches on his thoughts about marketing.

As a confused creative, you might find it more palatable than most marketing riffs.  As Godin points out, marketing is no longer just about selling average products to average people.  The Internet, he says, has changed all that.

Some art purists would say — in tones of high-brow disdain — that all marketing is “pandering” to what other people like, what other people know, what they find familiar (and what is similar to whatever some star in their firmament owns or possesses).

The purists accuse the ones who are successful at marketing of being pimps, of “selling out,” and so forth and so on.

Mostly, I notice, the creatives who are good at marketing are really pleased when the things they’ve made have found good homes with other people who have made rooms in their lives for them.

The best sign on a shop window, after all, has to be the one that says “SOLD OUT.”

“Product” has to be concerned with marketing or it ain’t product.

The end-result of the process that is Art-for-art’s-sake and not product becomes like those pictures Mommy tapes to the refrigerator and like those misshapen clay ashtrays she proudly displays on the coffee table.  Meh….

The thing the purist in you has to remember is this:  Other people are not obliged to pay attention to anything that disconcerts them or that requires effort for them to understand.  They’ve got enough on their plates already and for the most part it is not a part of their jones to make themselves uncomfortable.

Because of this, they may not be ready to exchange their hard-earned bucks for your unsettling visions.

Developing your own voice, it seems to me, is a good thing.  Using it to scream and rant in other people’s ears is not.

Basically what marketing for you as an artist boils down to is learning to hold another person’s hand and taking them little by little into your new-to-them, different world and introducing them to the wonderments you see a little bit at a time.

It becomes another dance.  In it you explore their world as much as you encourage them to explore yours.  In it, you speak heart-to-heart and try to give them a piece of your vision that they will be able to incorporate and integrate into their own world.

Then, when you’ve done all that, you can ask them for their support.  You ask for their permission to keep doing what you do.

If they like it, if they like you, then you will be able to keep on doing your dance (without all of the boxed detritus lying around).  And isn’t that all you really want anyhow?

It’s part of an ongoing project of his to collect the top ten Rules of Success held by assorted successful people in every field of endeavor.  He’s put together videos featuring writers, artists, musicians, film makers as well as assorted business people.

You may want to check out Carmichael’s website, #BELIEVE ( EvanCarmichael.com .)  One of my favorites is his book, YOUR ONE WORD:  The Powerful Secret to Creating a Business and Life That Matter.

Writers are always selling somebody out.

Poets only sell out themselves…

Or (more often) we chop pieces off ourselves

And try to give away those pieces to

Turning knife-sharp eyes to the task,

Looking for the evidence of the lies

Other people tell themselves and the gullible world.

Writers pull out other people’s entrails,

Poke around looking for signs that tell out loud

That died along the way.

Writers look for portends in those entrails,

Omens that will clarify what the future holds.

‘Course the subject of the study is dead by then.

(There’s not much future for a gut-amputee.)

Poets, on the other hand,

Are writers who inflict

Such Holmesian techniques  upon themselves.

The way starfish grow back arms.

Ready for yet another ripping out,

Poets hunch over with the scalpel and forceps

In their own gloved hands,

Subjecting their own innards to

The scrutiny of their own x-ray eyes.

Picture credit:  Collection of Leftovers by Anne Lindblom via Flickr [CC BY 2.0]

16 thoughts on “WHAT DO YOU DO WITH THE LEFTOVERS?”