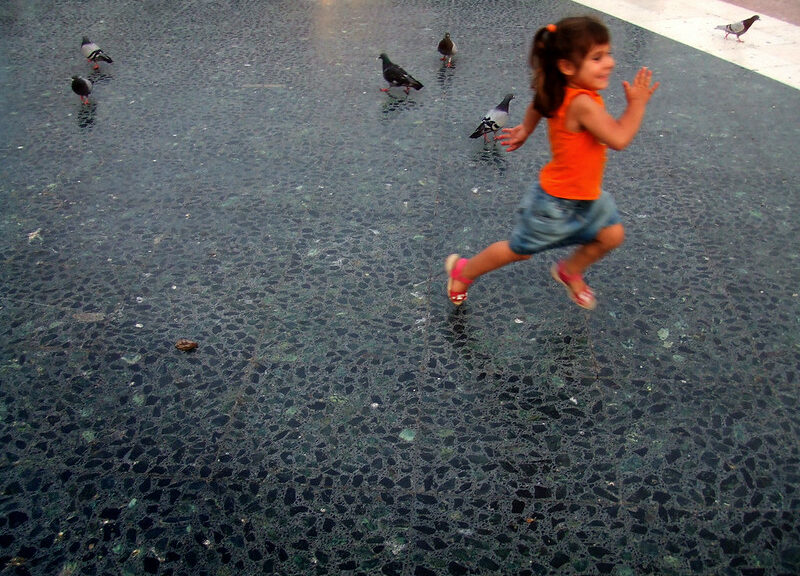 Throughout the ages humans have gnawed on the conundrum of getting to “happy.”  We know we want it.  We’ll do a lot to get there, we say, as we set up and set out on some course of action or other to “pursue” our own kind of happy.

There are whole libraries of wisdom-words from past generations of sages and wise guys, from the research and cogitations of scientists and other smarty-pants over the past half a century, as well as from the everyday musings and head-scratchings of the man (or woman)-on-the-street that we can tap.

Everybody agrees.  Happy is better for us humans – physically, mentally, and spiritually — than not-happy.

What people may have a hard time agreeing about, however, is what “happy” is and where it might be located and how we are supposed to get ourselves over there into the “happy-place.” And there are more than one school of thought about all this happiness stuff as well.

THE TROUBLE WITH LOOKING FOR HAPPINESS OUTSIDE OURSELVES

It seems to me that the problem with the whole “pursuit” thing and with seeing happiness as an end-goal or even as something that is outside our own selves is addressed in this extraordinary YouTube video, “Happiness,” uploaded in 2917 by Steve Cutts:

Ouch!  That one sure feels familiar, doesn’t it?

If the Big Happy is not in us, then we are likely to be in for a really rough struggle getting to our “happy place” and the odds aren’t looking so good for us.  Recovering-Control-Freak Me has a really hard time accepting that one as a viable, sustainable option.

In the mid-1990’s a couple of social scientists, Rick Foster and Greg Hicks, began a most intriguing study never before tackled by smarty-pants of their ilk.  They wandered around the countryside and then the world asking, “Who is the happiest person you know?”

In every town or village or organization the researchers visited, there was usually some consensus about who the happiest-seeming person was in that place.  In the course of their three years of research the pair tracked down hundreds of extremely happy people.

Most of the people the researchers interviewed were just ordinary folks.  They embodied a wide variety of belief systems, cultures and family backgrounds.  They came from every socio-economic level.  They ranged in age from 16 to 101 and represented all races and every kind of social relationship construct as well.

Like all good scientists, the first thing the researchers did was ask the people who did it best to define what “happiness” was.

Here’s the definition they formulated out of all the answers they got:

“…true happiness is a profound, enduring feeling of contentment, capability, and centeredness – the 3 C’s.. It’s a rich sense of well-being that comes from knowing you can deal productively and creatively with all that life offers – both the good and the bad.  It’s knowing your internal self and responding to your real needs, rather than the demands of others.  And it’s a deep sense of engagement – living in the moment and enjoying life’s bounty.”

That definition feels just about right, it seems to me.  It’s sufficiently complex and complicated enough to be real, yet simple enough to get your head around.  It’s just ordinary in an extraordinary way.

The researchers collected stories and more stories. Then they started analyzing the stories.

Happiness, it seems, doesn’t come from any specific circumstance.  Happiness begins with each person and the patterns of choices they make that work together to create a kind of synergy, an energy field, that builds up around them and affects how the mega-happy people move and what they do.

It also became evident that how these ultra-happy people move and what they do affect the way they see their worlds.  The perspectives they develop as a result of their actions generate (bet you guessed it!) their own brand of happiness.

As Foster and Hicks studied these stories, they began to notice certain patterns that kept repeating themselves in the stories they heard.  The researchers found that every one of the happy people they talked to consistently used the same nine foundational choices to build greater happiness into their own lives.

Integrating the nine choices into the way they lived their lives gave these happy folks lives filled with meaning and mana.  The side-effect of that was the feeling of happiness, as defined by those who lived this way.

Using the patterns they discovered, Foster and Hicks made a “happiness model” that became the basis for their book, HOW WE CHOOSE TO BE HAPPY:  The 9 Choices of Extremely Happy People – Their Secrets, Their Stories, which was first published in 1999.

The book, one of the first of its kind, was an instant bestseller.  It has been on bestseller lists ever since.

If you look over the table of contents in Foster and Hicks’ book, you’ll get a quick overview of the nine choices:

You will note, I think, that none of this stuff is rocket science.  They’re just regular stuff you’ve probably been told since you were a kid that it’s good to do.

The moves the authors have highlighted are not extraordinarily complex or anything.  They are things anybody can do.

You may, however, want to check out the book to find out how (and why) each one works and ways you can develop and expand them in your own life and what they can do for you.

I think it’s just cool to know that these simple yet profound choices have actually been scientifically and empirically proven to work over and over again by thousands of folks who’ve tried them since the researchers constructed their roadmap.

Happy happens when you do these things.

THE REST OF THE STORY

The Foster-Hicks happiness model of nine choices was used all over the world by universities, corporations, hospitals, and churches and has been acclaimed by major research institutions as a groundbreaking analysis of how people create happiness and as a key to the mind/body connection.

Through the years since the book was published the authors continued to dedicate themselves to studying people and communities that thrive.

Their work, which apparently generated a roadmap to happiness, physical and physical well-being as well as success, had them traveling to very many places in all the seven continents of the world (even Antartica).

The researchers are sought-after lecturers and have written several other books that grew out of the paths they’ve chosen to follow using their roadmap.

They’ve collaborated with others to develop intriguing ways to use the nine choices to form a synergy of energy that also proved to be good for the world around its practitioners in the worlds of business, medicine and social change.

It isn’t often that a person comes across something that delineates a lot of what sounds true and weaves these truths together into a useful and useable form.

What absolutely thrills me is knowing that the researchers didn’t go ‘round to experts or extraordinary people with special knowledge and outré experiences to generate some esoteric wisdom thing.

Foster and Hicks did not go around like metaphorical lepidopterists chasing down magical butterflies, anesthesizing them and sticking the dead bugs onto foam-core backings with pins, trying to analyze some dead thing to get insights into the living, breathing version.

They just stopped in and talked to neighbors and regular folks about ordinary, everyday stuff as well as the Big Questions and reached their conclusions and built their theories out of the lives these people live. The lives of the people who were interviewed went on as before.  The results of the stories that were analyzed by the researchers and the systems, programs, and applications that were developed out of Foster and Hicks’ analyses, however, made a huge impact on the rest of the world.

No unicorns were harmed in the production of this work.

One of my favorite passages in the book comes from the introduction written by the authors for one of the later editions of their book.  They say,

“Is happiness within your grasp?  Yes.  Have we created a tangible, clear guide to happiness?  Yes.  Can we make you happy?  No.  You have to make yourself happy.  What we can give you is a portrait showing you how to grow, learn and change.”

That one, too, sounds real.

(Finding Out What Nourishes You)

So maybe they were wrong –

All the ones who told me

“Happy” was all about

Filling up a treasure house

Seems to me that treasure house thing’s a crock:

Who wants to be the one to dust all that stock?

The ones who said having

All the toys made the birds sing sweeter,

Who wants to fix all those ridiculous toys,

That blink and squeak and make all that noise?

Maybe they were lying –

The ones who said trudging through

Bringing home the latest and the greatest

The new and improved, the bestest of the best

Would take me to incredible heights of ecstasy…

When the one who pays the bills is me.

They were definitely wrong.

Thanks for your visit.  It’d appreciate it if you would drop a note or comment below and tell me your thoughts.

8 thoughts on “HAPPINESS IS A SIDE-EFFECT”