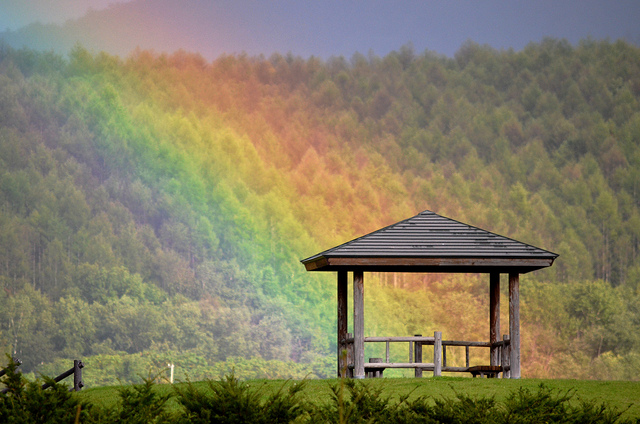 We don’t usually think about poverty in terms of time.  After all, each one of us has the same 24 hours every day, right?  How can one person be “time richer” or “time poorer” than another person?

And yet there is this notion of “time famine” that’s been around since the 1990’s.  It’s an epidemic, those guys who look at population trends tell us.

In this brave new post-modern fast-paced world, more and more of us are wandering around moaning about how we don’t have enough time to do all the everything we have to do.

One eye-opening YouTube video is “The Time You Have (In Jellybeans)” published in 2013 by zefrank, a funny-guy philosopher I like.

The video graphically illustrates the ways an average American uses time.  It also asks a very important question at the end.  This video has been viewed by millions of people since it was posted.

LOOKING AT THE SIGNS

Over and over they try to squeeze just a little bit more productivity out of their daily time allotment. The result often is a mountain of paper charts, large collections of time-saving devices, systems and apps…and not much relief, it seems.

The symptoms of time starvation include the feeling of being rushed, of time “getting away” from us, of always playing catch-up, and of trying to “make do” and “do more” with our available time, an inherently finite and immutable resource-turned-commodity.

Researchers who study the “time-starved” say time-poor people report being more stressed and less satisfied with their lives than other folks.

They often feel overwhelmed by their everyday lives.  They report a constant feeling that they have no time for the things that matter most to them.

Somehow, they feel as though they are being squashed flat and are turning into extras in a zombie apocalypse movie.

STARVATION IS BAD FOR YOUR BODY AND MIND

Time starvation has very real physical and psychological effects.  It plays havoc on your state of well-being.

One groundbreaking national study of more than 10,000 employees in the United Kingdom found that employees with a sense of time poverty called in sick three times more often.

Even more disturbing, the study found that the mortality rate of those who felt chronically pressed for time was also three times higher at the same age.

Apparently, more money doesn’t seem to help.  In fact, according to a Gallup poll conducted in 2011, the more money you have, the more likely you are to suffer from time-starvation.  The poll concluded, “The more cash-rich working Americans are, the more time-poor they feel.”

WHAT YOU SEE IS WHAT YOU GET

The thing is, all of the wise guys since ancient times have told us that “time” is actually an illusion.  Events happen — one after the other.  Period.

How we feel about the whole megillah is what we use to build the world we make for ourselves.  The studies by smarty-pants dressed in lab coats keep on validating and confirming this.

The following YouTube video, “How To Have the Time of Your Life”, is a TEDxTotnes talk featuring Martin Boroson, the creator of One-Moment Meditation, which is a type of meditation training that helps people get to one moment of focused attention by “breaking through the time barrier” (it says here).

Boroson wrote a book about this meditation training he developed, ONE-MOMENT MEDITATION:  Stillness for People on the Go, that is now available in 12 languages and that Oprah featured as a thirty-day series on stress relief.

Boroson is an interesting man.  He studied philosophy at Yale and earned an MBA from the Yale School of Management as well.  A Zen practitioner, he’s worked as a psychotherapist and theater producer, among other things, applying ancient wisdoms to modern day life.

In 2008, the Pew Research Center, a nonpartisan American fact tank based in Washington, DC, asked middle-class Americans to prioritize what was important to them in their lives.

Sixty-eight percent of people responded that having free time was very important — outpacing the importance of having children (62 percent), a successful career (59 percent), being married (55 percent), or being wealthy (12 percent).  Upper- and lower-class respondents essentially gave the same answers, the Pew study noted.

There were a slew of studies done around this factoid too, of course.

Anybody who’s old enough to spend time working for somebody else has probably noticed that some people have more control over their own 24 hours than others.  A bunch of them even have control over YOUR time.  Some of the researchers locked in on that.

It turns out that it’s not how much “free time” away from work or other obligations we have that affects our psychological and physical health.  It’s the amount of control we perceive over our own time that counts.

Anybody who says, “Other people make the decisions about when I work,” and “I can’t decide for myself when I take a break” is likely to consider themselves time-poor.

A fairly new concept, “time affluence,” has risen up as a result of these studies, and a new category of lab-coat dudes and dudettes was born.

Tim Kasser, the researcher credited with coining the name, is the author of a book, THE HIGH PRICE OF MATERIALISM, which details how various studies say our well-being is adversely impacted when we organize our lives around material results.

The book goes on to propose assorted changes we can make in ourselves, our families and our society that could correct that.

Kasser also published a separate paper on the results of four empirical studies that documented the positive effects of feeling time-rich.

In it Kasser pointed out that these four studies showed that time affluence relieves stress, improves physical health and leads to greater involvement in the community, more positive ecological behavior and increased well-being, including job and family satisfaction – all at rates significantly higher than just making more money and getting more stuff.

My favorite thought on all this comes from Woody Tasch, the author of INQUIRIES INTO THE NATURE OF SLOW MONEY.  He says,

“The economics of time are changing. I don’t think we need a new generation of economists who study time. I think we just need a bunch of people who come to their senses. Coming to our senses would be something like this: recognizing that we have a choice. We need the gumption to slow down with a portion of our lives and do what we know we need to do.”

One of the best bits of advice about it all comes from science writer Stefan Klein, in his book, THE SECRET PULSE OF TIME:  Making Sense of Life’s Scarcest Commodity.  Klein says, “We can stop seeing calendar dates and times as a corset we have to squeeze into and consider them simply resources for organizing our lives within the larger community.”

I tend to agree.  The one-size-fits-all model of time doesn’t make sense.  Each person has their own natural rhythm and their own sense of inner time.

Whenever a bunch of us humans get together, we do need to sort of all move in the same direction in order to accomplish major things together, but it doesn’t necessarily mean that we’ve got to walk in lock-step to somebody else’s drum.

(Myself, I prefer thinking about Mardi Gras, Rose Bowl, and Aloha Festival parades rather than the ones displaying military might — everybody walking in lockstep with heads and eyes all front-and-center.)

As social change-maker and facilitator Shilpa Jain said, when she was the Education and Outreach Coordinator for Other Worlds (a non-profit organization affiliated with the United Nations):

“I think a core aspect of being able to be affluent with our time has to do with having a sense that our time is our own, and our stuff—and our limits around our stuff—is also our own. We can actually get a clear sense of how much I need, how much you need, and what is it we really can share together, and how we can pool our resources to be able to live the life we want.”

That one makes sense to me.

This YouTube video, “Life Is Ticking Away – Time to Smile” featuring Sadhguru was published in 2016.  It sure does make me smile.  Enjoy!

I have mine to do.

I’m not doing it and

It gets me riled at me.

I refuse to be

In someone else’s clockworks.

I want to make mine.

I want to be

That invite and entice,

Casting out lures to the Creative,

Shining up the place.

Let go of struggle, of strife.

In a pile all over the floor.

It needs to be sorted out.

It needs to be worked and re-worked.

It needs to be dreamed on and refined.

I am called to play.

I am called to help other people play.

That doesn’t seem so hard….

I keep getting side-tracked.

I keep getting distracted.

They tug at me,

Pulling me away from mine.

Mine only whispers at me.

The moans and groans,

Begging to be unraveled and resolved

Pull me away from mine,

Drown out the whispers.

It’s a different kind of play, that,

Playing with other people.

But, mine is languishing,

Piled up, all aglay, in heaps,

Begging for me to hear.

You have to give up the good

In order to reach for the better.

So here I sit,

Looking at the stacks

Of mine still piled up

In the corners of my life.

I wonder if there’s a 12-step program for this stuff….

Maybe I need to de-clutter or something?

28 thoughts on “GET TIME-RICH”