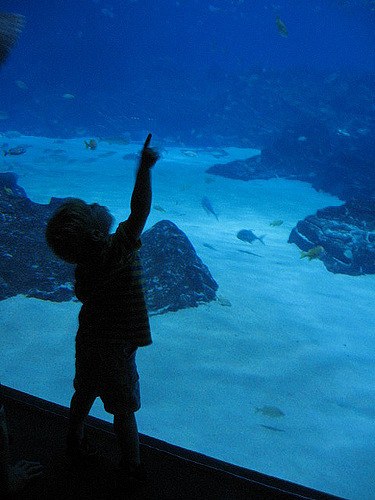 I had a friend who won my admiration because his constant go-to request was always this:  “Can I ask a stupid question?“ Then he’d ask a question that was A-B-C simple about something I thought I knew.

I’d answer the question (out of my own great wisdom, of course).  It made me feel so good to be able to be…uh-hem…The Expert.

My friend Les listened carefully.  He’d think on what I said.  Then he’d ask more “stupid” questions, helping me explore where my thoughts might lead.

One thought would lead to the next and then the next.

He’d interject his own insights, showing me that he was listening and appreciating what I had to say.

In the discussion that would inevitably follow, with me expounding and him asking more and more questions, a light would start to dawn.  Often, I’d reach the limits of my understanding fairly quickly, and still he had more questions.

That’s when the real fun began.

Because he brought a little-kid wonder to the exchange and he’d jump in with his own thoughts on the thing, new ideas would start popping up.  Often they were things I’d never considered.

Les would start grinning wide and bring up another question.  He’d get all sparkly and go with the flow of the conversation, interjecting “yes-and” thoughts, building on the mind-construct I would make.

Les had a lot of fun running with ideas.  (I guess nobody ever told him that ideas are like scissors and it can be dangerous to run with them.   Nobody told him that the ideas can cut you if you’re not careful.)

Our discussions got quite lively.  They really were a lot of fun.

At the end of all our talk-story, we’d hug each other, hugely satisfied by our game, and go along on our merry ways.

And my take-away, always, was another way of seeing the world and more ideas for explorations and moves to try.

I don’t know what he got out of these talks we had, but it sure was a lot of fun.

A MASTER IS ALWAYS AN AMATEUR IN DISGUISE

We are always being told that being a “master” is the pinnacle of our journeys toward Achievement and $ucce$$.  It’s the end-all, be-all of the whole thing, they say.

In this YouTube video, “Sarah Lewis:  Be a Deliberate Amateur,” which was published by the National Association of Independent Schools in 2015, art historian Sarah Lewis tells us that part of the process of developing Mastery is knowing how to fall back into an I-Don’t-Know state of mind and ask “stupid questions.”

Lewis is an Assistant Professor of History of Art and Architecture and African and African American Studies at Harvard University.  She is also the author of the LA Times bestseller book, THE RISE:  Creativity, the Gift of Failure, and the Search for Mastery.

Her book explores the question of how new ideas happen and is a lively and interesting read that has won widespread praise.  It mashes history, biography and psychological research together and explores the value of what the wise guys call “Beginner-Mind”.  In it, Lewis points out the value of retaining that natural sense of wonder you carried around as a child.

The following YouTube video is a part of a series published by Mindfulnessgruppen, a Stockholm-based company offering courses and trainings based on mindfulness.  It features mindfulness researcher Jon Kabat-Zinn exploring the benefits of Beginner Mind, one of what he calls “the nine attitudes of mindfulness.”

Kabat-Zinn’s life-work has been explorations of the mind-body connection and how mindfulness helps promote health and well-being.   He’s been credited with bringing the once-obscure concept of Mindfulness into mainstream thought, it says here.

After Kabat-Zinn, Mindfulness was no longer just the province of wrinkled, half-naked, bearded old men sitting in caves all blissed-out.

The man has written numerous ground-breaking books in the field, and is Professor of Medicine Emeritus and the creator of the Stress Reduction Clinic and the Center for Mindfulness in Medicine, Health Care, and Society at the University of Massachusetts Medical School.

As a result of his studies, testing and developing assorted practical applications for his discoveries, Kabat-Zinn figured out a way for people to use mindfulness to help reduce stress.  He and his crew teach other people how to do his MBSR (Mindfulness-Based Stress Reduction).

The whole thing is a further iteration of old wisdom that’s been made new and relevant to our own world now.

THE WONDER OF IT ALL

In order to explore ideas to their fullest extent (or at least as far as your own mind can take them), it’s clear that you need to get back to Beginner-Mind.  That is the start of it all, it seems.

The very best thing about the Beginner-Mind mindset is the sense of wonder that is a part of our birthright as humans.  We can wonder.  We can think.  We can dream.

This 2020 YouTube video, “The Deepest Image of the Universe Ever Taken|Hubble: The Wonders of Space Revealed“, was published  by the BBC in celebration of the 30th anniversary of Hubble’s launch.

It shows one of the deepest optical images of the Universe ever taken.  The mind-boggling aspect of it is that it is also a snapshot of the passage of over 13 billion years of history.  Wo!

My own thought on all of this is that it gets really hard to think small when you figure out that you’re made up of the same stuff as stars and rainbows and butterflies.

Standing on the tippy top

Of a razorback ridge,

Rocking in the wind,

The mist is down there,

And the other mountain tops

Are poking through the cloud-duvet,

The sky’s that “come-and-fly” blue

That pierces your heart

And breaks it open.

And the world’s going to change again.

Wonder what’s going to happen next.

(It’s never what I think, you know…

The world pays no attention to

It just keeps on turning, the World.)

And there’s something new

That’s been there all the time,

Just waiting in the wings for

Its turn to dance.

And there I will be –

My hair all messy from the head-scratching,

Another stupid grin plastered on my face.

29 thoughts on “ASK THE STUPID QUESTION”