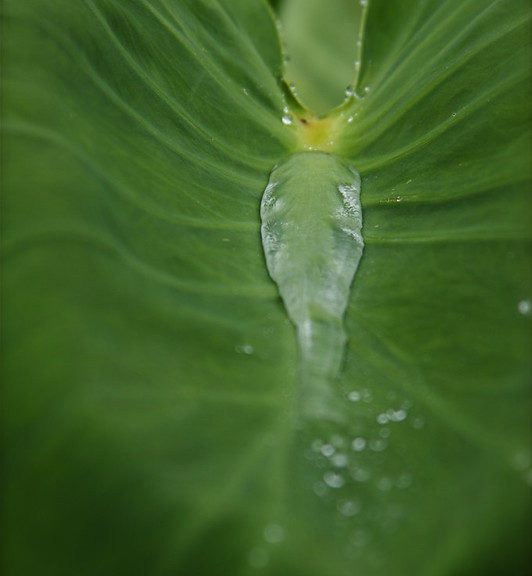 So, I’m sitting there grousing about how dizzy I’m making myself trying to get a handle on the paradoxical concept of “Surrender”.

The Light of My Life does his Mysterious Mystic grin and tells me, “Surrender is the seed of beginning to see that you are the source of your world.  IF YOU ARE FIGHTING AGAINST YOURSELF, YOU LOSE.”

He retells one of my favorite stories, about the time when he was a youngster living in a palapa on the beach for a few months at Playa de los Muertos in Puerto Vallarta before it became a tourist destination.

Every morning he would wade out waist-deep into the surf and pretend that he was a conductor “directing” the waves of an ocean-turned-orchestra.  He spent a lot of time getting his moves right.

I imagine that if someone was on the beach watching him when he got good at predicting how the waves would form and the way they would move, it would look like he was a baby Leonard Bernstein out there playing with the ocean.

It occurred to me then that, in his later life when he became an artist many years after this episode, the skill he developed during his play-time came in handy.

Mat Westcott, the Light of My Life, is an artist/artisan, working in an art-form that he developed himself.  Here’s a lousy snapshot of a work in progress….

He uses natural fibers – in this case, banana “bark” cut away from the trunks of banana trees, then dried and manipulated to make the water and the sky bits of the collage as well as dried stems of ‘ape (elephant ear) to make the land masses and rocks.  Mat’s surfer and sailor fans love his ocean pieces.  They say the things immediately carry them away, back to the sea.

You can see why he talks about building worlds.  It’s what he does in his life.

When I was poem-mining, going through my digitized archives of more than 20 years of poems looking for more poems to feature in this thing, I was struck by the thought that trying to figure out how to “surrender” (and why and when and to what) is a major thread of a theme running through my work.

I have always been an attack-the-problem, full-speed ahead sort of person.  I figure you can’t deal with something if you don’t face it, right?

It won’t go away if you don’t DO something, right?

Most of the time it works.  If I am dogged-y enough, I can usually gnaw the thing down to a nubbin.  Then, it’s one more chomp and GONE.

However, there are times when that one just doesn’t work

So, what do you do when you cannot DO anything any more?  What if you are brain-dead from trying to deal with some irascible, chronic problem that just won’t get smaller and won’t go away? Some of my Dude and Dudette friends say, “Chill out, babe.  It’s all good.”

Their idea of “letting go” is something along the line of that “52-Pickup” prank of our youth.  You throw a deck of cards up in the air and let them fall where they may.

Somebody else has to pick them up.

New-Agers and other Spirit-enthusiasts in all their different flavors say, “Surrender to the Cosmos and/or the Oneness,” or “Let go and let God,” and all that.

And THAT is just plain…SCARY – especially for a recovering Control Freak like me.

Mathew’s take on the whole thing is making a lot of sense to me.

SURRENDER AS A WAY OF SEEING

Surrender can be the first step to making something new.  Surrender can be a way to see underlying patterns of behavior and can serve as a strategy for learning how a situation or a person moves.

Surrender is a different way of seeing.

Those things work for me.

The following video, “Strength in surrender – onstage and in life” was published in 2014 by TEDxTalks and features improv actor John Lewis Lambert giving a speech at the TEDxSanAntonio.

When he gave the talk, Lambert was an active improvisation performer since 2006.  He was the father of twin boys, aged eleven then.

In the video he tells us, “Uncertainty makes us human,” and “Life is improv.”  He tells us that there are times when we have to accept that “Life will not always work out on our behalf.”

He tells us, “All that we have in life can be summed up in two ways:  We have each other and then we have the darkness and insecurity of the Void.”

And the guy is right.

The coolest thing to hear during the times when your nose is pressed up against the hard wall of “not-going-to-happen” is the best assurance that we can give to each other: “I’ve got your back.”

It lets us get on with using Surrender in a way that turns it into a Sun Tzu move — another martial arts technique to add to your repertoire of problem-solving life-hacks as you work your way through whatever problem you are facing.

AND, OF COURSE, THERE’S A BOOK

Cheri Huber is an American meditation teacher in the Sōtō school of the Zen Buddhism tradition.  In 1987 she founded the Zen Monastery Peace Center near Murphys, California where she’s conducted many retreats and workshops.

In 1997 she founded Living Compassion, a nonprofit organization dedicated to peace and service.

Huber has also written more than twenty books.  One of my favorites is her book, WHEN YOU’RE FALLING DIVE:  Acceptance, Freedom and Possibility, which was published in 2003.

To my mind, at least, Huber’s concept of “acceptance” is a close match to Mathew’s concept of “surrender”.  She says that acceptance means embracing, owning and expanding beyond one’s closely held and defended personal limitations.

She says the attitude to adopt when taking this stance is one of, “If it exists in my world, it is mine.”

That, too, resonates with Mathew’s own thoughts.  If all the world you see is yours, then when you fight against what-is, you are fighting your own self.  Hmmm….

If you can move into the present with the willingness to see and embrace everything that arises, Huber tells us, you can figure out how to make the changes that you want and need to make.  You can figure out how to move to match the way the flow is going.  If things are not as you would like them to be, then allowing them to be what they are means you let go of resisting what-is.

And that, she says, is the first step to changing things.

“When you let go of resisting your world,” Huber assures you, “you no longer suffer.”

All the tensions and stresses fall away.  The anger and the frustration evaporates.  You are no longer in panic mode.  And you can see again.

“It’s not that we gain the power to change circumstances,” Huber admonishes.  “We develop the skills to determine our experiences of those circumstances.”

And there it is, yet again.

[Note to Control-Freak Me:  What happens to you is not what matters; you cannot control that.  What you CAN control are your responses to whatever happens.]

GRATITUDE AND A GIFT

Thanks for putting up with my spazzing.

As a special treat, I’d like to share this YouTube video, “The Paradox of Awakening,” published by SAND (Science and Nonduality) from their 2018 conference.  Thousands of people from around the world have attended these annual conferences that bring together scientists, mystics and seekers.

In the video, best-selling author, international speaker and life coach David Ellzey gives a (non-verbal) performance that pretty much delineates what life is like for a Seeker.  It has its funny moments.

The way is easy, they tell me,

But there’s a lot they do not say:

How easy is mostly an empty feeling

That will sit inside of you and stay.

You see a thing and you start walking.

A small, small boat in a very big flow.

There is no need to rush-rush-rush

And nothing you have to do.

There’s nothing here to push you,

Just the nothing inside of you…

And the nothing is hard to grasp sometimes.

It is bigger than you can hold.

And to wait for the how to ripen

Can mean shivering in the cold.

Easy can be hard to take

When you don’t know how.

‘Cause easy is only now.