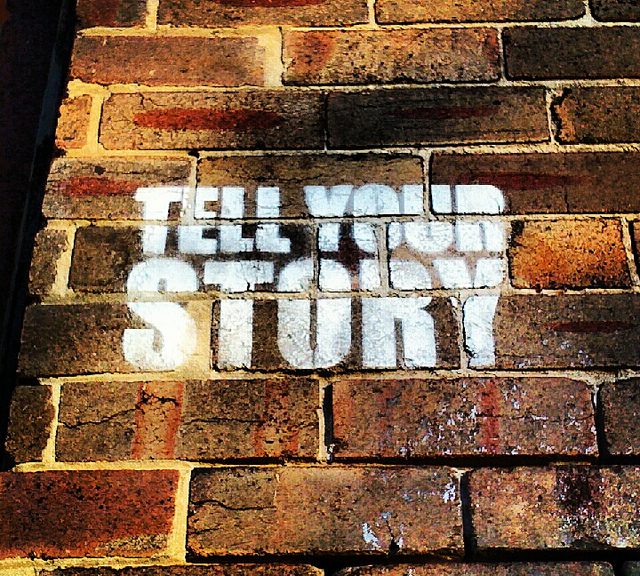 When I Googled “tell your story,” I got 166 million search results.  It seems the world is hungry for stories…your story.  Ears are everywhere, waiting to hear, it seems.

Every kind of organization – for-profit and not, religious and not, beneficial and (perhaps) not — are listed in the search.

Telling your story is generally agreed to be a good thing.

Sometimes telling your story helps to ground you and helps to start your healing.

This YouTube video by spoken-word poet Jon Jorgenson is called “Tell Your Story.”  In it, Jorgenson tells what happened when he opened up before a group of interested, well-intentioned Christians.

Sometimes telling your story becomes an exploration and an uncovering of a passion that sustains you and connects you to the world.

In this 2012 TEDx talk given at the University of Hawaii at Manoa, “Maka Maoli:  Storytelling On a Screen Beyond Stereotypes,” independent filmmaker and hula dancer Lisette Flanary tells how she began creating her award-winning documentary films that celebrate a modern renaissance of the hula and Hawaiian culture.  It helped her to re-connect with her roots.

Sometimes you can use your stories and ideas to make something new that resonates with the world.  In this YouTube video, filmmaker Zach King recounts how he began his YouTube channel FinalCutKing after his application to film school was rejected.

He posted video editing tutorials on the thing and more than 400,000 subscribers tuned in to his channel.  Even after he was accepted into film school, King continued playing and exploring his video-making habits.

In 2013 King launched a Vine account that attracted an audience of nearly a million fans in a remarkably short time.

King points out that he did all this with just a computer and a digital camera, assorted everyday props (including pets and stray people) as well as a cadre of computer geek collaborator-friends.

While he had to give up his fantasy of directing a major blockbuster and collaborating with Steven Spielberg, he was also able to bypass the estimated twelve-plus years of industrial dues-paying and the incessant fundraising that’s an inevitable part of producing “real” films.

In this YouTube video of a TEDxPortland talk, The Storyteller In All of Us, he tells his tale.

He does look like he’s having a good time….

My own favorite share-a-story place is The Moth, an organization whose mission is “to promote the art and craft of storytelling and to honor and celebrate the diversity and commonality of human experience.”

Each Moth show is built around a theme, some aspect of the human experience.  Every Moth storyteller tells a true story live, in front of standing-room-only crowds with no notes.

Since its inception in 1997, the group has become international.  In more than 25 cities around the world, The Moth currently produces more than 500 live shows each year.  Through their Education and Community outreach programs they conduct workshops to teach high school kids and adults how to tell their stories.

The Moth podcasts are downloaded over 30 million times a year and each week the Moth Radio Hour is heard on 400 radio stations worldwide.  This radio show won the Peabody Award which recognizes when the telling of “stories that matter” is done well in electronic media.

The Moth’s first book, THE MOTH:  50 True Stories was a New York Times bestseller in 2013.  There are others as well.

NOT READY TO TALK?

What if you’re not really ready to tell your own story?  What if it disturbs your sense of privacy?

Well, there’s always listening to the stories all of these other people are telling theirs.  That’s a lot of fun too and, as a bonus, you might even learn something….

COME TELL ME YOUR STORY

Come tell me your story.

I promise you:  I WILL listen.

I will listen for

I will listen through

the heated flames of anger,

the coldest wind of bitterest gall,

the piquant and the sour words

falling from your mouth,

the salt of an alkali desert

pouring from your lips.

I will listen for the sweetness,

the soft notes of redemption

from the shining songbird that settles

in that gnarly old tree

growing in the wasteland of you.

I will listen until

you can hear your own story,

until you know you will endure,

Your story is very much

Thank you for sharing

Picture credit:  Tell Your Story stencil by Acid Midget via Flickr [CC BY 2.0]