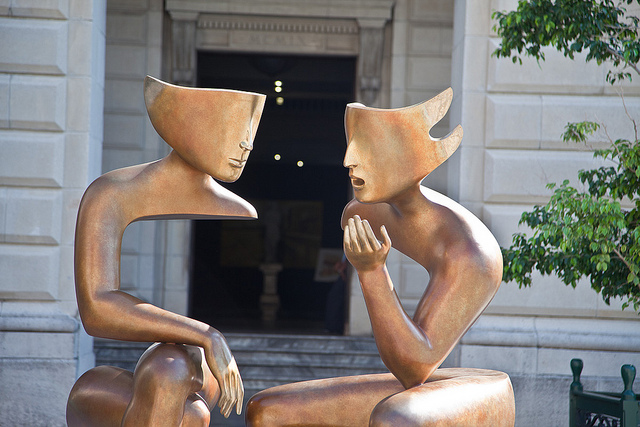 This YouTube video, “Why You Should Talk to Strangers,” features Robbie Stokes, Jr. giving a TEDxFSU talk at the Florida State University.   It was published in 2013.

In it, Stokes, a former Washington, DC events coordinator for a congressional delegate to the United States House of Representatives, tells how, the year before, he quit his job, sold all of his stuff and chased his dream about wandering around the world and talking to strangers.

Over the course of 110 days, he traveled the world, visiting 17 countries.  He spent his time talking to strangers.  Here’s what he learned….

Somewhere in there, Stokes also created the I TALK TO STRANGERS Foundation with a bunch of help from his friends.  They call themselves a “social movement whose philosophy encourages and challenges individuals to create genuine relationships through meeting new people.”

The Foundation’s “initiatives,” – an impressive array of projects, programs and events organized in North America, Africa and Southeast Asia is detailed in the 2012 – 2017 Foundation Report.

I grew up in a miniscule place.  Molokai is the fifth largest island in the Hawaiian island chain.  It measures a mere 38 miles the long way and 10 miles across at its widest point.

A lot of the island is empty.  The people cluster in a few communities scattered here and there on the island.

When I was growing up, the population of the entire island stood at around a little over 5,000 folks.  Wikipedia says a “town” has anywhere from 1,000 to 20,000 people.  Back then, according to this, the whole island of Molokai would have qualified as a small, very rural town.

For me, there were no “strangers,” only cousins and aunties and uncles I hadn’t met yet.  Even the grown-ups who weren’t officially related to me were “aunty” and “uncle.”  It was good manners and proper to notice people and to greet them and to “talk story.”

It was only later, when I got off that little rock, that I encountered the rule about not talking to strangers.

I got into all kinds of trouble for acting polite. (“What do you mean, I can’t talk to that guy on the street corner?  We see him every day.  He’s really nice, you know….)

I never did get the “don’t talk to strangers” thing right.  Maybe that was a good thing.

TALKING TO STRANGERS CAN BE GOOD FOR YOU

According to the smarty-pants who study such things, just noticing the folks around you and being noticed is a good thing.  (They can’t “prove” that yet, but there are strong indications, they say.)

In 2014, a study published by psychologists at the University of Michigan was one of the first to look specifically at neighborhood social cohesion and heart attacks (a fact of life for more than 700,000 Americans every year, it says here).

The study looked at all kinds of factors and the neighbor connection was just one correlation, but as researcher Eric Kim suggested, being friendly with neighbors has some pretty obvious benefits.

Neighbors who know each other tend to check in on one another.  They talk story and share health-related information.  They tend to watch out for each other.  Often friendly neighbors share resources as a matter of course. More importantly, the casual hand-wave and friendly “Hi, how are you?” adds up to a feeling that somebody sees you and acknowledges that you are there.  Just the feeling that somebody’s got your back is worth the effort to be friendly, if you can.

Other studies since then have shown that people who talk to the other people around them rather than staying inside their own little bubble when they travel on public transportation or zoning out in a checkout line or hiding behind a book at a table for one, report that they enjoy their daily commutes, doing non-recreational shopping, and feeding their faces more.

The everyday nitnoy annoyances get less stressful when you’re all in it together, it seems.  If you can include and engage with familiar strangers (like the guy working the cash register, the barista serving up your fancy coffee fix, or even the person you see on the bus every day), there’s a warm fuzzy feeling that trails around after you all day long.

CAN TALKING TO STRANGERS MAKE YOU SMARTER?

Not only that, but all kinds of studies have shown that talking to strangers might even make you smarter.  It’s all based on a thing called the “confirmation bias.”

Every one of us tends to think the same thoughts over and over again.  We look for evidence that our thinking is “right.”

We also tend to hang with people who think the way we think, act the way we act, and so on.  It’s comfortable.  You don’t even have to go into spasms about it.

Strangers, on other hand, “think different.”  Often, that makes them annoying obstructions and challenges that you just want to ignore because they take you out of that comfortable space.

Sometimes, however, their different way of thinking may be just what you need to help you get past your own blind spots when you’re wrestling with a complex problem.  Sometimes strangers can present some other way of looking at a thing that helps you move forward on some project.

You do the same for them.  It isn’t a one-way street.

It could help you to think of strangers as exotic resources you can tap.  What do they see?  Why is it so different from your way of seeing?  Is there something in there that you can use?  Hmmm….

This could lead to exploratory journeys into parallel universes, you know.

WHAT IF YOU DON’T KNOW HOW?

I have figured out, though, that a lot of people really do have a hard time just talking to people who are different.

Take a look at this YouTube video posted by The Atlantic magazine in 2016.  It is an episode of its If Our Bodies Could Talk series.

The video was shot in Brooklyn’s Prospect Park.

The fact that talking to strangers is a skill is an important concept.  A skill can be learned.

It does take a bunch of practice stepping outside your comfort zone.  It also requires a certain recognition of other people’s boundaries as well as an acknowledgement of your own …..

Sure it looks funny at first.  You do get better at it.

Okay.   Now for an important message from your Inner Smarty-Pants….

First of all, if you’re going to get outside your comfort zone, you still have to pay attention to what your body, your head and your heart is telling you.  If a person or a situation gives you the shivers, do not, not, NOT ignore those feelings in the name of “open-mindedness.”

Whatever else, fear is always real.  You are feeling it and it is giving you a very important message.  Your fear is your early-warning-system and it deserves your attention.

Get out of there and then when you can breathe again, check in with yourself and try to figure out what set off the alarms.  Was it something tangible, something that makes your backing away a sensible move?

If so, thank your fear and get on with your life.  If not, then take the fearful reaction as a signal that you need to slow down and take smaller steps towards your goal of being more open to experience.

Just ‘cause you’re trying to be more open-minded does not mean you want your brains to fall out nor do you want to fall into a vortex of new experiences that confuse you so much you can’t even think straight.

Keep practicing as you can.  It’ll get you accustomed to testing and challenging yourself .  It will also re-set your fear monitor.

Of course, as with all these types of things, it’s always important to remember boundaries.

If you’re lucky, you might find someone else interested in sparking up a random little conversation as well.

people with the same loves

even if we’ve never met.

our worlds dance to rhythms

that mesh and climb, overflowing

into other spaces, other times

that we recognize when

we finally, at the last,

touch each other with our minds,

a hall of mirrors, each to each,

refracting and expanding into many,

20 thoughts on “TALK TO STRANGERS”