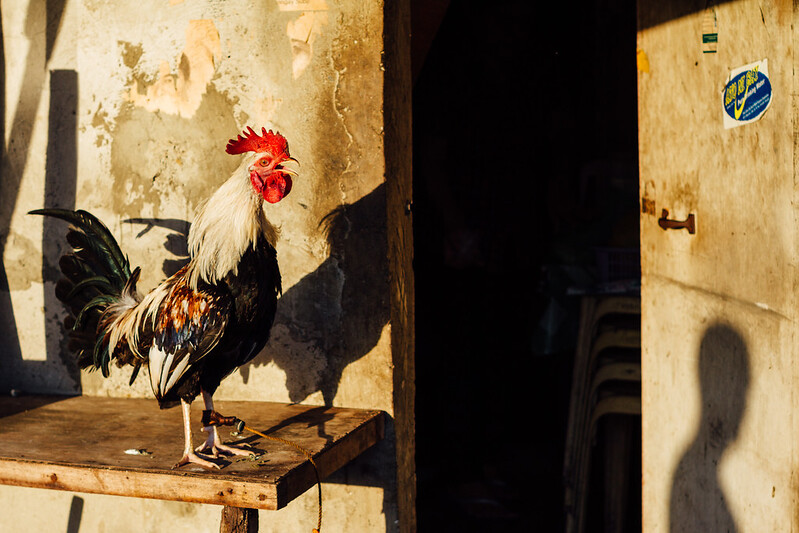 Very often it is the little things that make a big difference in lives that are lived on the edge.

In poorer parts of a city, where people’s homes often do not have access to reliable electrical service and where windows that let in light might be a bad idea in terms of home security, people either spend a lot of time outside their unlighted homes or use open fires, candles or oil lamps as light sources.  These can be problematic.

In 2002, Alfredo Moser, a Brazilian mechanic, had a literal “light-bulb moment.”  He lived in the city Uberaba in southern Brazil where frequent electricity blackouts were a fact of life.  The only places that had access to fairly reliable energy were the factories and not the homes of the people living around them.

At the time Moser and his friends were noodling around with ideas for how they might be able to raise an alarm in case of an emergency if something catastrophic happened in their neighborhood.

One suggestion was filling a discarded plastic bottle with water and using it as a lens to focus the sun’s rays on dry grass to start a fire as a signal to rescuers.

That one didn’t quite work, but Moser kept playing around with the idea, filling up two-liter plastic bottles and making circles of refracted light, big and small.  His greatest innovation was developing a metal collar that fit around the bottle and held it in place in a hole cut in the roof of a structure.

Moser installed the resulting bottle lamps he developed onto the roof of his house.  Light from the sun illuminated the house during the day without electricity, using nothing more than plastic bottles filled with water and a tiny bit of bleach plus some epoxy as sealant.

Neighbors and friends noticed how well the little lamps worked and asked him to install the bulbs in their homes.  He was even asked to install them in the local supermarket.  He did. He also taught others how to make the things as well.

Moser earned a few dollars along the way installing the things, but his open-source idea did not make him rich.

However, it did give him a sense of satisfaction that he had made a real difference in the lives of his neighbors and friends and many other people besides.

In a 2013 interview for the BBC, Moser said, “It’s a divine light.  God gave the sun to everyone, and the light is for everyone.  Whoever wants it saves money.  You can’t get an electric shock from it, and it doesn’t cost a penny.”

He tells a story about one man who installed the lights in his home.  Within a month the man had saved enough to pay for the essential things for his soon-to-be-born child.  “Can you imagine?” Moser asks the interviewer.

THE LITTLE LIGHT THAT COULD

Several years later, as the light gained in popularity among sustainable lifestyle activists who work at trying to improve the lives of the metro poor, an engineer measured the light output of the bulbs and found that on a clear day the lamps gave out a refractive light of 40 to 60 watts.

The following Vimeo video, “How to Make a Liter of Light” was uploaded by UP Junior Marketing Association, a university-wide student organization based in the Cesar E. A. Virata School of Business, University of the Philippines, Diliman.

CONNECTING THE POINTS OF LIGHT

It took another man, Filipino social entrepreneur Illac Angelo Diaz, the director of MyShelter Foundation, to take the simple lightbulb idea around the world.  He knew how to make connections.

In 2011, MyShelter was working on creating houses in the slums of Manila using sustainable recycled materials like bamboo, tires, paper and a lot of plastic bottles.

At the time, the MyShelter workers were filling the massive pile of donated bottles with mud to create walls for makeshift houses.  They also filled other bottles with water to make windows.  When Diaz learned about the Moser lamps, he adopted them and he ran with the idea.

The initiative that grew out of the Brazilian inventor-mechanic’s simple idea became the “A Liter of Light” project.

One lightbulb installation in a Manila slum shack led to more and more.  The organization began training people to create and install the Moser lightbulbs.  The installers could earn a small income while helping their neighbors to the light.

Other people came along and figured out how to add a little solar-powered LED light built out of recycled electronic parts to the design.  Students at MIT and Harvard University got involved and helped to make that happen.

The day-time light gained the capability of lighting up the night as well.  Streetlights as well as solar-powered lightbulbs that glowed into the night became a possibility for poorer neighborhoods.

The following Vimeo video, “Manila – Liter of Light” was shot in Manila for Al Jazeera  (an independent news organization in the Middle East), and features Diaz talking about the project.  It was uploaded by peteconnor.

The simple idea spread from metropolitan areas into the countryside.  Living conditions improved.  New economic enterprises were born in the wake of the coming of the lightbulb.

Areas where the regular network is faulty or where being connected to the grid is simply too expensive were naturals for involvement in the project.

Diaz and Liter of Light formed partnerships and collaborative efforts with other organizations around the world and inspired many more initiatives to bring light into the dark places.

WOWING THE WORLD, MAKING A DIFFERENCE

In 2012, Diaz commissioned South African designer Stephen Lamb, the founder of Touching the Earth Lightly and an icon in the South African sustainable development industry, to design the Liter of Light’s pavilion at the Shanghai Biennale.

Together with artist Andrew Lord, Lamb created the first-ever mushroom farm grown in bamboo containers using locally sourced bamboo logs that were split open, filled with mycelium, and then drilled back together.

The elegant design used an array of rooftop solar bulbs for lighting up a warehouse-like corrugated metal structure hung with the bamboo mushroom planters.  A timed mister kept the environment moist.

Another project resulting from the collaboration between the Liter of Light Foundation and Touching The Earth Lightly as well as Greencube Nursery combined the Moser lightbulb idea with the concept of “green-blocking,” installing vertical food garden walls on shacks in Cape Town, Africa as a fire-preventative as well as a food resource.

Here is a Vimeo film clip of an award-winning documentary featuring that initiative:

One 2018 collaboration that captured the world’s imagination was the 100-day “Voyage of Light” undertaken as a partnership between Liter of Light and the Peace Boat.  The Peace Boat is a Japanese-based international non-governmental and non-profit organization that works to promote peace, human rights, equal and sustainable development and respect for the environment.

The voyage, which stopped at 19 ports around Asia, Africa and South America, is still a major feature of the Liter of Light’s website.  (Click on the button below for a glimpse of it and to access the site.)

There were many other connections and collaborations made over the years that kept the idea spreading.  Wikipedia lists over 20 countries where projects inspired by Diaz’s Liter of Light are in place and are continuing to grow.

POWER OF THE SMALL

I am noticing the power of small things,

The tiny little bits that overturn

The huge, the loud, the strong, the dark

And gently, gently calls us back to the quiet

At the center of the turning.

In the right place,

At the right time,

One little word can open up a heart,

One small smile can heal a painful rift,

A tiny giggle from a friend can brighten up alone,

One gentle touch can bring a soul back to itself,

And the striking of one little match pushes back the engulfing dark.

At the right time,

In the right place.

It’s said that the light is born

Knowing that it rules the universe.

The stars that twinkle in the deepest dark

Of the vastness of the void

Remind us of that one.

Have you ever noticed

Just how many stars there are?

8 thoughts on “LET THERE BE LIGHT (The Power of Small)”