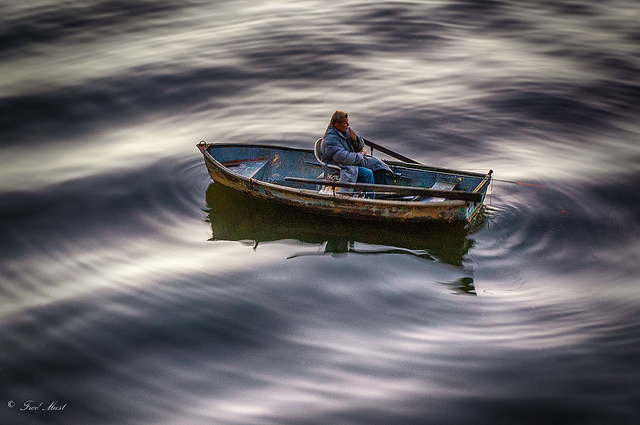 This poem was written by the Light of My Life, Mat Westcott, when we were just beginning to reach out to each other.  He sent it along with a note that said, “This was a dream I had not long ago, a hard one to forget.  Thought you’d enjoy it.“

The man has a penchant and a love for lucid dreaming and for the Dream-time.  One time, when the tribe got together to celebrate a milestone birthday with him, Mat asked everybody, friends and extended family, to sing his favorite song.  We all agreed, of course, and he started it:  “Row, row, row your boat, gently down the stream….”

We ended up doing it in roundelay.  There were a lot of giggles because everybody knew that it really was his favorite song.

LIFE IS BUT A DREAM

The party was going full blast and friends of many years were all sharing mutual affections.

Suddenly the room was filled with a strange amber-colored light that became viscous to the touch.

Confusion became paramount and we all started to seek a way out of what had become personal bubbles of separation.

We left the house, each in our own direction in absolute confusion and dismay.

I wandered through back yards, laundry lines and over fences, feeling as though all around me was a separate world I couldn’t touch.

I was moving a quarter of my regular speed and all else was moving normally.

Sometimes I crawled, trying to escape my separation from the world.

A group of young men came along the sidewalk and, seeing me in my condition, decided to take advantage of my helplessness.

They searched me for valuables and beat me a bit but got bored and moved away.

I crawled up the sidewalk looking for sanctuary.

I entered a wooded neighborhood of better homes and saw two people approaching on the other side of the street.

A woman was leading a man by the arm.

I wanted desperately to talk to them and forced my slow-motion body to cross the street and approach them.

I confronted the woman and she told me not to bother the man because he was completely at peace, but I insisted.

When he turned and looked up, I was looking into my own face.

My objective-subjective relationship with the universe was totally destroyed in that instant.

The world became a crust made completely of human illusions about thirty feet thick.

I saw a cut-away as a piece fell into nothing.

It was made of art and garbage, buildings, dreams and all things human.

It all began to crack and fall away.

Into the empty my world fell,

One giant piece after another until there was nothing but the empty that is full.

I dissipated and all became the warm consciousness of being…

Please note:  If any of you would like to contribute a poem to this page, please let me know by leaving a comment below….  I’d be happy to hear from you.