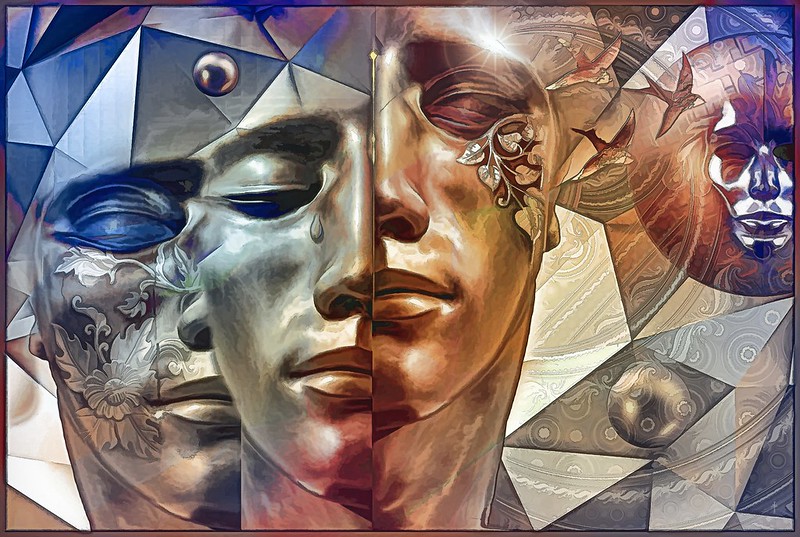 I bet you’ve heard it more than a time or two, from moms, dads, assorted other relatives, besties, advisers and counselors of all sorts.

“Be yourself,” we’re urged, and the person telling us this stuff usually has a kind of self-righteous look on their face, as if they’ve imparted some grand wisdom saying or other.

You’ve probably even given out this specious piece of advice your own self – usually to someone who has been plucking at the one single nerve you’ve got left, after you’ve been all empathetic and compassionate and caring in the face of all of their self-doubts and whining and moaning about how unsure they are about getting on with walking through some social situation or other that is new to them.

You’ve already run through every good and practical suggestion you could think of, been subjected to every “yes-but” under the sun, and listened (yet again) to the same interminable loop-de-loop until the words run all together and you just can’t help yourself.

It sounds so simple, that advice.  Too bad it’s not.

YOU’VE GOT MORE THAN ONE SELF, YA KNOW….

The problem is you’ve actually got more than one “self.”  All the ancient wise guys and the guys and gals in the white lab coats have told us this or something similar as they slice and dice the human psyche six ways from Sunday.

I just ran across a TEDxTalk published in 2013 that features Caroline McHugh, the founder and CEO of IDology.  It seems to be her one contribution to the Internet world.  (I figure she’s too busy getting on with her real work of helping other people figure out how to manage and develop themselves better.)

It’s a bit long – 26+ minutes – and is the best free-ranging, spot-on exploration of the concept of Self (or rather, Selves) that I’ve ever heard by a witty, warm woman who, with her team, has spent more than a couple of decades now helping business leaders and organizations from Mastercard to MTV to “embrace the idea of being original versions of themselves.”

In the YouTube video, McHugh introduces us to the different parts of us.

In between all the Self-dicing, McHugh gives a bunch of hacks and tips about how to handle and manage all of your own different selves.  It’s an eye-opener.

You can click on the button below to watch the TEDxTalk by McHugh.

AND THEN THERE’S THE MAD POET

Edward Estin Cummings (1894 – 1962), often styled as “e e cummings,” in many of his published works, was considered by his contemporaries to be an American master of avant-garde experimental poetry.  He was also a painter, essayist, author and a playwright.

The man wrote an estimated 2,900 poems, among other things, many of them surprisingly popular with regular folks even though they were not traditional poems by any means.

Cummings’ experiments with poetic form and language, juggling syntax, grammar and diction, and even coining words when the regular ones couldn’t do the job he wanted them to do, made his work dance and soar and sing.

I fell in love with the guy right away, back in the day when I was a teenager and susceptible to crushes.

His themes were traditional, and perhaps even somewhat passé.  He explored love and childhood and flowers.  He revisited the ordinary, the clichéd, and the goopy stuff, making them somehow extraordinary, reveling in the joy, growth, and transcendence that he felt was a large part of being human.

He also spent a lot of time attacking mass mind, conventional patterns of thought, and society’s restrictions and limitations on free expression.  Group conformity, herd mentality, and commercialism were favorite targets of his derision.

Starting in 1952, Harvard University asked Cummings to deliver the Charles Eliot Norton Lectures at the university.  It was a way to honor one of their famous alumni.

After he’d delivered six, very personal “nonlectures” over a two-year period, Cummings published them in a book, I: SIX NONLECTURES, that was probably his only formal attempt at an artistic autobiography.

I have to confess that the guy has had a great influence on me.  In my younger days, my guiding star was a quote of his:

“To be nobody but yourself in a world which is doing its best night and day to make you everybody else means to fight the hardest battle which any human being can fight and never stop fighting.”

That one became my own “Good Fight,” the one that overrode all of the others for me through the years.  Those words spoke to me at a young age and they gave me what became the foundation for my own search for the meaning I wanted to make with my life.

I was pleased to find the words again on this YouTube video, “A Poet’s Advice to Students,” (1955), which is a part of the collected readings by the poet included on a two-vinyl LP by Caedmon Records, “E. E. Cummings Reads His Collected Poetry 1920 – 1940 and Prose,” that is a part of the online DisCogs collection.  The video was uploaded to YouTube in 2018 by Franklin Alexander.

In the video, cummings also shares his thoughts on how and why someone might even want to become a poet.  He is not particularly encouraging about the whole enterprise.

My own thought on all of this is that self-awareness is a lot more complicated than you’d think.  No wonder the assorted explanations from all the wise guys and smarty pants in the world who look at these explorations of Self then hand out advice of one sort or another tend to get us ordinary sorts all tangled up and confused.

It seems to me that in order to “KNOW” your own self, it might be a good idea to spend a bunch of time WITH yourself, looking at what you do and thinking and feeling things through, trying to make your kind of sense of it all. Once you’ve got that (sort of) down, you can get on with being the best you there ever was.

I figure that last part is probably easier.  After all, us humans are just like snowflakes.  No two of us are alike, but (unlike snowflakes) we can make it all up as we go along.

And isn’t that a cool thing?

AUNTY LAYS IT OUT FOR BABY GIRL

Did you get that, Baby Girl?

Jump into the dragon’s mouth and you will get bitten

(Comes with a lifetime guarantee).

Don’t jump and you stand on pointed toe,

Twirling ’round and ’round,

Smiling through the pain…nothing gets YOU down!

Or you can have gorgeous hair,

Tap dance on the monster’s tongue

Or get all dizzy ’til the music box spring gets sprung.

Is there, maybe, some OTHER choice?

2 thoughts on “WHICH SELF? (Another Un-Seeing Exercise)”