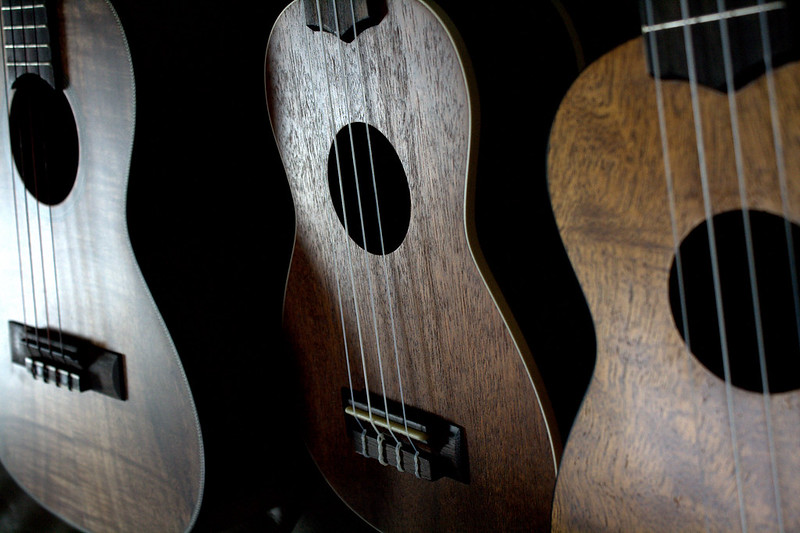 It was at a festival celebrating taro and community in Hana that I saw another one of them — an intense, prepubescent boy who carried an ukulele around wherever he went.

I noticed him sitting on the grass very close to the front of the low-built stage under a big canvas tent.  He sat there, soaking in the presence of a musician who was making a name for himself in the big city of Honolulu and beyond and doing his town proud.

The boy was absolutely focused, strumming his old, well-used ukulele, frowning in concentration as he tried to match his hero’s fingerings and licks.  He was rapt in the music and transported to a world that was only sound and touch and heart.

His quick darting eyes soaked in the older musician’s hand and finger movements as the boy tried to make his hands and fingers move like that, as he tried to duplicate what he was hearing.

Later, after the musician’s set was done, I saw the boy leaning with his back against a tree, fiddling with the tuning pegs of his instrument, strumming and playing by himself as his aunties and uncles and cousins and neighbors did festival things and the rest of the world swirled all around him.

When they looked at him, the old ones smiled.  A while later I saw his cousins and friends gathered ‘round to hear him play.  Some of them had their own instruments as well.

It is not an uncommon sight, that.  There are these young ones among us who can travel to other realms, transported there by the mellow sounds produced by the small four-stringed instrument with a two-octave range of notes, an instrument that is uniquely tied to our islands.

Mostly, these young ones grow up and life takes them away from their other-worldly travels.  Sometimes, though, they get to stay in the magic and the music makes their life.

Ukulele virtuoso Jake Shimabukuro says he has two passions:  his ukulele and his family.

It was his passion for the ukulele (with a boost from the then-baby YouTube) that opened doors like magic into the wide, wide world.

It is his passion for his family and connection that brings him home.

For Jake the music he made on the cherished Kamaka ukulele that was his mother’s before it became his was his sanctuary and go-to happy place in a world that kept changing around his younger brother Bruce and him after their parent’s divorce.

He and assorted friends put together ensembles and entered local talent contests like the “Brown Bags to Stardom” in high school.

With two of his friends – Lopaka Colon (percussion) and Jon Yamasato (vocals and guitar) – he formed a local band, Pure Heart, just out of high school, and by 1998 they were already making a name for themselves.

At the time, the musician’s day job was being a salesman at a local music store.  The music thing was a side-gig.

The band’s first of two albums won four Na Hoku Hanohano awards, the Hawaiian counterpart of the Grammy Awards presented by the Hawaii Academy of Recording Arts.  That album was named as one of the “top fifty Hawaiian albums of all time” by Honolulu Magazine.

By 2006 Shimabukuro was a multiple-award-winning, local up-and-coming musician whose blossoming solo career had already taken him to Japan and across the mainland United States.

He was known for his extraordinarily energetic playing style and stage presence as well as his penchant for experimenting with other musical genres than the traditional Hawaiian and local-style stylings of other ukulele players of the time.

In his work Shimabukuro was already making a run at trying to transcend the inherent limitations imposed on the musician by the instrument’s four strings and two-octave range.

THE VIDEO THAT DID

While he was in New York City, Jake was invited to appear in a local television show, Midnight Ukulele Disco, that featured different ukulele players.   He agreed.

The musician was taken to Central Park where he sat on a rock while a little handheld video camera was trained on him.  After a few questions, he started playing an arrangement of Beatle George Harrison’s “While My Guitar Gently Weeps” that he had been developing.

At the time, YouTube was just beginning to cause a stir on the Internet.  The American video-sharing platform was created by three former Paypal employees – Chad Hurley, Steve Chen and Jawed Karim – and launched in February, 2005.

This YouTube video, “Ukulele Weeps by Jake Shimabukuro” was posted on YouTube in April, 2006.  It may have been one of the first videos to go viral.

Jake knew nothing about it.  He was just sharing his work with another audience.

A few months after the Midnight Ukulele Disco video-shooting, he began receiving emails and calls from friends.  They told him they had seen a video of him on the Internet playing his ukulele in Central Park.

Apparently, someone had posted the video on YouTube and it caught people’s attention.  Eventually over 15 million viewers shared the video one email at a time.  (This was before the days of constant, compulsive sharing.)

The video’s popularity helped fuel Shimabukuro’s ever-widening worldwide net of connection, spawning joint projects and collaborations with other world-class performers and producers of various forms of media (including movies) who he considers his heroes.

He has shared his love for the ukulele in sold-out concert tours and performances at big-name festivals.  He even got to perform for the Queen of England.

Through it all, Shimabukuro has continued to expand and develop his mastery and transcendence of the ukulele.

For a while after the video hit, he experimented with the use of electronic effect pedals.  Eventually he decided to “get back to his fingers”.

On his American Federation of Musician member bio page, Shimabukuro says the guy who inspired him to forego the electronic special effects aids was English guitar-shredder Jeff Beck:  “You don’t hear anybody else get sounds like that out of the guitar, and I thought, ‘Hey, it’s all about the fingers.’”

The AFM page reveals that Shimabukuro doesn’t use a pick.  He files his nails before performances to mimic a pick and he doesn’t use rubber cement or acrylic substances to strengthen them.

(That one reminds me of my uncles, some of whom were pretty good players of stringed instruments their own selves.)

The musician has been the darling of news and magazine story writers and has had many speaking engagements at conferences and radio, television and other media outlets as well as working as the spokesperson and then director of a now-defunct-in-Hawaii nonprofit group, Music Is Good Medicine.

The group used community outreach programs and performance visits by performers to schools, senior centers and hospitals to promote healing as well as encourage a healthy lifestyle with a connection to music.

Jake has been a featured performer in a number of TEDx gatherings.  Every time he has wowed the crowds.

This YouTube video of Shimabukuro’s 2011 performance was a highlight of the day at the TEDxSanDiego.

The video’s interesting for two reasons:  Not only does it provide a glimpse of the performer five years after the viral video of legend, but it also says a little bit about another great passion of the performer – the belief that music (and especially the ukulele) can be used to connect with people and help improve people’s lives.

In 2013 Shimabukuro started the Four Strings Foundation, a nonprofit whose mission is to use the ukulele to expand music education in public schools.

It is an ambitious project, but one that grows out of his own feelings of connection with his ‘ohana (extended family) as well as the culture in which he grew.

One interesting take on how Jake has coped with all the fame and glory that resulted from the viral video and its aftermath comes from an article in American Lifestyle Magazine.

The magazine is a customizable personally branded magazine about American lifestyles that is marketed to professionals and businesses who need ready-made content for social media or direct mailing campaigns.

In the article Jake talks a bit about the Hawaiian island lifestyle and the strong sense of community which he takes seriously.

He says he doesn’t feel a sense of celebrity when he is home in Hawaii.  “That’s the nice thing,” he says.  “It doesn’t matter who you are or what you do – everyone is family.”

He relates how before he started touring, if he struck up a conversation at a bus stop with whoever was sitting nearby, nine times out of ten, he and the other person would realize that they had mutual friends or were ‘ohana (family).

“Hawaii is so small and everyone is so connected,” Shimabukuru said.  “The strong sense of community also compels everyone to be nice to each other.

“My grandma lived on an island called Molokai, and if I did something bad, chances were good the news would get back to my grandma before I got home.  The whole island would know that I’d gotten into trouble.”

AND THEN THERE WAS THE MOVIE

In 2012, a one-hour documentary, “Jake Shimabukuro: Life on Four Strings” about Shimabukuro’s life and career was released.  The director and editor of the film was Tadashi Nakamura, Jake’s mentor and friend.

The film was a production of the Center for Asian American Media and Pacific Islanders in Communications in association with Palikū Documentary Film.

It has won awards at national and international film festivals and was aired nationally on PBS in 2013.  It was released on DVD shortly afterwards.

Takeaways I got from the film include the following:

In a 2013 interview for the National Education Association (NEA) newsletter, Shimabukuro was asked in an email interview:  “What’s your ten-word bio?”

He replied, “I’m an ukulele player from Honolulu, Hawaii.”

Then he was asked, “What’s your version of the artist’s life?”

He said, “I have never thought of myself as an artist.  When you play the ukulele, it’s hard to take yourself too seriously.  I’m just a fan of the instrument – and I love that the ukulele’s popularity is growing day by day.”

And more of that…

To find your hat.

Is this stupid thing

“Will ya quit that spazzing?”

The thrill is here

Of doing and moving

And pulling a dig.

What fun it is

And, once in a while,

28 thoughts on “WHEN MAGIC HAPPENS”