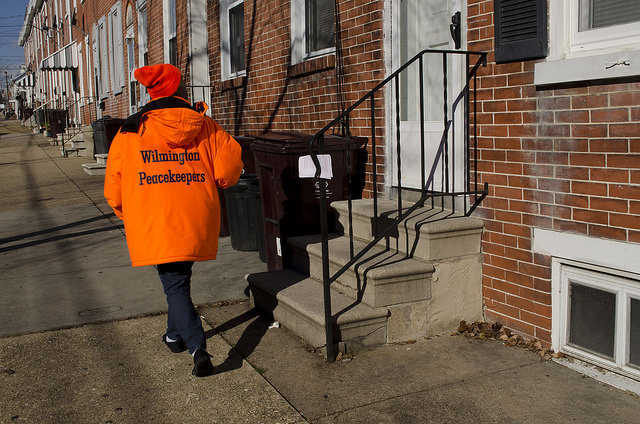 The Twin Poets are identical twin brothers, Nnamdi Chukwuocha (born Elbert Mills)  and Albert Mills, with a unique style of poetry that evolved out of their habit of finishing each other’s sentences and the rap and hip-hop of their youth.

They are internationally known for their live performances of socially conscious work, including “Dreams Are Illegal In the Ghetto” and “Homework for Breakfast.

Their book, OUR WORK, OUR WORDS…:  Taking the Guns From Our Sons’ Hands are filled with poems that tell the stories of the people they’ve encountered in their work as social workers and teachers for more than 17 years in the poorest sections of Wilmington, Delaware.

These poems are definitely “Life-Built Poems” — of the most heartbreaking kind.

The brothers appeared on HBO’s “Def Poetry Jam” series in the mid-2000s and, as a result have since performed on stages across America, Europe and Africa.  Through it all they continued to work with the people in their communities.

Besides being poets, the twins spent more than 17 years working at the Kingswood Community Center in Wilmington, Delaware and continued to expand and develop their idea that art could counter the dream-killing effects of poverty and hardship.

Mills is a family therapist  and community-based social worker and Chukwuocha is a social worker who has served on the Wilmington City Council for a number of years.

In 2014, Newsweek called Wilmington, “Murder Town USA” and said it ranked third on the FBI’s annual list of “most violent cities” among cities of comparable size.  It also ranked fifth when compared to all cities with populations greater than 50,000.

Most of the city is safe, Wilmington residents who were offended by the Newsweek article protested.

A 2015 Delaware Today article, “Wilmington Crime: A City That Bleeds,” pointed out that the numbers in the statistics used by the Newsweek report of murder and mayhem are disproportionately centered in areas like the Hilltop neighborhood mentioned as well as other, similar neighborhoods and are the result of a number of chronic problems – not enough jobs, not enough support of education and training, housing issues, and several generations of social ills that have no easy solutions.  It continues to be an ongoing problem.

Over the years the brothers have received a number of awards recognizing them for their community service, including the Village Award (2006) from the Delaware Department of Services for Children, Youth and their Families and a Local Heroes  Award from Bank of America (2006).

The Twin Poets were the State of Delaware Mentors of the Year in 2001, and, in December, 2015, they were named the 17th Poet Laureate (a shared title) of the state of Delaware by former Governor Jack Markell.

Another article in Delaware Today, “Wilmington’s Twin Poets Provide Healing Through Art,” chronicles the extraordinary efforts they’ve made and continue to make to help save the children in the poorest of the communities they service from the hopelessness and helplessness that the disenfranchised experience in their world.

The brothers founded Art for Life–Delaware, a community-based, social worker-led mentoring program that uses art to change the lives of delinquent youth and their families.

They also developed G.O.A.L.S. (Getting Organized Always Leads To Success), a tutoring and mentoring program that teaches children about the importance of self-expression and writing.

This Hearts and Mind Film published in 2013 features the Twin Poets poem, “Why I Write”:

“Why I Write” is also the name of a website about the brothers and their work that was initially designed by the interactive design students at the University of Delaware.

As Chukwuocha says in the Delaware Today article about their life, the brothers have refused many invitations to become rap and hip-hop sensations over the years.  They wanted to “make a difference,” he said.  They continue trying.

Header picture credit: “Peace Keeper Marching” by TC Davis via Flickr [CC BY-NC-ND 2.0]  The description says, “The Wilmington Peace Keepers are volunteers who visit neighborhoods where there has been a recent shooting, to comfort and pray with families and friends and empower the neighborhood for change.”

16 thoughts on “THE TWIN POETS”