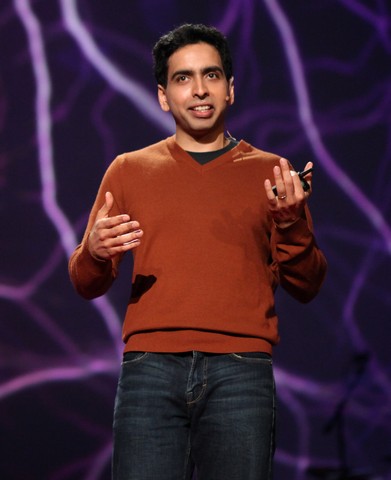 Then, other relatives and friends want help in mathematics as well so the analyst moves his tutorials to YouTube where he creates an account so he can meet the demand for his help and…

But, wait.  There’s a YouTube video that’s a collaborative effort of Reddit’s entrepreneur community and the Google Cloud Platform called “Sal Khan’s (Khan Academy) Formative Moment.”  It tells the story better than I can.  CLICK HERE to see the video….

In the beginning, the teaching videos were hand-made by Khan for his cousins.  The earliest ones were about math and followed the interests and needs of the cousins.   The videos show step-by-step doodles and diagrams on an electronic blackboard.

As he put them together, Khan presented short, often funny, lectures explaining what he was doing and why.  Khan listened to the feedback from the cousins, working with them to make the things more effective as learning tools for his students.  He was surprised when the videos attracted the attention of literally thousands of viewers from around the world.

Later, after Khan had quit his day-job and stayed home, working with his close friend Josh Gefner to develop the content of his YouTube channel; after they put up the Khan Academy website (khanacademy.org) as a wrapper for the videos hosted on YouTube; after Khan spent a great deal of effort and time promoting the Academy and their mission; and after the Academy began receiving donations to support their work, it began to grow by leaps and bounds.

The organization also developed a network of content specialists who help put together the courses as well. Besides the broader range of subjects and lessons, updates have included collaborations with the Stanford Medical School, and even math and science explorations with NBA star LeBron James.

In August 2015 Khan Academy partnered with Disney & Pixar Animation Studios to launch Pixar in a Box on Khan Academy. The goal, they said, was to show how academic concepts students learn in school are used to solve creative challenges in the making of Pixar films.

All of the videos available on the Khan Academy website are licensed under a Creative Commons (BY-NC-SA) 3.0 license.  Khan really did mean it when he said he wanted to make opportunities for learning available for everybody.

Tools on the website like the Coach Resources section (aimed at parents, tutors and teachers) has helpful tutorials on using the site as well as monitoring software to help track the progress of students.

An adaptive web-based exercise system that generates problems for students based on their skill and performance was also developed.   Teachers and tutors could track a student’s progress without having to subject them to the stress of testing.

Software for doing the exercises with feedback and continued assessment was made available as an open source project under the MIT License.

The dashboard on the site improved over time.  Navigation got easier and lessons could be recommended based on student progress.  Students were able to pause the lessons and return to it at a later time.

The website has been translated to 23 languages and its videos to 65.  There are seven “official” websites now, each in a different language.

Khan and his Academy have won all kinds of prestigious awards nationally and internationally.

The Academy is entirely supported by donations from assorted foundations and is used as a tool by many educators and parents, mostly because it apparently works.

Khan wrote a book about his vision of education, THE ONE WORLD SCHOOLHOUSE:  Education Reimagined,  in 2013.  In it he presents a case for returning to “mastery learning,” a concept that, he says, was abandoned in the last century.

The Academy and Khan do have detractors.

Professional educators who don’t like the Academy harp on the fact that Khan does not have a background in pedagogy.

What’s “pedagogy”?  Apparently, it is the “art and science of teaching.” It’s the way teachers teach and nurture child development according to the theories behind modern education methods.

There are different flavors of pedagogy and a number of different schools of thought.

Khan and the instructors who put together videos for the Academy don’t work on trying to develop anything in their students.  They just want to share the nuts-and-bolts of how to solve a particular problem and to add to the factoids and thoughts already in the learners’ heads.

The Khan Academy seems to have some virulent haters as well as rabid fans.

The critics say there is nothing “new” about teaching through lectures.  Some haters have even gone so far as to call Khan “boring” and “incompetent.”

It is true that the Academy lesson videos are basically just simple lectures that show students how to do things.  They tend to present the practical, procedural side of things.

Sometimes there are inaccuracies and errors.  There are sometimes confusing bits in some of the videos, especially when the whys and wherefores of a system of doing things are discussed.  These inconsistencies are quickly corrected when they are found.

The videos themselves are plain.  There’s no music, no distracting cartoons, no fancy tricks, and no talking heads in them.  There’s just the lesson.

Students can concentrate and focus on what they are doing.

The best thing about these videos is that the students control the pace of the learning and they can go back over the parts that don’t make sense to them again and again.

Khan points out that he has always said that the Academy can be used as a tool for the classrooms and for education.  He, himself, has never advocated replacing more traditional paths with the Academy videos.  “I think they’re valuable,” he says, “but I’d never say they somehow constitute a complete education.”

The haters, however, especially take issue with Khan’s idea for “flipping the classroom.”

A part of his vision is for students to watch his lecture videos at home, try some of the problems and when the class meets, the students and their teachers can engage and try hands-on projects.

They can have more discussions among peers as well as more one-on-one interactions between the teacher and students.

Academy critics have been called bitter and threatened.  Khan’s “followers” are accused of being a part of a “cult.”

My own thought on this is that Khan has succeeded in making a remarkable product.  (Folks remark on it…and the buzz continues.)

Here’s another Evan Carmichael offering in his YouTube video series of the “Top 10 Rules for Success.”

You may want to check out Carmichael’s website, #BELIEVE (EvanCarmichael.com .)

These are Salman Khan’s top 10:

WRITING DOWN THE BONES

Writing down the bones

Helps in ways that

Echo down through the years.

You do not forget so easily….

The daily grind does not wear away

That blade of pain

That lances through your complacency,

Presenting you with the steaming guts

You remember, and you honor

The ephemeral beauty of

The joys that grab your heart and

Buoy it up and up

Until it floats ‘mid nebulous clouds of stars

In the deepest dark,

Catching rides on chuckling comets and

Tickling the edges of black-hole mysteries.

And you savor again the enveloping warmth

Of the welcome home.

You do not, cannot muck it up

With think and double-think

When the raw is sitting on the page

Waiting for you to touch it yet again.

The lessons transmute and morph into

Axioms that divide into precepts and corollaries

And “whereas-es” and “wherefores” spiral out and out

As your mind expands…

Big enough to cradle the sky…

As Dragon uncoils from sleep,

As Phoenix burns in flight,

As Tiger stalks through the underbrush

While the winds of change blow through.

It’s a hard road, this writing down the bones,

And the tracks of the tears running down your face

Mark the paths down which it takes you.

Picture credit:  Salman Khan at TEDx talk (cropped from original by Steve Jurvetson on Flickr) via Wikimedia Commons [CC BY 2.0]