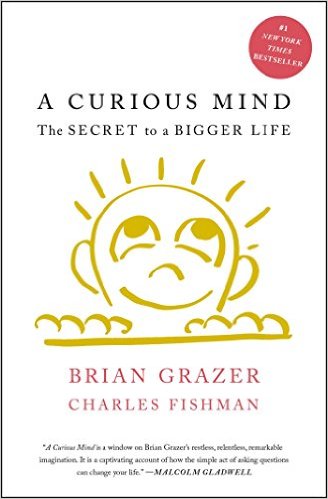 PRODUCT (Book):  A CURIOUS MIND:  The Secret To a Bigger Life

Brian Grazer knows how to “talk story.”  So does his collaborator on this book, award-winning journalist Charles Fishman.

“Talk story” is a Hawaiian-style way of turning one-on-one conversations into an art form.  It is not “small talk.”

When you “talk story,” you ask questions, and then you listen to the answers.  Every answer and each question becomes a part of a bridge that you can use to enter into somebody else’s world-view.

The conversation becomes a tour of another person’s mind and heart.  At the same time, you open up your own world to the other person.  Together you can play.

“Talking story” is a way of making deeper connections with someone else and it turns the ordinary into something that is richer and more layered than just a news report or an annual Christmas brag letter.  It is a way of tapping into the realities of someone else’s life.

Old friends who are used to wandering together in each other’s worlds can hold hands and cross their bridges into each other’s lives in less than five minutes of talking.  All the memories come back in a rush, even if the friends have not seen each other for years.

Two strangers who are adept at ‘talking story” can be holding hands and skipping through each other’s worlds in no time at all.

It is a lovely thing.  According to Grazer, it is also a way to deepen your understanding of life and the world, and is a very good way to tell better stories.

HE’LL PUT YOU IN THE MOVIES

Brian Grazer is a professional storyteller.  With his long-time friend and partner at Imagine Entertainment, Ron Howard, Grazer has been making movies and television programs for more than 30 years.

As both a writer and producer Grazer was personally nominated for four Academy Awards.  In 2002, he won the Best Picture Oscar for A Beautiful Mind, the amazing film about the life story of John Nash, a Princeton-educated mathematician who won the Nobel Prize and who was plagued by devastating schizophrenia.

Glazer’s films and television productions have been nominated for a total of 43 Oscars and 149 Emmys.  His movies generated more than $13 billion in worldwide theatrical, musical and video grosses.

In 2001, the Producers Guild of America honored Grazer with the David O. Selznick Lifetime Achievement Award for his artistic and commercial accomplishments.

Grazer credits his successes to just one thing:  following where his lively, active curiosity leads him.

For as long as he has been in the film industry, Grazer has made a practice of setting up what he calls “curiosity conversations” with “interesting and accomplished strangers.”  The list of people with whom he has shared these conversations spans more than 27pages in the book.  He apologizes for any omissions.

The list includes people from almost every walk of life.  There are luminaries and superstars, scientists and renowned artists, villains and heroes as well as more ordinary sorts.  Each person Grazer spoke with was pursuing some passion or walking a path that engaged them completely.

The talks helped to inspire and inform the films Grazer has successfully produced as well as many other stories that he pitched to various investors that were ultimately rejected.

CURIOUS IS AS CURIOUS DOES

In this book Grazer explores what curiosity is and he explains how he uses it to expand his own world-view.  In the process he also points out how you, too, can use your own innate curiosity to do the same thing.  It is fascinating reading.

In one of the earlier stories in the book, Grazer tells about his curiosity conversation with former L. A. police chief Daryl Gates.  After months of trying to set up an meeting with the guy, the producer finally got in to see the police chief…just as the city of Los Angeles was on the verge of exploding in the aftermath of the Rodney King beating by L. A. police officers.  It was a tense time.

[Clicking on the following link will take you to a CNN documentary that was posted on You-Tube in 2011.  The documentary was made 20 years after the beating and the riot that ensued when the police officers who were involved were acquitted of wrong-doing by a jury:  https://youtu.be/tWhYmb1sANM.]

Grazer says, “My visit with Darryl Gates was strange, memorable, unsettling.  In other words, it was perfect.”  Grazer’s mission when he met with the beleaguered police chief:  “I wanted a sense of the personality of someone who wears the chief’s uniform with absolute confidence, who commands a miniature paramilitary state.”

Grazer accomplished his mission.  The conversation took him entirely out of his own everyday world.  It helped him to understand that even though he lived in the same city as the police chief, even though he was as successful and in a position of influence in his own way like the police chief, their worlds were “so different they hardly overlapped.”

The police chief and the movie producer looked at “the very same city from completely different perspectives, every day.”

Developing this ability of using his curiosity to step into other people’s world-views has allowed Grazer and his partner Ron Howard to produce 17 movies that are very different one from the other.  Each film explores different very human points of view and different sets of real-life circumstances.

The films have allowed us movie-goers glimpses into where other people’s heads have taken them.  The movies are an impressive array of human experiences.  They include:

Grazer’s thoughts on curiosity, asking questions and listening for the answers, and the ways one can use these things to broaden your own repertoire of ways of seeing and moving in the world is a fascinating study.

The book makes a useful manual for anyone who is cultivating a life that is rich and deep with meaning and mana.

I do highly recommend this book.  It is a most interesting read because, as I’ve said, Brian Grazer is a storyteller.  He knows how to tell good stories….

WHEN THE OLD ONES TALK

Watch when the old ones talk.

Their eyes wrinkle, dart and dance.

The laughter bubbles up.

When they tease, it is a test, you know.

If you can laugh at the world and laugh at yourself

What a joyousness there is!

All the pain of the world is understood

In the laughter of old people.

All the heartaches, all the mistakes,

Forgiven in one burst of gladsome rebellion.

We are all together and one,

Despite the anger, the arguments,

The pain, the despair.

We are one because

10 thoughts on “REVIEW: A Curious Mind”