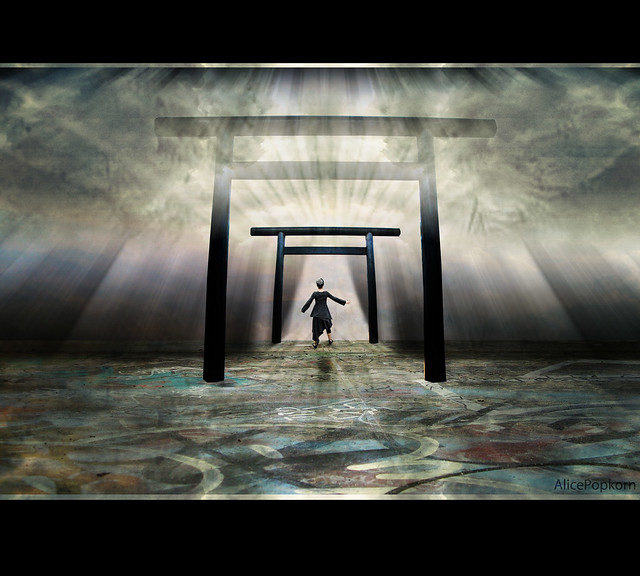 For more than 20 years now, I’ve beaten my head against the concept of wu-wei, an esoteric bit of a mind-boggle that underlies a lot of the Taoist way of walking.

What to say about wu-wei?  Even trying to describe it makes the people doing the explaining dizzy.

Here’s a You-Tube video featuring British philosopher Alan Watts talking about wu-wei.  It has become one of my newest favorites.  It was uploaded by Wiara in 2018.

The guys who run on logic and straightforward thought patterns just dismiss the whole thing as an airy-fairy bit of nonsense.  Martial artists love the stuff and get all mystical-magical about it.

The video explains wu-wei very handily.  Before I stumbled across it, the “simplest” description of it I found said that wu-wei is the way of “doing nothing and everything gets done.”  [Huh?  (Yeah, I know.  Weird, right?)]

FIGHT OR FLIGHT…AND THEN THERE’S FREEZE

After all these years, I’ve finally figured out something.

Mostly we know about the “Fight or Flight” body-reactions we get when something happens to us unexpectedly.

BOOM!  Something happens, and you either put up your fists and snarl, ready to duke it out, or else you run like hell, screaming your head off.

You can get lots of information and opinions and so on about those Fight or Flight body-reactions. Lots of studies have been done on those reactions and we are the beneficiaries of them all.

There is a third body-reaction that isn’t talked about so much except by guys who are into studying anxiety:  Like deer in the headlights or bunny rabbits or prairie fowl shivering in the grass as a hawk cruises overhead, we freeze in total panic-attack mode at the threat of danger.

All kinds of studies have been done by the guys in white lab coats about the Freeze as well, but they aren’t as widely known.

Wu-wei, I think, is a lot about that third body-reaction.  It’s part of an ancient theory about the patterns and movements of the flow of energy in the world and how that all works.

After mapping out these patterns and movements and using the I Ching as a repository for their knowledge, Taoist wise guys developed strategies and game plans about how people could work with these patterns of flow to create the world they wanted to live in.

The origins of the theories of wu-wei are lost in the mists of time.

And, it seems to me, the disciplines and practices that developed around it are all about how we can use the Freeze to help us survive whatever has scared us so badly that we cannot think or move or do anything except experience that panic.

We humans do naturally freeze.  The wise guys tell us we can use the Freeze once the panic dies down (and if we’re not dead or maimed severely) to suss out what the heck is going on so we can go do something about it.

Since the wise guys who studied the paradoxes involved in wu-wei and worked on developing the (still-evolving) disciplines were all way gone into the Mystic, they tended to go hog-wild with the poetry of it all and leave us regular folks sitting on the side of the road, confused as all get-out about it all.

(They can’t help that, those wise guys.  When stars get in your eyes, I think, you just naturally lose the ordinary language that regular people use or something like that.)

Often we act too quickly as a way of avoiding the crisis or else we distract ourselves from it.  Either way we mostly get smashed.

The alternative, according to the wise guys, is to stop and do nothing until we achieve clarity.  Once the panic dies down, we can think clearly enough to figure out what to do next (if we haven’t gotten killed off by whatever caused us to freeze.)

Rabbi David Wolpe, author of MAKING LOSS MATTER:  Creating Meaning in Difficult Times, points out, “The gift in pausing is to allow the wave of shock to pass before you are forced to react to the world….The pause allows you to recover yourself enough to figure out the process of integrating whatever the result of the shock is in your life.”

Humans love action.  We are probably addicted to it.

Mostly us humans think when we are doing something – even if it is random, unfocused and uninspired doing – we are being “productive.”

Often we are doing a lot, but nothing much gets done.  We run around like chickens without heads, bumping into things and flopping down futilely.  Not good.

Soren Gordhamer who wrote WISDOM 2.0:  Ancient Secrets for the Creative and Constantly Connected, says, “Until we can be at peace with nothing happening, in a strange way nothing really can happen since our actions will be an avoidance of non-doing.”

Um, yeah.  Even the smartypants guys get poetic around wu-wei.

In other words, rather than splashing around in giant, boggy mud puddles, stirring up the muck all around us, we just have to not-move and not-do, it says here.  We have to forego setting off even more silty muddiness and adding to all the gunk that’s swirling around in the chaotic confusion of it all.

We just have to stop and let the mud settle down so we can see what the heck is going on under our feet.

Once we can see that there is not some big old hole right in front of us that we are going to fall down into or some big beast waiting to chomp us, we can figure out where to put our feet and maybe get out of that stupid mud puddle.

What we are trying to do, really, is “create conditions that invite opportunities for nothing to occur.”

The problem is, as Gordhamer points out, “The more out of touch and uncomfortable we are with our inner life, the more difficult stopping becomes.”

He resurrects that old 1970s hippie bumper sticker, “Don’t just do something, sit there.”

By just sitting there — waiting, watching and listening to whatever urgent possible catastrophe is unfolding all around – you make room for not-doing and you stop yourself from just mindlessly doing, doing, doing and getting more and more tangled up.

Maybe you’ll find some fellow “soul-mates” to whom you can talk.

Memories of remarkable people who’ve wandered through your life, echoes of old lessons learned from them and all that other stuff in your mind can help you wait for the panic attack to subside.  By sitting still and not doing anything hasty, you also give yourself enough time to figure out the right responses and allow the best answers to show themselves.

Once you’ve got those answers in your grasp, then you can move to go do something that gives you the chance to get outa there!

And, mostly, whatever you do will work better than if you just dive in head-first without checking whether the swimming pool has water in it.

There are all kinds of ways to stop yourself from over- or under-reacting to the assorted situations that come up in your life unexpectedly.

Here’s one that was developed by Elisha Goldstein, a licensed psychologist who has written a number of books and who teaches clinically proven mindfulness-based programs on his own and through InsightLA.

Goldstein introduced it in his book, THE NOW EFFECT:  How A Mindful Moment Can Change the Rest of Your Life.

Once you’ve answered that P question, you’ll at least have a direction you can go.

Goldstein’s S.T.O.P. strategy is a lot like what the wise guys tell you to do.  The wise guys have more poetic verbiage and way more interesting practices to try, but basically it’s the same stuff.

Here’s what I tell myself to do about it all so that it kind of makes sense for me:

What you have to do is gather in all the nebulous clouds of panicky thoughts about the possibly catastrophic future as well as the feelings you’ve generated about what has happened in the past – both about the most recent incident and about similar incidents that you’ve already worked your way through (or not).

You can then give yourself a state-of-the-body report:

“Okay.  So this happened and this is how my body is feeling right now.  My neck is stiff.  I’ve got a dull pain in my lower back.  My stomach’s upset and I feel like throwing up.  Fine.”

“Okay.  These are my emotions:  I am feeling sad/mad/bad/scared…or whatever.  Fine.”

(You do this to make yourself solid again and concentrate the you-ness of you back into your body.)

Then you can give yourself a state-of-your-immediate-world report:

“Are the bad guys at the door right this minute?  No.  Has the someday-maybe catastrophe actually happened?  No.  Fine.”

“Are most of the good things in my life still there?  Yes.  Will the sun come up tomorrow?  Yes, probably.  Fine.”

After that, you can start to look at the situation at hand and begin to assess what you can do as damage control or how you can move towards resolving whatever the difficulty is.

You have made yourself ready to go into deep-thinking and maybe if you play around in there for a while you will be able to come to some insights about what your next move will be.

From there you might decide to fight or run or just get on with your day, ignoring the glitch that will probably self-correct without help from you.

Trying to suss out why

This latest scheme of mine

No matter HOW much energy

I am putting into it.

I can do that.

A really good thing to do?

Here I am on this stupid tuft

There’s mist blowing all around.

I cannot see ANYTHING!

I could use a rescue here, guys.

Is anybody out there?

Are those EYES staring at me,

All red and glowing?

I just remembered something.

I am a Dragon.

What am I doing standing here

Having a panic attack?

Get ON with it, Dumbo!

You can FLY, remember?

30 thoughts on “PRESS PAUSE AND GO FOR CLARITY”