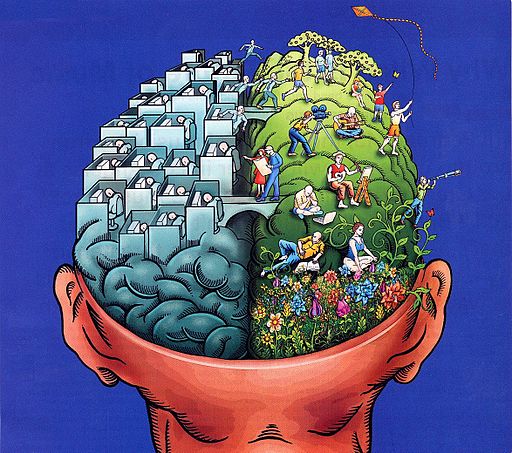 You’ve probably seen this image before.  It’s a cartoon of your brain’s hemispheres and the kinds of thoughts each half of your brain handles.  Left brain is straight-line, logical, and full of words and numbers and measurements and stuff like that.  Right brain meanders around, spiraling in and out, just seeing what-is and mostly having a hard time talking about it.

I was reading Leonard Shlain’s book, THE ALPHABET VERSUS THE GODDESS:  The Conflict  Between Word and Image.  In it, he does a cool riff on “metaphor,” a thing that is dear to poets.

Shlain says, “When people find it necessary to express in words an inner experience such as a dream, an emotion, or complex feeling-state, they resort to a special form of speech called metaphor that is the right brain’s unique contribution to the left brain’s language capacity….  Metaphors allow one to leap across a chasm from one thought to the next.  Metaphors have multiple levels of meaning that are perceived simultaneously.”

Hmmm….That translation from the Greek roots of the word sounds a lot like bridges, doesn’t it?

Poetry, very often, is just metaphors piled on metaphors.  The purpose behind stacking up all of those metaphors is trying to reach a new way of seeing or feeling.  Poems can contain worlds.  Metaphors are how you build them.

In order to use and understand metaphor you have to do the right brain dance.

Right-braining is not linear….no straight, a-b-c progressions.  Right braining is intuitive so any insight you get is experienced all-at-once with multi-colored layers and flash.  (A thing is not LIKE something else…it IS the something else.)

Right braining is not about symbols because the right brain perceives the world concretely.  Whatever’s right in front of you, ready to lick your face, is real and concrete and right brain helps you deal with being in the here and now.

Symbols, on the other hand, are the ultimate constructs and all the meaning in the symbol can be – and probably has been – endlessly explained by words and more words that are sort of packed inside those symbols.

Right brain doesn’t need the word “tree” to know what a tree is.

Or, as the wordy guy who wrote the book says, “Right brain has the ability to cognate images and can simultaneously integrate the component parts in a field of vision, synthesizing incongruent elements all at once.”

There’s one other interesting thing:  Right-braining is timeless.  (Your right brain can’t tell time.)  Shlain throws out a truly mind-boggling concept, that the “left brain is actually a new sense organ designed by evolution to perceive time.”  Whatever.

My own take on it is this:  With your very own brain you can either play with unicorns and leap around galaxies and parallel universes ad nauseum while stumbling around looking for the exit into the world where there’s a pot of chicken noodle soup waiting for you, or you can play around in time and never find the door into that other place with the rainbows you can slide down.

Or you can do both.

Metaphor’s the door that gets you there.  With metaphors you can travel into and out of both of the worlds your brain can see.  If you take a pencil and some paper with you, it’s quite likely that you’ll end up with a poem by the time you get done wandering around.

When I was playing with poem forms, I ran across a Persian poetic form, the ghazal.  Persian ghazals are rhymed couplets that evoke strong emotions.  You pile them, one on top of another until you get a gestalt-thing going.  American ghazals don’t have to rhyme.  Here’s one I did:

‘Merican ghazals don’t have to rhyme, it says here,  maybe ’cause
‘Merica’s home of the brave, land of the free, where the ‘Merican Dream is the only reality.

Picture:  Indian brave, tears rolling down his hardened face
As he rides through the smoking ruins of his un-made village.

Picture:  dark-skinned woman screaming out her pain behind a still face, her hands deftly making her master’s bread
As her man and her babies get dragged off to some other where.

Picture:  poor man at his wit’s end, weeps, slowly walking out the door,
Dragging his broken heart away from love-burdens grown too heavy.

Picture:  brave young girl, growing a baby in her belly,
Walking along the bridge and thinking on her fickle man who never comes ’round no more.

Picture:  soldier for the free, down in the ditch, sobbing, cursing, quaking,
As friendly fire rains down from unfriendly skies.

Picture:  old man’s hands trembling, remember-eyes moist,
As he reaches yet again for the pair of faithful hands — gone now.

Picture:  not-pretty-any-more woman, bruised and broken,
Trembling, afraid her beloved monster will track her down again.

Picture:  ice-cold faces of the brave and the free, hiding insides that shake and shiver,
As they turn away from ones smashed by the Dream.