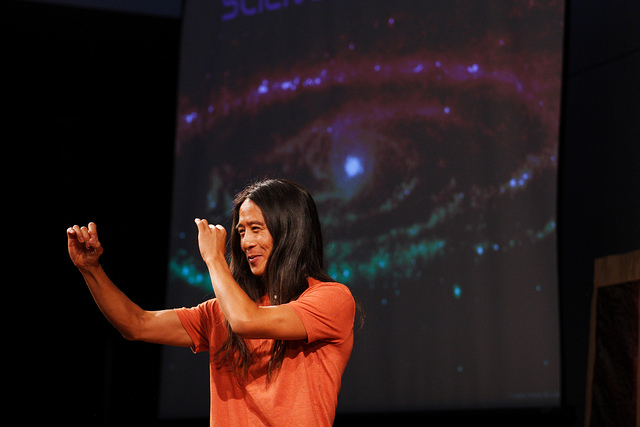 In 2010, Steven Kealohapau’ole Hong-Ming Wong – “the slam poet known as Kealoha” — was designated by Governor Neil Ambercrombie as Hawaii’s first (and, so far, only) official state poet laureate.

The mandate given to Kealoha at the time of his elevation to “poet laureate” by the governor was this: “As Hawaii Poet Laureate, Kealoha will highlight poetry in all its forms as enriching to our lives and giving voice to our history and way of life in the Aloha State.”

His duties, the governor’s office said, include reading, writing and spreading awareness about poetry appreciation as well as performing at official state events like the dedication of a sculpture garden at the Hawaii State Art Museum and performing at the governor’s inauguration.

He can also be asked to represent Hawaii at similar ceremonial events around the country and the world.

Kealoha was doing all that for years before he was named Hawai’i’s official poet laureate.  It has all been a part of a spirited journey that took some unexpected turns.

GETTING TO THE BEST DREAM

Kealoha is a local boy.  He was born and raised in Honolulu.

Like many bright island youngsters he went away to school in the Mainland.  At the time he was dreaming about becoming a nuclear engineer, working on atomic fusion, and changing the world.

He returned home to Honolulu at the end of 2001, after earning a Bachelor of Science degree with honors from the Massachusetts Institute of Technology (MIT) and after spending a couple of years after he graduated working as a business management consultant in San Francisco for the Mitchell Madison Group, a worldwide company with clients such as Adidas, Visa, Samsung, Mattel, Sun Microsystems and Health Net.

Looking at it from the outside, there doesn’t seem to be much of a connect between business management and his major in nuclear physics (with a minor in writing), but as Kealoha says, scientists and engineers are trained to solve problems.

It was in San Francisco that Kealoha discovered slam poetry.  He told PBS Hawaii “Long Story Short” interviewer Leslie Wilcox about that time.

The poetry he heard when he attended his first poetry slam in 2000, he said, just blew him away.  He was instantly hooked.

He said, “…my work just sort of got pushed to the side ‘cause I would spend all my time writing.  I was spending all those late nights, on Sunday night going to these poetry slams.  And Monday morning, going to work all tired.  And I didn’t care; I was living again.  I had something that really inspired me.”

Meanwhile, his work as a consultant had become less meaningful to him.

Kealoha needed to re-think where he wanted to go with his life, so he did what a lot of local kids do.  He did the Full Circle; he came home.

One interesting question that Wilcox posed during her interview with Kealoha struck me as noteworthy.  She asked whether Kealoha had a five- or ten-year plan.  He chuckled a bit ruefully and admitted that he did not.

The guy does not deliberately plan out his path.  He just takes off in the direction that looks like it could work for him and then whales away at it until it does work.  Maybe there is a lesson in that.

HAWAIIANS AND THE SPOKEN WORD

When he got back to Honolulu, Kealoha discovered that the urban poetry and art scene was alive and lively.

At the time of his homecoming, Wordstew, the brainchild of poet-performer Jesse Lipman (recognized as the godfather of Hawaii Slam Poetry), was drawing crowds at the Wave Waikiki nightclub’s open-mic nights.

This YouTube video features a poem by Jesse Lipman, “Jewipino Flowers,” at an early First Thursday gathering in 2013.

Other literati, musicians, deejays, and artists were cultivating “art spaces” where sound and visual artists could meet to collaborate.  Kealoha found a thriving literary and performing arts community.

Its existence was probably due in part to the reverence for the spoken word that has always been strong in Hawaii.

Before there was a written language, all of the native history and traditions were contained in the chants and the mele (song-poems) that were passed down through the generations.

Even when speaking the Hawaiian language was discouraged by those in power over a conquered people, the songs, old and new, could not be silenced.  The habit of word-play continued.

More than one observer has noticed the affinity the island peoples have for it.  Spoken word artist, author and publisher Richard Hamasaki found it to be true when he participated in the state Department of Education Artists-in-the-School program.

Hamasaki found that many of the children he encountered in the program had an affinity for word-play.  He said, “They had ingenious ways of combining what they heard on the radio with the language of their culture and they produced work that was honest and alive.”

This is no small thing.  Hawaiians are descended from poets and songwriters as well as warriors, farmers, artisans, and sailors, and even the children can dance with words.

It comes from a time when the performers of the chants and the mele had to be word-perfect.  They were, after all, the ones who carried the words of the ancestors and of those who held the old wisdoms.  These words held power and magic.

AND THE DREAM COMES REAL

He helped to found HawaiiSlam, a non-profit organization dedicated to showcasing poets from the islands.

HawaiiSlam has been running the nationally certified First Thursdays slam poetry competition, the largest registered poetry slam in the world, and Kealoha has been SlamMaster since 2003.  HawaiiSlam’s ongoing First Thursdays competitions in Kaimuki draws more than 500 attendees each month.

Kealoha has also been on the “Artists-in-the-Schools” roster since 2005, helping to introduce youngsters to the power of words and poetry and he works with young poets who are hoping to compete in the national slam poetry competitions.

He has ventured into theatre as a director, playwright and actor, has performed internationally as a poet and storyteller, and was selected as a master artist for a National Endowment for the Arts program as well.  The list goes on and on.

In an interview for his alumni on-line newsletter, “Slice of MIT,” Kealoha said that being named the official poet laureate for the state was a great honor.

He also said that he feels most fulfilled when people tell him that his work has moved them or changed their perspective.

And isn’t that the best reason to make the journey into your own dreaming?

This YouTube video is Kealoha’s 2012 TEDxManoa Talk which features his poem, “The Poetry of Us”.

Thank you for your visit.  I’d appreciate it if you would drop a note or comment below and tell me your thoughts.