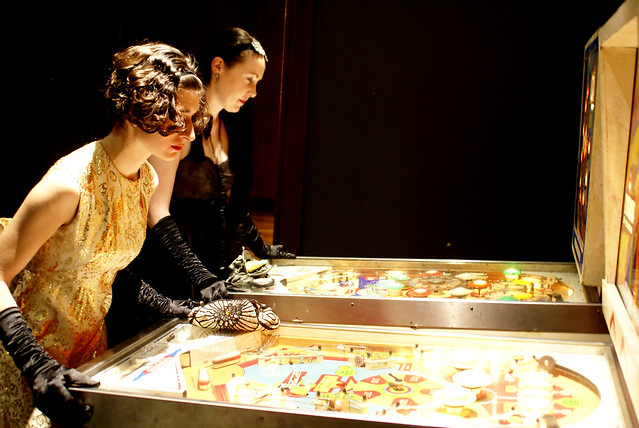 For weeks now I’ve been hung up on the saga of the resurgence of Pinball — that American-made quintessential mix of skill, chance, and enticingly challenging distraction in a glassed-in box that swept up the world and wrapped it up in the epitome of American “cool” and then nearly got killed off by the advent and rise of the now-ubiquitous video game.

The pinball industry lay there gasping at the end of the 20th century.

The death watch began around the time that New York’s legendary Broadway Arcade closed in 1997.

By 1999 only one manufacturer of the games, Stern Pinball Machines, was left standing.

The naughty, “bad-boy” games that used to be “everywhere” during the boom times in the 1970s fell and then rose yet again to new highs in the early 1990’s before they were overshadowed by the huge tsunami of the video gaming onslaught.

The games, in their long history since the 19th century had already survived social and political censure and the “Pin-hibition” (Prohibition-style banning of the games due to their lack of moral rectitude and their wicked influence) in the 1930’s shortly before a World War effort in the following decade ate up the resources needed to produce the machines.

Pinball gaming weathered assorted cultural upheavals, and other vicissitudes quite handily before being blindsided by the popularity of their flashy electronic offspring.

In the last decade, however, Pinball has been staging yet another comeback, due to the efforts of aficionados, collectors, entrepreneurs, game designers and other creatives.

The following YouTube video, published in 2019 by WIRED magazine, “How Pinball Survived Video Games, the Mob and Politics,” features Michael Schiess, a pinball enthusiast who collects and repairs old machines and founded the Pacific Pinball Museum.  It chronicles his story.

HERE’S A QUESTION:  WHY DOES PINBALL KEEP ON COMING BACK?

Many observers watching this scene unfolding say that the resuscitation and resurrection of Pinball is primarily nostalgia-driven.  Pinball machines call up recollections of the carefree, halcyon days of youth, they say.

Parents and grandparents want the youngsters in their lives to experience a part of the history they lived, and many of the themes and the music from the older people’s youth are part of the Pinball way-back-when vintage machines.

Some of the games are tied to important moments in the older people’s lives and become a part of the stories they tell.

Others say that the real-life visceral experiences of the games themselves and the pop-retro culture that has grown up around them make a big change from the only-ness and isolation engendered by the more severe forms of video gamer geeky-madness.

This is appealing to a new generation that never knew the joy of Pinball, they say.

Some of the present-day world-class tournament-grade pinball wizards talk about the “zen” of Pinball and the magic of the “zone” that they can reach as they focus down on the games for hours on end in tournament play.

They talk about how sometimes they can suss out how to synchronize their play action to the rhythm and tempo of the machine’s game, which very often changes every time they play.

Some of them move their bodies in a physical dance that connects them to the machine and to the whizzing ball.  It becomes an elegant ballet.

For these top-notch players, the game becomes a physical form of fast-moving mathematical calculations of trajectory and positioning and timing that are tied to the laws of physics and to dealing with the forces of gravity and entropy.

It occurred to me that these players are reaching for what researcher-psychologist Mihalyi Csikszentmihalyi calls “the state of flow.”

The players are playing with Chaos and there is a magic there, they say.  Perhaps, for them, this is a truth.

The designers of the new pinball games just want to make the games “more fun” for the players and they bend all their creative efforts to produce that effect.

The best games, as legendary game designer Steve Ritchie says in the “Special When Lit” film, are “easy to learn, easy to play, and hard to win.”

Game designers spend a lot of time setting up the games in ways that challenge players to reach for the very edge of their competence levels.

The designers work on fine-tuning the frustration levels the machine can induce in the players.

Ritchie is a great believer in appealing to the senses.  He’ll use flashing lights, bold colors and distinctive sounds, and he’ll figure out multiple alternative paths and actions a ball can make to add to the experience.

He says it’s like the silver ball is having fun in its own little world and the player is helping it to do that.

The very best games, Nevada game designer Joe Kaminkov says, are the ones that leave you “one shot away” – the ones that make you want to try again and again to make that silver ball dance your way.

The entrepreneurs who are riding the wave of the Pinball lifestyle are just glad to add yet another already-proven attraction to the arsenal of their ongoing entertainment and amusement enterprises.

In any case, à la Mark Twain, the rumors of the death of Pinball are “greatly exaggerated.”

MORE ON THE FLOW AND THE GUY WHO NOTICED IT

In his classic 1990 book, FLOW:  The Psychology of Optimal Experience, Mihaly Csikszentmihalyi describes how learning to notice, induce, and dance in what the scientist-philosopher called “the state of flow” can lead to developing oneself into a person who consciously experiences a total involvement and enjoyment of life no matter what the external circumstances.

Csikszentmihalyi actually coined the name “the state of flow” in 1975 when he was trying to describe the mindset of a person fully immersed, focused, and involved in the process of any activity.

These days we call this state “being in the zone” and it happens in any situation that requires concentration, problem-solving, and physical and mental performance.

The book neatly balances philosophy – ancient wisdoms as well as the musings of various deep thinkers down through the ages — and 20th-century science’s extensive research into so-called “positive psychology” which looks at human strengths such as optimism, creativity, intrinsic motivation and responsibility.

In his book, Csikszentmihalyi presents ideas that have been validated by scientific studies (as well as more esoteric wise-guy stuff).

You can learn to use these internal human strengths, he says, with conscious intent and purpose to meet and resolve various life-challenges.

He shows you how doing that is very likely going to affect your daily living and your own personal happiness.

Even now, FLOW (the book) continues to influence and inform researchers and regular people all over the world.  It has been translated into more than 20 languages.

The researcher with the impossible name, now 84 years old, made studying the concept of the flow state and how to use it to engineer life-long happiness his lifetime’s work.

He wrote many books and articles that explored more fully how one can manage one’s mind to flow with life gracefully, bringing the high-flying ideas down to earth for us ordinary sorts.

His major focus, it seems to me, has been figuring out how to live an ordinary, messy, complicated and complex modern life in an extraordinary way – one with meaning and mana in it.

He helps you construct your own flippers that help keep your silver ball in play.

THE SELF THAT HAS SELF-CONTAINED GOALS

In his book, Csikszentmihalyi introduces a mindset that he calls the “autotelic self.”

He says developing this self is one of the benefits of consciously playing in the flow state.

“A person who is never bored, seldom anxious, involved with what goes on, and in flow most of the time may be said to have an autotelic self.  The term literally means ‘a self that has self-contained goals’ and it reflects the idea that such an individual has relatively few goals that do not originate from within the self.”

He points out that for most people, the goals they have are shaped directly by biological needs or social conventions.  These goals originate outside the self.

The primary goals of people who have an autotelic self, on the other hand, arise out of their own evaluations and thoughts about real-life experiences they have undergone.

Autotelic people make up their own goals using the lessons they’ve learned from their own lives.

This is a self I find most attractive.  Being able to embody lessons learned from life and to actually use them to walk through the world better sounds pretty darned good to me.

People with an autotelic self are easy to recognize, Csikszentmihalyi says.

You know, it seems to me that those pinball wizards may be onto something.

If, like Broadway Arcade owner Steve Epstein, you equate pinball with “a universe in a box that is a lot like life,” then you’d probably agree with him when he says, “You never know what you’re gonna get around the next corner, but you’ve gotta go and be involved in it.”

That, it seems to me, is a grand way to walk through life.

(It’s all just rock and roll)

And waiting for us, one and all,

Is the deepest darkness of the Hole.

None of us can win,

But we can wizard-out with style.

We’ll be heroes of the gath’ring crowd

Just for a little while.

And Entropy’s his Queen,

But in that time, that space,

We can be the best the world’s ever seen.

The numbers stack on up

As we keep that ball in play,

And the streaming lights blink on, blink off

As the startle-noises fade away.

The bumps, the grinds…no TILT allowed…

Our flashing hands do fly.

For us, it’s all about the Zone,

‘Cause that plunger waits…a challenge:

There’s another run to make.

Just one more time we go, we go,

As our freedom-thirst we try to slake.

‘Cause this time’s done, but here’s another,

One more opportunity to take…

To the magic past the fake.

26 thoughts on “PLAY A MEAN PINBALL (YES YOU CAN)”