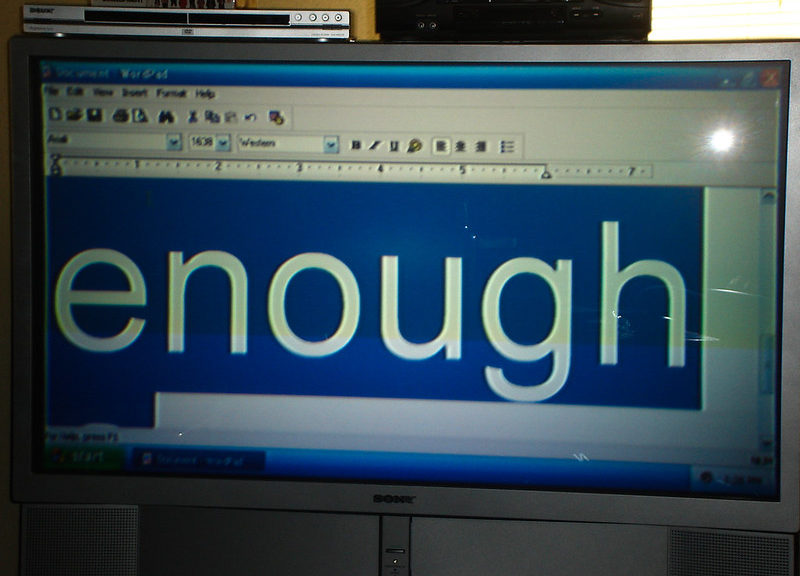 The stories are usually about some guy sitting all alone in a big old mansion on a hill somewhere.  He has everything and yet he feels like he has nothing.

(Usually the tale is about a guy, but, really, we could easily substitute a gal in there instead these days.)

Here’s a thought:  Maybe it wasn’t greed that led that lonely one down the road to Empty.  Maybe he or she just didn’t recognize when they had gotten to “Enough” and just kept on going.

It happened to The Light of My Life’s boyhood friend Ed.  They grew up together, a couple of wild kids running through the Oregon woods, fishing and hunting and doing Nature Boy things.

When high school ended, my LOML went off to roam the world and Ed settled in to a job in town hanging doors in houses and installing hardware (hinges and knobs and things).

Ed had a great work ethic.  He was honest and honorable and did good work.  He got more and more door jobs so he hired some friends to help out.  And then somebody asked him, “Can you do windows?”  Ed thought about it and hired a friend or three who were good at that and on they went.

It was just around the time of a big building boom in Portland during the Vietnam war times and Ed and the boys kept getting tapped to do more doors, more windows.  Apartment buildings and business office buildings have a lot of windows and doors, you know.

Ed accumulated a fleet of trucks for his crews of guys and he hired more friends who were really good at fixing them.  He built warehouses with baseyards for all the supplies and equipment he needed to get the work done and he hired some other friends to manage all those resources.

As an entrepreneur, he felt responsible for making sure that his friends kept working and he worked the hardest of all keeping everything running right.

He never knew what to do with all the money he was making so he bought stuff everybody said he should get.  Unfortunately, he was so busy being responsible and taking care of business that he really did not have a lot of free time to enjoy all the stuff he had accumulated.

By the time he was in his mid-thirties “rich” had happened to him.

However, the Real was that Ed really had not thought much about the direction he was headed.  He just went along wherever the road he was on was taking him.

In truth, he was a “victim” of the times and of his own honor and excellence.  “Rich” happened to him; it wasn’t his biggest numbah-one goal. Everybody told him he “had it all”…a wife who was his childhood sweetie, children he adored, a big old house on a hill and lots of really neat toys guaranteed to warm the cockles of a born redneck’s heart.  Whoo-hoo!

One day, a good long while after high school days, Ed came to visit his old friend Mathew who was living in the wilds of Huelo on the island of Maui.  This is the poem that Mat wrote about the visit:

Of being a big success

Came calling down my forest path

To find me in my wooded nest.

He said he’d married long ago

A girl who also strived.

They worked for their dreams,

They bought a house and two turned into five.

He got a job doing piecework

And began to hire his friends.

He rented a big old warehouse

To put his equipment in.

Next, he got a fleet of trucks

Then men to tend them all.

Of his calendar on the wall.

His wife and family stayed at home

In their palace on the hill.

They never saw him ‘round the house

He had contracts and deals to fill.

My friend was working day and night.

He’d sleep from two to four,

Sometimes on his sofa,

Sometimes on his floor.

He made his magic million

In seven years of toil,

But he couldn’t stop the workers

So he made a million more.

One day his car broke by his home

On his way to a very big deal.

He walked to his house to use the phone,

But the door was barred with steel.

A note was pinned onto the door,

His name written on the page.

He opened it up and looked inside

And this is what it said.

“On August tenth we left with George.

“A man you never knew.

“He doesn’t have much money,

“But he loves us true and through.”

“We’ve gone to settle in the west

“On his farm in mountains high.

“I hope your millions were worth the price

“Of us leaving with no goodbyes.”

“I know you loved us dearly,

“But we’re tired of living alone.

“We’ll write you when we’re settled.

Now he wanders the earth alone.

In hopes of finding his lost love

And restoring his peace of mind.

Years passed.  When Mat and Ed reconnected many years later Mat got to learn where his friend’s road had taken him during the intervening years.

Ed said he went through a period of confusion and pain.  He sold all his extraneous stuff and moved to Tucson.  A brand new start.  He went on to build a life that included all of the things he had loved as a young boy.  (Hunting and fishing played a big part in it.)  He found another lady to share his life and they were happy.

And this time, the good times kept on rolling and Ed made sure they didn’t get away from him again.  This time he made sure he paid attention and made the time to enjoy the life he had mindfully built.

SO…HOW MUCH IS ENOUGH?

It is a funny thing.  There are all kinds of answers to that question, and the answer does depend on who’s asking…and who’s answering.

Here are several YouTube videos, each with an answer.  Perhaps one of them will resonate with you.

The first “How Much Is Enough” was published in 2010 by ChickenSoul84.  It’s a modern reiteration of a very old teaching story about an encounter between a fisherman and a businessman.

The second video of the same name was also published in 2010 by Retire Happy and features retirement counselor and financial educator Jim Yih in the middle of one of his workshops about how to retire happy.

This third one features author and motivational speaker Randy Gage and was published in 2014 by Prosperity TV.

Which one speaks to you most?

MY FAVORITE VIDEO ABOUT “HOW MUCH IS ENOUGH”

This video is my own favorite.  It’s a video-collage put together in 2020 by Green Renaissance, a collective of young filmmakers who tackle big questions.

This ten-minute video is made up of bits and snippets of other videos by Green Renaissance over the past couple of years that feature the individuals showcased in the video-collage.

In their notes about the video, the filmmakers say, “There’s no denying that money is an important part of our society and having a degree of financial stability increases our ability to enjoy life. But the reality is that most of us live in a world of overabundance. We need to realise that we have enough. We need to stop linking our self-worth and happiness to doing and having more. That’s a journey worth taking.”

Click the button below if you feel moved to support the efforts of these young people.

Perhaps the most important thing of all, when you’re working on constructing a life with meaning and mana, is knowing what nourishes and nurtures you and knowing what makes your heart sing.

If you don’t know what your “enough” is, how will you recognize it when you go on past it?

This is something worth thinking on.