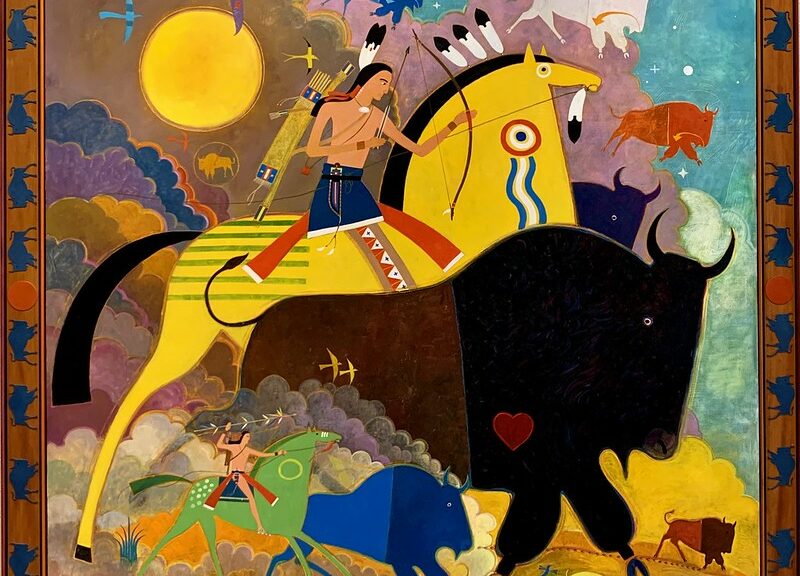 Poet, artist and musician Joy Harjo is a member of the Mvkoke (Creek) Nation.  (More usually, that word is spelled “Muscogee.”)

Harjo became the first Native American to be appointed as a Poet Laureate Consultant in Poetry to the American Library of Congress in 2019 by Librarian Carla Hayden.  In case you didn’t know, the Library is America’s oldest federal cultural institution and is said to be the largest library in the world.

As well as other things, national poets laureate get to help the huge library develop programs that foster the art of poetry, expand the library’s collection of all things related to poetry and help them figure out how to provide services for poetry makers, scholars, and the rest of the citizenry.

When she elevated the poet to the post, Dr. Hayden said, “Joy Harjo has championed the art of poetry – ‘soul talk’ as she calls it – for over four decades.  To her, ‘poems are carriers of dreams, knowledge and wisdom,’ and through them she tells an American story of tradition and loss, reckoning and myth-making.”

The good doctor went on to say that Harjo’s work “powerfully connects us to the earth and the spiritual world with direct, inventive lyricism that helps us reimagine who we are.”

Shortly after she became the poet laureate for the United States of America, Harjo stopped by the offices of the Academy of American Poets, where she was a member of the Board of Chancellors, in order to do a pop-up reading of her poem, “Grace.”

The reading was uploaded to YouTube by the Academy.

The last lines of her poem still resonate with me:

“I would like to say, with grace, we picked ourselves up and walked into the spring thaw.  We didn’t; the next season was worse….And, Wind, I am still crazy.  I know there is something larger than the memory of a dispossessed people.  We have seen it.”

WE INDIGENES ARE POETS TOO

When she accepted the position as poet laureate, Harjo was working on a major book project.  She was acting as the chief editor for the first-ever comprehensive collection of poetry by indigenous writers ever made.

The book was a 400-plus page anthology with works from 160 indigenous poets who represented 91 of the more than 500 federally-recognized tribal nations in America.

The poems in the book date from modern times and go back to the 17th century.  There are both written works and poems which are traditionally delivered orally included between its covers.

The ages of the featured poets range from high schoolers whose poems appeared in tribal or community newspapers more than 100 years ago, to more mature spoken-word artists, to the late Louis Little Coon Oliver (Mvkoke), whose first poetry collection was published after he turned 80.

Harjo was helped in this endeavor by her fellow editors, Leanne Howe and Jennifer Elise Foerster, by her students at the University of Tennessee, Knoxville where Harjo was teaching at the time, and by “contributing editors” who were all expert native poets knowledgeable about at least one of the five different geographical sections into which the team somewhat arbitrarily divided up the country.

The title for the anthology, WHEN THE LIGHT OF THE WORLD WAS SUBDUED, OUR SONGS CAME THROUGH:  A Norton Anthology of Native Nations Poetry, is lyrical.  Its effect is an inclusion, an honoring, and a deepening of the understanding of what it is to be human.

The collection has been called a “landmark” book.  It is the first time anybody tried to recognize and honor such a wide diversity of native voices and viewpoints.  The book has also been credited with helping to make our collective story as a country bigger and more layered.  More of the missing voices can now be heard and acknowledged.

In an interview with Clancey D’Isa for the Chicago Review of Books, Harjo said the book “reframed” American Poetry to include Indigenous Poetry.  She goes on to say:

We are poets, we have accomplished poets, and we had poets long before there was an entity called America. We were here, we are here, we didn’t disappear or die; but, we are living voices and we are poets.

The Norton anthology is proof of that one.

(For the complete interview, which includes a very interesting account of how the book came to be, click on the button below.)

About half of the poets laureate appointed over the years have created and developed large scale poetry projects designed to raise awareness and appreciation of poetry on a national scale.  These major works are called “signature projects.”

When she was appointed for a second term as the national poet laureate in 2020, Harjo began work putting together “Living Nations, Living Words.”

Each of these poets were asked to choose a poem based on the theme of place and displacement.  They were also asked to choose poems that focused on visibility, persistence, resilience, and/or acknowledgement.

The “Living Nations, Living Words” project is available online.  The first two elements of the work were created during Harjo’s second term as poet laureate.

The STORY MAP – an interactive ArcGIS web map – is the foundation of the signature project.

The map was developed by Harjo with the Library’s Geography and Map Division after she asked the poetry makers to pinpoint the place on a map of the United States that each participating poet gave as his or her point of origin.

You can click the markers on the map to access each of the poets and their work.

Harjo says (and I agree) that “place is central to identity, to the imagery and shape of the poems, no matter what country, culture or geographical place.”

The words of poets rebuild the worlds they have known and create the worlds of their dreams.  That’s one of the most awesome power of words.

The map is connected to an ONLINE AUDIO COLLECTION.  These are the captured voices of each of the participating poets in the “Living Nations, Living Words” project reading one of their original poems and then talking about their work.  It is housed in the Library’s American Folklife Center.

Hearing the poets adds another dimension to the project.  Poems are meant to be heard.  The voices of the native poets reach out for your ears and for your heart.  Maybe it might be a good thing to light a fire or listen to the poets speak by candlelight.

AND THEN “GREAT” GOT EVEN BETTER

In 2021 Harjo became the second poet laureate ever to be appointed to a third one-year term by the Librarian of Congress.  Harjo still had work to do as the 23rd Poet Laureate of the United States.

During her final year the poet collaborated with her anthology’s book publisher as well as with a group of educators as she worked on expanding the usefulness and the scope and outreach for her remarkable signature project with two more elements:.

A book, LIVING NATIONS, LIVING WORDS:  An Anthology of First People’s Poetry, was published in May, 2021 by W. W. Norton and Company in association with the Library of Congress.  The book is a compilation of all of the poets featured in the project.  Readers could hold the poems in their hands.

Then a COMPANION EDUCATOR GUIDE was released by the Library of Congress in November, 2021.  Harjo, an educator herself, wanted to point out various resources that can help teachers of children in grades 7 or older to do their work.

[If you click on the names of the different elements in Harjo’s master work, you’ll be able to access or get information about each of them.]

Harjo pointed out in her interview with Clancey D’Isa:

“We can speak out in poetry in a way that allows people to hear multi-dimensionally. A poem can be constructed of many dimensions. Therein is the gift of metaphor.

“Collectively the arts are like that; but, poetry, because we’re humans and we speak, has that power.”

The lady speaks a profound truth, one that she has served for her whole life.

4 thoughts on “OTHER VOICES: Joy Harjo”