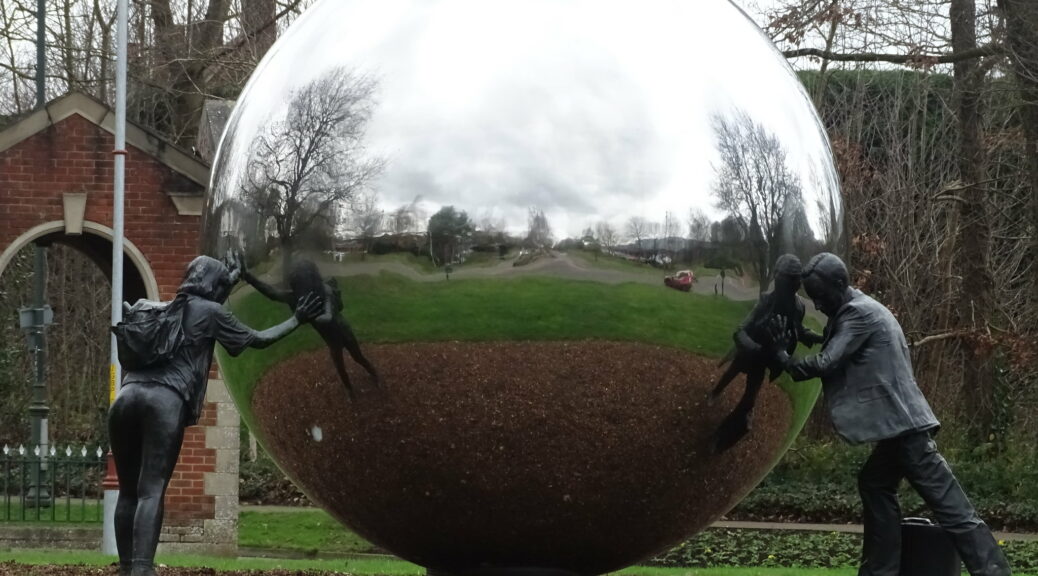 As a poet and a writer, I believe in the power of words.  It’s a part of the nature of the scribblers in the world, that.  We believe our words make a difference.

No, I lie.  Real writers and poets believe we are magicians who remake the world.

When all is said and done, it seems to me, all of us humans are little more than a collection of words.  The stories we tell ourselves about our lives, about ourselves, and about each other as we walk through our days shape the way we see the consensus-world all of us build together.

One of my favorite wordsmiths, Patrick Rothfuss, has said,

“The truth is that the world is full of dragons, and none of us are as powerful or as cool as we’d like to be.  And that sucks.  But when you’re confronted with that fact, you can either crawl into a hole and quit, or you can get out there, take off your shoes, and Bilbo it up.”

The stories we tell ourselves can give us the courage to “Bilbo it up.” And, if we get good enough at that, maybe we can go on to emulate Gandalf or Merlin or Zed.

THE MAGIC STARTS WITH SELF-AWARENESS AND SELF-EXPRESSION

The ancient wise guys and the Smarty Pants who study such things tell us that self-awareness begins with being able to notice and to describe to ourselves and to others what is happening around us and how we are feeling now.  Very often the words we use to tell our stories affect how we walk, and the ways we walk help to make our world.

There is a remarkable and ongoing project that illustrates how the ways we express ourselves can have a major impact on the shape our lives take.  This concept is highlighted in the work done by The Actors’ Gang Prison Project among adult and juvenile prisoners in the California Department of Corrections and Rehabilitation (CDCR) system.

The Prison Project is a series of acting and team-building training workshops for incarcerated felons that include group discussions, rehearsals and performances. These workshops have proven to be remarkably successful in helping the prisoners learn to recognize and express their emotions more effectively.

The prisoners work with teams of professional actors who belong to a group who sees the theater stage as a sacred shared space where humans can come together and tell their stories and their truths fiercely and with rigorous honesty.

The Actors’ Gang began with eight UCLA students who formed an experimental theater group in Los Angeles in 1981 that has continued to evolve and grow through the years.

Click on the button below for more of their story.

One of the original eight, actor and filmmaker Tim Robbins, serves as the artistic director for the group.

Over four decades, the group has managed to meld a cocky, anarchistic punk-rock sensibility with the rigorous and demanding traditions of the commedia dell’arte style of theater.  It is this style of theater that apparently resonates with the inmates.

In commedia dell’arte there are no scripts to memorize.  The stories are already in place – old, familiar stories of love and hate and heartbreak.  The characters are hackneyed clichés that everyone recognizes.

The words are improvised.  The performers work their way through the stories using their own words and movements and feelings, building on the words and actions of the actors who are with them on the sacred shared space that is their stage

The Prison Project is part of a partnership between the CDRC and the California Arts Council to use the arts as a way to “combat recidivism, enhance rehabilitative goals, and improve the safety and environment of state prisons.”

The Arts Council featured the project in a short film uploaded to YouTube in 2016.

The Art Gang’s endeavors have won international recognition as an innovative rehabilitation program that actually gives the prisoners tools they can use to help them find better ways of dealing more effectively with other people in the world outside prison walls as well as in their current situations.

I’ve been thinking about all of this as I swim around in Brené Brown’s extraordinary master-work, ATLAS OF THE HEART:  Mapping Meaningful Connection and the Language of Human Experience.  The gorgeous reference book came out in 2021.

I am fascinated by the tale of the book’s making.

It began with a content analysis of comments from the extremely popular online courses in 2013 and 2014 that were based on Brown’s work as a research professor at the University of Houston.

Brown calls herself a “grounded theory” researcher.  She and her research team start with the real-life experiences of the people they are studying.  They watch what their subjects do, make up theories about why they do like that, and then see whether those theories hold up in real life.

What Brown and her crew study, mostly, is how people make connections with each other and with themselves.

From 2013 to 2014, more than 550,000 comments were collected from the 66,625 participants enrolled in Brown’s online course.  The data was put through the wringer using two important questions: It was a massive undertaking and yielded 150 emotions and experiences that the crew organized and categorized.

In the process, the crew asked for and got feedback on all of these feelings and life-stories from a group of experienced therapists actively working in a wide diversity of mental health settings that stretched across the gamut from addiction and community health and counseling to inpatient psychiatry and individual and group psychotherapy.

The feelings and stories got winnowed down to the final total of 87 that is presented in the book.

Meanwhile, over a three-year period, Brown and her senior director of research Dr. Ronda Dearing, reviewed close to 1500 academic publications about studies done on the emotional lives of humans.

The researchers used this information to help them clarify and make sense of the ways the people who were being studied actually used the language and the individual words to tell their stories.

And then Brown and her team had to present their massive tangle of factoids and data to the rest of us in a form that was understandable, meaningful, and useful.  Whew!

TURNING IT ALL INTO ROAD MAPS OF THE HEART

The decision to use the art and science of cartography – mapmaking – as a model for organizing, prioritizing and integrating all the data that had been gathered was, to my mind, nothing short of brilliant.

How a mapmaker chooses and arranges the data included in a map will definitely affect the way people travel through an area.

As one who lives in an ancient, many-storied historical place that is also an area that is environmentally fragile and is a tourist destination as well as a much-desired place for people who want to buy a piece of our rock, I have encountered a wide range of very different maps of the very same small area.

The stories that are embedded in the markings and labels included in these different maps present aspects that are a part of the place but not the whole of it.

However, every story is true on some level.  You just need to know how to read them and what to use them for.

As Brown points out, ‘We are meaning makers, and a sense of space is central to meaning-making.”

The three questions that maps answer, according to Brown, are these:

I agree with Brown that we need landmarks, always, to orient ourselves in the world and that the language we use to label what we are experiencing in our lives can help us get to a clarity that will allow us to make better decisions about where we go next.

HOW TO USE THE ATLAS

Of course, there is a proliferation of book reviews and “ooh-ooh-I-like-it” videos floating around on You-Tube as well as several of Brown’s very shiny promo stuff.

One reviewer is using the book as a springboard for family discussions and explorations about feelings.

Another has a circle of friends who are doing book club-style gatherings centered around the book.

I found one YouTube video, by Nathan Lozeran, the creator of the Productivity Game blog, that presents pragmatic thoughts on how to use the information presented in Brown’s book to expand your ability to make meaningful connections in order to improve your productivity at work.

It is a great model for developing your own ways to explore how you can make use of the results of Brown’s research.

The video, “ATLAS OF THE HEART by Brené Brown | Core Message” was uploaded in 2022.

I am looking at the forty-ninth quote by somebody famous,

One of a series that tell me this so-called Truth:

That this thing they call “forgiveness”

They tell me if I forgive your me-defined trespasses,

Then I shall be “at peace” with me

I think they lost me, all these ones

When they implied that

I actually understand enough about anything

To take what you do personally.

I’m not sure I am that wise.

Who are you to offer me your forgive?

Does a hawk forgive a fish?

Does a flower need a butterfly’s forgive?

I have to confess:

This makes no sense to me.

As far as I can tell,

We are all walking our walks

In the discreet worlds that we inhabit

As we each make our own way home.

And if your warm leaves me cold,

It could be you’re a penguin

And I’m some sort of tropic bird.

I really don’t know much of anything,

I do wish you well on your journey.

May you find your own heartsong

And may there be joy abiding there.

I do know all these lessons never end,

And you are a part of mine,

I’ll thank you now, my friend.

10 thoughts on “NAME IT, GAME IT (An Un-Seeing Exercise)”