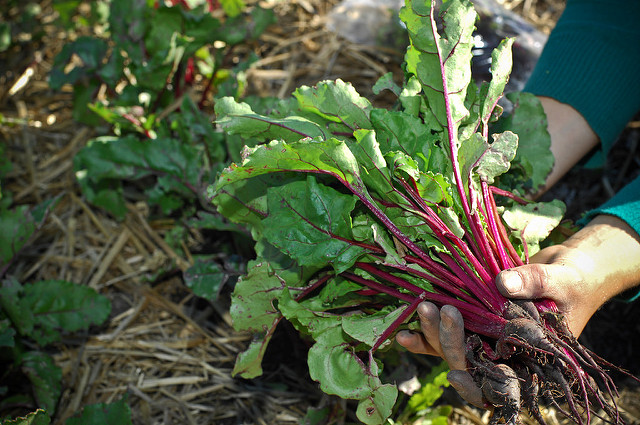 I am reading a most amazing book by a husband and wife team who began a small farm, La Ferme du Bec Hellouin, in 2004 in Normandy.

This small organic farm was deliberately and mindfully built as an alternative to the big industrialized agricultural farming complexes that take lots of expensive equipment and chemical compounds to produce food for the masses.

The farmers, Perrine and Charles Hervé-Gruyers, wanted to make a real family farm, one that produced good food and nourished their family and their neighbors.  They wanted the farm to be the work of their own hands and they wanted it to be a viable business model that would be self-sustaining.

Over the years they brought together in one comparatively small place a collection of sustainable, bio-intensive small-farming methods and techniques which produces a mountain of food in a small place over and over again.

They’re still working on their last objective, turning the farm into a sustainable business, but it is starting to come together very well indeed.

In the process they created a beautiful poem of a garden that supplies food for a number of local restaurants and is also an incubator of ideas and a resource and school that attracts students from around the world.

You can read about their work, their mistakes, and their triumphs in their book, MIRACULOUS ABUNDANCE:  One Quarter Acre, Two French Farmers and Enough Food to Feed the World. 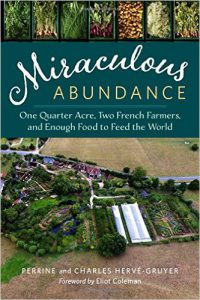 The first, foundational bio-intensive gardening idea the Hervé-Gruyers incorporated into their own gardens was la culture maraîchère, market gardening.  This form of gardening developed in the heart of Paris during the second half of the 19th century and was pretty much the direct descendant of the gardeners who provided the raw materials to the chefs and cooks who fed the kings and nobility of France.

The success of the market gardeners of France from the late 1600’s though the early 1900’s established urban gardening practices that have lasted well into the 21st century and have spawned other methods of growing that are also remarkable ways to produce a lot of good-quality food.

Prince Peter Kropotkin, a Russian anarchist writer of the late 19th century, was very impressed by the Parisian market gardeners.  He pointed to them as an example of how local communities could become thriving, self-sufficient communities and used them as working models that showed how his ideas of strong local economies and self-determination could work. 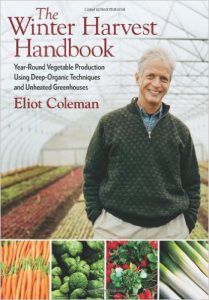 “The cultivated land of the Parisian growers covered up to one-sixteenth (6 percent) of all the land within the city limits of Paris. And the produce selection was remarkable.” Coleman continues, “This system fed Paris all year round with the widest variety of both in-season and out-of-season fruits and vegetables. Hotbeds heated with decomposing horse manure and covered with glass frames allowed the growers to defy the cold and produce fresh salads in January and early cucumbers and melons in May and June.”

The market gardeners were the early forerunners of the post-modern idea of “eating as local as you can.”  They made it real more than 150 years ago.

“French intensive gardening,” as it was called in English, was designed to grow the maximum amount of vegetables on the minimum area possible.  Urban plots used for this way of gardening were invariably small and noncontinuous, after all.

The average Parisian market garden was between one and two acres in size.  The plants were grown on eighteen-inch beds of combined straw and horse manure from the stables. Crops were planted so close together that when the plants were mature, their leaves would barely touch.

This close spacing provided a mini-climate and a living mulch that reduced weed growth and helped hold moisture in the soil.

Companion planting — growing certain plants together that enhance each other – was used. For example, strawberries and green beans produce better when grown together; whereas onions stunt the growth of green beans.

In addition to companion planting, gardeners developed an elaborate schedule of succession planting to get the most from the land throughout the growing season. Timing was key.  An early spring hotbed would be sown with radish and carrot seed broadcast and then transplanted with lettuces at the same time.

But, as soon as the lettuces were harvested, young cauliflower transplants would be set out among the carrots. Once the carrots were pulled the cauliflowers had the frame to themselves until they were harvested and the ground was prepared for the next crops.

Gardeners grew up to nine crops each year and could even grow melon plants during the winter.

The goal of the market gardener was always to “tend the smallest amount of land possible, but tend it exceptionally well.”  The work was non-stop.   The care given to each individual plant was highly detailed-oriented and labor-intensive.  Soil-building became almost a cult.

Among the garden marketers who rented land to make their gardens, it was a condition of the standard renting contract that the gardener could carry his soil away down to a certain depth when his tenancy ends.

The reasoning went that because he made soil himself, it belonged to him and when he moved to another plot he could carry his soil away, together with his frames, water pipes and other belongings.

It was felt that pests attacked only sick and weak plants; healthy plants in healthy soil would not need extraordinary measures. Also, small plots with diverse plantings have a tendency to keep pests from multiplying as they do in monoculture plantings where one pest infestation can wipe out entire fields.

The techniques of season-extension for which the gardeners were especially celebrated began at the royal potager gardens at Versailles under the celebrated head gardener La Quintiie in the 1670s and 80s.

These practices were extended and enhanced so much that the established urban gardens of the late 19th century could provide fresh vegetables for much of the year in Paris. 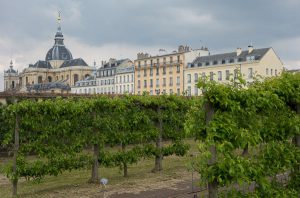 Even more impressive, one source says, “A great number of the Paris maraîchèrs, even of those who have their gardens within the walls of the city and whose main crop consists of vegetables in season, export the whole of their produce to England.”

Market gardening was introduced to England by C. M. McKay, a Fellow of the Royal Horticultural Society, who led an expedition to Paris to see the techniques in 1905. A number of how-to books were published for English audiences, including a popular one by McKay himself.

The techniques became quite popular, although they never quite achieved the level of sophistication seen in Paris.

In the 1920s and 1930s, English gardener and dramatist Alan Chadwick experimented extensively with the French intensive techniques, combining them with techniques from Austrian Rudolf Steiner’s biodynamic method to form the “French Intensive-Biodynamic” method of gardening.

After the First World War, la culture maraîchère began to wane in France and England. Land values soared, and empty lots were developed or became too valuable for gardens. More importantly, cars replaced horses on city streets, and the straw and manure that had been so important disappeared. 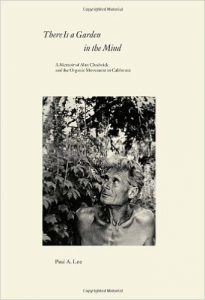 In the 1960s, Alan Chadwick brought his techniques to America on a 4-acre organic student garden at the University of California’s Santa Cruz campus. Starting with a hilly area of poor, clayey soil, Chadwick was able to eventually produce healthy topsoil and yields four times that of conventional agricultural methods.

Chadwick grew his crops on rounded raised mounds and used the “double dig” method – removing the top soil layer, exposing the subsoil or hardpan beneath, breaking it up, adding organic matter, and replacing the topsoil that was initially removed. This provided greater drainage and aeration. 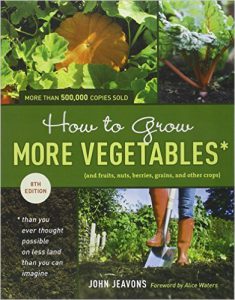 The techniques were studied by John Jeavons of Ecology Action, who wrote a popular book promoting these methods under the name GROW-BIOINTENSIVE. Jeavons’ book, HOW TO GROW MORE VEGETABLES THAN YOU EVER THOUGHT POSSIBLE ON LESS LAND THAN YOU CAN IMAGINE (usually abbreviated to just the first five words), was first published in 1974.  It helped to revive and extend the French Intensive Methods for a new generation in a new country.

Even at the height of market gardening, the people who were most impressed with the results did have some reservations.

Kropotkin, for example, pointed out, “And yet the Paris gardener is not our ideal of an agriculturist…. He toils, with but a short interruption, from three in the morning till late in the night. He knows no leisure; he has no time to live the life of a human being; the commonwealth does not exist for him; his world is his garden, more than his family.”

On the other hand, there is all that beautiful, beautiful food…..

Ron Finley, in this TED talk, tells about his efforts to grow food for himself and his neighbors in his community in South Central Los Angeles.  The poem continues….

Time it is to sow

The seeds for anything

You want to grow

In its wide warmth,

A sensual touch that

Grounds you deep and solid…

So solid that you may not

Want to move the way

The world says you must,

The way your heart says you must.

And what is it that

What is it that deepens you

And makes you stronger?

It is calling you,

Your comfort and your strength.

It is waiting to embrace you.

Do not be afraid.

Picture credits:  Scenes From An Urban Garden by Travis Ford via Flickr [CC BY 2.0]; all book covers via Amazon.com