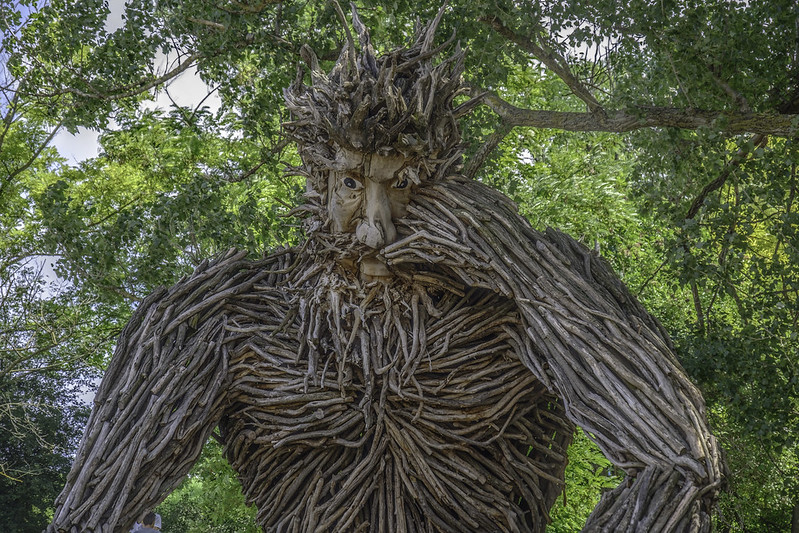 I’ve got some news for you:  Just because you are “eccentric” (weird, quirky, odd, freakish, peculiar, unorthodox, unconventional, different…whatever you want to call that thing you do), it does NOT necessarily mean you are a Creative.  It does not indicate that you are Innovative and/or a Genius.

Got some other news for you:  It’s all good anyhow.

Maybe your apartment looks like a shrine to succulents or a stage for all those performer plants from Orchid-land Central.

Maybe you’re into search-and-rescue or treasure-hunting or trash bin diving.

Maybe you’ve got a major zebra finch collection or a flock of roller pigeons on your roof.

Maybe you like wearing outré or retro clothes or playing at being a cartoon or movie character.

Maybe you’re the lead singer in a rock and roll band or you play the cello as a side-gig.

Maybe you want to stump around and grouse at people during the election season and climb up on soapboxes and declaim something or other as an orator or spoken-word poet or storyteller.

Maybe you build little robots or rocket ships in the garage or mix up potions or bake doggy-biscuits in the kitchen.

Maybe you’re training for a walking tour around the world or practicing forest-bathing.

Maybe you’re a plein air painter or a macro/micro photographer who chooses oddball locations to do your discipline.

Whatever.  It’s your life and, as long as you’re more-or-less street-legal and not hurting anybody else and you enjoy it, that’s cool.

If you want to add color and beauty, whimsy and joy, adventure and magic, or good-hearted service and help of some sort or other to the world we are making together…well, why not?

Boring is so meh!  Do something else.  Go play.  Do it your way.

The film itself is based on the findings of a Scotland-based psychotherapist David Weeks who claimed that eccentrics live longer and are happier and healthier than the conformists of the world.

A CAVEAT OR TWO

Just don’t delude yourself and buy into that hackneyed cliché that says eccentricity and weird is a pre-requisite for being Creative and a Maker.  Just because you decide to take your pet lobster for a walk down the street on a silk leash does not make you Oscar Wilde.

I’ve been stumbling through a stack of posts and musings by assorted people who were apparently influenced by various sociological and psychological studies and such conducted by behavioral and neurological researchers.  The guys and gals in white lab coats have found links between minor madness and creativity, they say.

From these findings, the opinion-mongers and life coach pros made the leap to the notion that behaving like an Outsider or Different or More You helps you unlock your creativity and lets your genius shine so that you can “make a difference” in the world.

A strange wardrobe, histrionics, and unusual pastimes probably will make you memorable.  You’ll stand out in a crowd, f’r sure, even with social distancing.

Probably, though, you won’t have a huge impact on the world as we know it all by yourself — unless, of course, you really are a slightly deranged creative genius who is either

Just on general principle, I do have a fondness for freak-flag flying.  It can add a whole other dimension to your life and it can be fun.

The phrase itself was first heard in a song written by guitar god Jimi Hendrix and recorded in 1967.  In his song, “If 6 was 9,” Hendrix declares, “I’m gonna wave my freak flag high.”

Crosby, Stills, Nash and Young took up the cry when they recorded their counterculture anthem, “Almost Cut My Hair,” in 1970 and the phrase, “I feel like letting my freak flag fly” caught on.

In 2008, Shrek The Musical, a play that included composer Jeanine Tesori’s song “Freak Flag,” opened on Broadway after a trial run in Seattle.

And then there’s this bit of loveliness from the Oregon alternative rock quartet Fortune’s Folly which is made up of vocalist Calysta Cheyenne, guitarist Ira Mazie, bassist Jesse Sanchez and drummer Alex Koleber.

HOW YOU, TOO, CAN PUT A DENT IN THE WORLD FOR REAL

All that said, there is a book, published in 2017 (and unpacked and expanded upon by a diverse array of YouTube videos), that has me bedazzled by visions of possibility:  Nilofa Merchant’s THE POWER OF ONLYNESS:  Make Your Wild Ideas Mighty Enough To Dent the World.

Merchant is a former tech executive connected to Apple and Autodesk.  During her 20-plus-year career as an executive and then in her own consultancy business she earned an “impeccable reputation” for her ability to guide both Fortune 500 companies and start-up organizations through difficult situations.

She has personally launched more than a hundred products, netting $18 billion in sales.

An apparently indefatigable speaker, she has been tapped as a TED mainstage speaker and even helped to put together speaking events at the 2019 Meaning Conference, an annual gathering of people held in Brighton, UK, who believe business can and must be a force for positive change.

Merchant’s talks and interviews on YouTube all center around the topics of innovation, social change, leadership, collaboration, and the dynamics of power.  A recipient of the “Future Thinker Award,” she has been ranked as one of the world’s top 50 management thinkers by the Thinkers 50 organization.

The lady is good.

One YouTube video features Merchant being interviewed about the book by Tracey Fitzpatrick.  It is one of a series of videos about that interview which was put up in 2018 by Russell Sarder at Sarder TV.  Like all of the other videos in the series, it makes little explosions in your head as the ideas strike home.

Merchant answers the question, “How can ordinary people make an impact?”  with a story about her husband.

NetCom CEO Russell Sarder and his team put together Sarder TV in 2012.  It provides exclusive interviews with authors, leaders and taste-makers that focus on subject to inspire business executives and leadership teams.

In this next video, “INBOUND 20 Bold Talks Spotlight,” Merchant explains the basic elements of her mind-construct and how it all comes together.

One of the major constellation of thoughts in this talk about “connecting by meaning” intentionally in this Social Age of ours, was Merchant’s aphorisms about the progression of how the whole thing works.  She tells us,

AS YOU VALUE ONLYNESS YOU ENABLE VALUE CREATION.

Inbound.com is an interactive online HubSpot community of entrepreneurs and geeky sorts who explore better ways and means for doing business in the 21st century through various social media platforms.  The staff maintain a year-round blog and put together a digital conference very year with fascinating thinkers and interesting topics.

2020 was supposed to be the year when they went from disseminating digital content to going analog/physical where attendees would actually be meeting face-to-face.  Then the Corvid-19 pandemic happened.

For more of Nilofer Merchant’s thoughts, you might like to click the button below and watch her talk, “Onlyness in Action” which happened during the 2019 Meaning Conference.

This book is a keeper, guys….

My heart exposed and bleeding.

All my nerve endings are jumping, you know.

And I think I lost my stomach somewhere.

My eyes are welling up

With tears that help me see

All its refracted brilliance.

I am standing here shattered

By a strange sorrow and a love

I can hardly keep contained

Inside this one small frame of a self.

This dream we call “World” is so beautiful, you know,

So wild and churning with possibility,

Rolled into one huge, glorious package,

I am standing here just waiting,

Knowing that all I am –

My weaknesses, my strengths —

Is real and true and good.

And even though I’m shaking worse than a sick puppy,

At least it is sufficient for

When I was young and stupid I made a resolution

To live my life in good faith

And this is what that path

Has brought me to.

I am standing here, severely overwhelmed,

Hanging in there, watching

As the sun breaks through the morning clouds.

This is supposed to be brave?

Then why does it feel so good?

Header photo credit:  “What are you doing?” by Light Charmer via Flickr [CC BY-NC-ND 2.0]