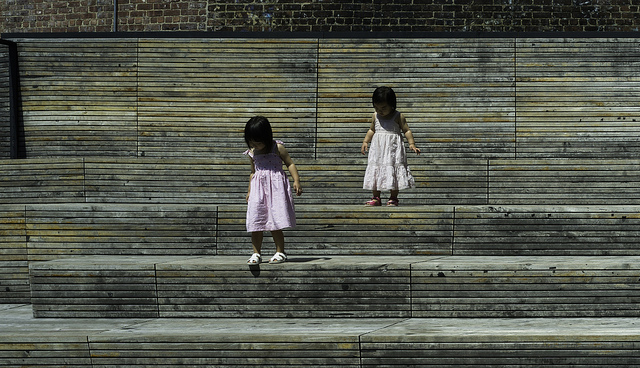 Here are some thoughts from E. Thomas Behr, Ph.D. in THE TAO OF SALES: The Easy Way To Sell In Tough Times.  First published in 1997, it attracted a lot of interest until it went out of print.  It’s since been re-issued.  (A great book.)

The major thought Behr had was this:  if you lead by following your principles and your own authenticity, then it makes room for good things to happen….

1.     DON’T JUST DO SOMETHING, STAND THERE.  If you take a stand on values and principles, perhaps others will develop the courage to do the same. Sometimes it leads to you being street pizza, when you try to face down assorted steamrollers, but I notice it does tend to be true that you can get a lot of the pettiness out of your life by doing this one.

This leaves a lot more room for creativity and for beauty, so what’s a little flatness here and there?

2.     SIMPLIFY ALL ACTIONS AND BEHAVIORS TO A FEW CONCRETE PRINCIPLES.  Let the values guide the results.

This one works really well.  Mostly, if you always follow a few basic principles that mean a lot to you, then people know where you are standing and they tend to allow you that space.

Maybe they are just being kind about not wanting to disillusion you and all or maybe they just don’t have the time to start shoving your head into other spaces, but who cares?  It works.

3.     TAKE RESPONSIBILITY FOR MEASURING YOUR OWN INTEGRITY YOURSELF.  You are not the only one who knows whether you’re walking your talk.  It shows.  It’s a good idea to pay attention.

4.     CONFRONT YOUR OWN CONCERNS AND FEARS ABOUT AUTHORITY IN AN OPEN, CARING WAY.  I do have major “issues” with authority.  However, I have figured out that scorched-earth war tactics really don’t leave much for anybody to work with.

It’s a lot easier on everybody if I can be gentle.  This is a lot harder for me than coming out swinging so I have to be really gentle with my own self as well.

5.     MEASURE WHAT MATTERS.  That’s a problem I have with bean-counters:  They are so busy counting beans when other things matter so much more to me and I often cannot get my head around their concerns.  I do try because it is important, I suppose.

I just prefer measuring things like room to move and heart-space and stuff like that.  (I probably drive the bean-counters crazy.)

6.      IF IT AIN’T BROKE, BREAK IT.  The best thing about this one is that it helps me forgive my own klutziness.  Calling the stumbling around I do “re-inventing the world” is a lot cooler than saying, “Oops!”.

7.     REPLACE “CONTROL” WITH “ORDER.”  The neat thing about this one is that there are all kinds of order.  Some of them are quite lovely and meaningful to the people who are in them.

It’s a very cool thing to be able to see other people’s “order” as wonderments rather than as them being wrong because you are so right, right, right….

In this YouTube video, Art – Life Made Me Do It, Simon Birch, an artist who has gained some renown in Hong Kong, tells about his life and how his art grew out of it.

That is the thing, isn’t it?  Following your life, letting your days lead you to your best place, is often the best way to get to authenticity and gives your life its own meaning and mana.

So, hey…what are you doing to get back to you?

GETTING BACK TO GRACE

Getting back to grace is Job One.

(It says so right here.)

What happens when you’ve run out of cheek to turn,

And your back is to the wall,

And you’re looking at yet another transgression,

Another incursion, another this or that?

Getting back to grace is gonna be tough

When you’re bucking the gale-force winds

Of somebody else’s stubborn,

Of somebody else’s stupid

And somebody else’s something-or-other.

It gets even rougher when you’re leaning into

The tropical storms of your own blindness.

Let’s do it step-by-step.

If Grace is a place where I can stand,

Then, probably, it doesn’t need ME to make it real, right?

I mean…I didn’t invent it.

And if that’s so,

Then all I have to do is find it again.

Maybe I just have to take off this stupid bandana

That’s worked itself down over my eyes….

Wouldja look at that:

I’ve been standing in Grace all this time!

24 thoughts on “LEADING BY FOLLOWING”