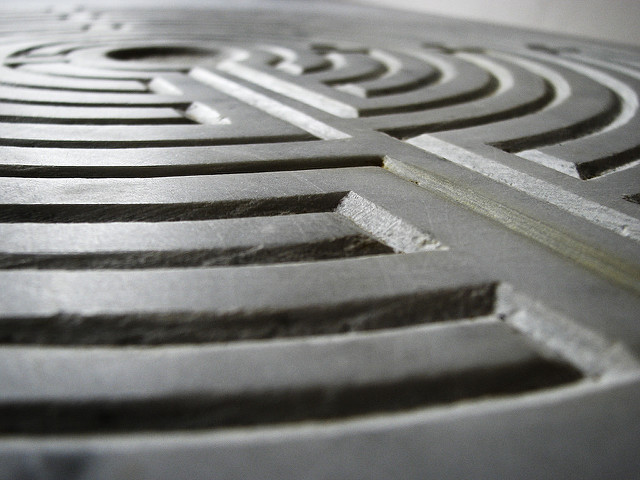 People seem to confuse “labyrinth” and “maze.”  They are both constructed paths you have to walk and they both have beginnings and ends, but their purposes are very different.  I am coming to the conclusion that I am living my life in a labyrinth…or at least I want to be.

So what’s the differences between them?  Let me list the ways….

It’s a funny thing.  When you lay it out like that, you can actually suss out that doing the MAZE thing as a way of life is probably toxic.  I mean, they use mazes to test and play head-games with rats.

Through the ages, for more than 4,000 years, people have been fascinated with labyrinths.

This rock carving at Meis, Pontevedra, Galicia in Spain could date from as early as the Atlantic Bronze Age.  (Rock carvings are notorious difficult to date.)

Here is the reverse of a clay tablet from Pylos with the motif of the Labyrinth. The terracotta tablet is the earliest datable representation of the 7-course classical labyrinth.  It was recovered from the remains of the Mycenaean palace of Pylos, destroyed by fire ca 1200 BCE. “There is no evidence for a connection between the labyrinth design and the legend of Theseus at this early date,” it says here.  The tablet is currently in the National Archaeological Museum in Athens. The story that’s associated most closely with the labyrinth is the legend of Theseus and the Minotaur.  In Greek mythology, the labyrinth was an elaborate structure at the palace of King Minos of Crete at Knossos.  It was designed and built by Daedalus, the king’s legendary architect and artificer.

It is said that Daedulus had a hard time figuring out how to get out of the labyrinth once he had built it, which tends to make me think that the thing was actually an elaborate maze.  Whatever.

In the story, the labyrinth was built to contain a monster-man that was reputed to be the son of the king’s nymphomaniac wife by the Sacred Bull.  (No, I am not going there….)

Minos, a classic  tyrant, used to exact tribute from the neighbors, hauling off their  young men and women who were pushed into the labyrinth, probably as food for the Minotaur.  The Minotaur was killed by the hero Theseus.

This Roman mosaic shows Theseus at his moment of triumph.   The picture’s apparently the work of an anonymous U.S. government employee.  The mosaic is in Rhaetia, Switzerland.

Labyrinth designs have been found in many different cultures.  This intricate carving depicts a scene from a legend from the Mahabharata, where the warrior Abhimanyu enters the chakra-vuyha-Hoysaleswara temple in Halebidu, India. The following map of Jericho was photographed from a page in the 14th century Fahri Bible written by Elisha ben Avraham Cresca.  Another labyrinth…. Here’s a small “turf maze” that looks very much like a labyrinth.  It was photographed by Simon Garbutt in the 1970’s and later uploaded into Wikimedia Commons.  He says about it, “City of Troy. The only surviving example in the North Riding of this type of grass maze. It is located by a roadside in the Howardian Hills of Yorkshire, England, near the villages of Dalby and Skewsby, close to Sheriff Hutton, a few miles north of York.” And here’s a surprise:  a labyrinth stone in America….  In the Reinhardt Canyon on the easterly side of the Lakeview Mountains in Southern Calfornia, there’s a prehistoric petroglyph near Hemet, Riverside County, California.  It’s a California Historical Landmark and is called the Hemet Maze Stone.

Many cathedrals have labyrinths incorporated in their design.  One of the most famous is the labyrinth at Chartres Cathedral in France.

In modern times there has been a revival of the interest in labyrinths.  Much of this began with the work of Reverend Dr. Lauren Artress, an Episcopal priest at Grace Chapel in San Francisco.  She’s written three books on the subject.  Her first, WALKING A SACRED PATH:  Rediscovering the Labyrinth as a Spiritual Practice, sparked the beginnings of a world-wide cultural phenomenon that is called “The Labyrinth Movement.”

Now there are non-profit groups and websites that focus on the labyrinth as a tool for getting back to your own center.

Public spaces have been built that incorporate the labyrinth in their design and a slew of books have been written telling folks how they can use the ancient design to walk around in their own minds.

I do not know whether Artress or any of the other good people in the Labyrinth Movement have actually uncovered any ancient esoteric secrets.  (Mages are notorious for being secretive folks who just do not share their hard-won mystical lore with the uninitiated.)

However, using the curving pathways of a labyrinth to help you visualize an inward journey that leads to the center of your being and then out into the world again is a powerful metaphor that apparently works for many people.

My take on all this is that people are hungry to find peace of mind.  The Labyrinth Movement and all things labyrinth is a direct outgrowth of that hunger.

THERE HAS TO BE A WAY

There has to be a way to understand the Tao

A way that doesn’t mean apart

Staring at a blank and rocky wall,

Breaking through into the Real

By deciphering quadruple entendres and

Into a hammer which breaks down the Self

Until there’s nothing there.

There has to be a way to reach the Oneness

That lets you swim in it and revel in its joys;

That lets you hold all its sorrows

And build a wondrous web that

Encloses, cradles and connects you in

The Beauty and the sadnesses of Real;

A way that lets you stretch between

The Heaven and Earth within you and

Lets you grow – yet another bamboo stalk –

A way that lets you dance within its circle

And reverence the truths, the love you feel.

I guess that this is what I search for:

A way to walk and dance into the Real

That keeps world-wonders fully in my heart

And celebrates the goodness that I feel

Inside the ordinary simple and the small.

For me, these things are as important

As the magic in the silence of the stars.

I don’t want to lose the butterflies and tadpoles

The pregnant silences of sheer cliffs,

The songs of birds and gentle rustling grasses,

The many songs that water sings…all call to me.

I love this world with its many faces,

Its many moods and modes and ways of being.

I cannot turn away, no matter what the wise ones say.

For me, the world holds everything that’s dear.

I am sure they are right in what they tell me;

I do not doubt they reached magic and the Real.

They flew up high above all the tangles.

The confusions that plague me, I know they did not feel.

And yet….I have to think that, maybe,

Those wise ones had inner spaces that were

Way more interesting than the ones in me.

(It’s pretty boring in there….)

20 thoughts on “LABYRINTHS ARE NOT MAZES”