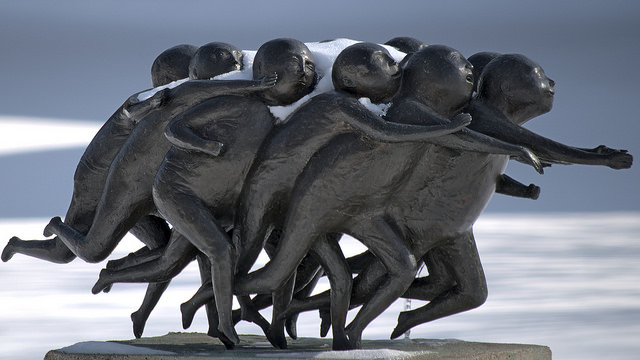 There used to be a thing called “spare time” which was greatly anticipated and enjoyed by those who had it.  It was the time we had available to do other things than work, developing our hustle-muscle, or striving for S.M.A.R.T. goals.

Spare time nourished us and kept us engaged and enjoying life.

Spare time helped us to thrive in the middle of Life’s inevitable obstacles and challenges.  We were able to find meaning and mana in our ordinary lives because of our spare time.

Where did all the spare time go?

THE RISE OF HURRY SICKNESS

For many people it’s become a point of pride and a badge of honor now to be “Crazy Busy.”

The adrenaline rush of speeding through many tasks and communications can be addictive.  It feeds our illusion that we are always in high demand, that we’re conquering new territory and moving toward something grand.

The breath-taking pace of technological breakthroughs that help us feed our addiction for effortless speed and “saving time” and keeping up with the all of everything while  checking off to-do lists, hammering goals and piling up accomplishments is revved up and running, raining down every progressive technological wonder upon us and we are entranced.

Along with all the joys and blessings of our rapidly expanding technology, assorted researchers tell us, we are apparently experiencing an epidemic of “Hurry Sickness.”

Hurry Sickness is not some newly discovered phenomenon.  The term was first coined by cardiologist Dr. Meyer Friedman.

Dr. Friedman and his colleague Dr. Ray Rosenman shared a cardiology practice in San Francisco in the 1950’s.  They began studying and writing about the link between behavior and heart disease.

Their then-controversial work introduced the concept of the mind-body connection that is still being investigated and explored by researchers today.

The doctors’ observations were published in a popular 1974 book, TYPE A BEHAVIOR AND YOUR HEART.  It was the start of a whole new field of study for behavior researchers as well as a way to explain a lot about the consequences of human behavior on physical, emotional and mental well-being  to the general public.

It started to turn the focus of their studies towards ways that people could help themselves look for and find ways to greater personal happiness.

“Type A personality” soon became a popular buzzword to describe the driven, tenacious and relentless strivers who were likely to snarl at slow-moving salesclerks and other minions, who were compulsive multi-taskers extraordinaire and often prone to road rage.

More easy-going folks were categorized as “The Type B personality.”

Friedman’s life work was trying to get people with a Type A personality to behave more like people with Type B personality.  He came up with a therapy regimen that was meant to modify Type A behavior.

As the good doctor was fond of reiterating, “You can’t change personalities.  We just try for more B-like behavior.”

HURRY SICKNESS AND YOU

A YouTube Video published by the London School of Business, “Do You Suffer From Hurry Sickness?“ points out some of the less-extreme symptoms of Hurry Sickness observed by Richard Jolly, a London Business School professor and business coach.

According to Jolly, about 95 percent of the managers he has studied suffer from the illness, which has been defined as the constant need to do more, faster (even when there’s no objective reason to be in such a rush).

Working at breakneck speed for extended periods of time does not enhance productivity; it reduces it,” declares Dr. Edward Hallowell, author of CRAZY BUSY: Overstretched, Overbooked, and About to Snap! Strategies For Coping In a World Gone A.D.D.

Some of Hallowell’s thoughts from the book are presented in this YouTube video, uploaded in 2006 by simplyab.

As Hallowell says in his book, “When we work too fast for too long we get tired, become inefficient, make mistakes, and become unable to think clearly and sharply.”

Our bodies and minds aren’t meant to endure continual stress.  We get irritable, easily angered and upset from frustration and exhaustion.

Hurry sickness increases the body’s output of the stress hormone cortisol, which suppresses the immune system and has been linked with heart disease.  Blood pressure spikes and eventually remains at an elevated level.  Hearts wear out.

When our bodies and our minds stay in a constant state of overstimulation, it’s like being surrounded by lions and tigers and bears that work in shifts.  Survival becomes the order of the day.

When you’re too busy, you don’t do anything well.  Relationships suffer.  Performance at work and productivity suffers.

As Jolly points out, when you are caught up in all of the minutiae of being connected every minute of the day and night, you cannot take the time to slow down a bit and ask the big, really important questions.  You get too frazzled to entertain any creative thoughts.

Worst of all, you don’t enjoy life.  How?  You’re too busy flying from one thing to the next and you just haven’t got the time.  If unchecked, studies have shown, all this jittering can lead to burn-out and depression.

Hurry sickness is not limited to executives and entrepreneurs.

A classic baby boomer children’s book, HURRY HURRY by Edith Thacher Hurd with old-timey illustrations by her husband Clement was a favorite of my children.

In it, a nanny Miss Muggs who is always in a great hurry comes to stay with Suzie while her parents are away.  Little Suzie gets pulled along faster and faster as the nanny’s great hurry leads from one disastrous situation to steadily worse ones.

[The Hurds were one of the children’s literature’s best-known teams in their time.  The book was part of the “I Can Read” book series published by Harper Books.  It came out in 1960 and it’s still a grand read.]

For real, it is surprisingly simple to overcome Hurry Sickness.  The thing is, it ain’t easy.

The main thing to understand is the wise guys were right.  There are just three things that can help you reach your freedom from busy:

In later posts, I’ll be exploring these three.  I’ll present exercises and such that you can try to help mitigate the effects of Hurry Sickness.  There are all kinds of neat mind-games you can try.  Some of them may work for you.

Word is the World’s not fair,

You watch them crumple, bite the dust.

All that’s left is some soggy crust.

Entropy rules and it don’t care

Time moves on, all in a flurry,

Pushing you to hurry, hurry.

Drowning in all the doom and gloom.

[The game goes on, Dawn.

Do you REALLY want to play, Clay?]