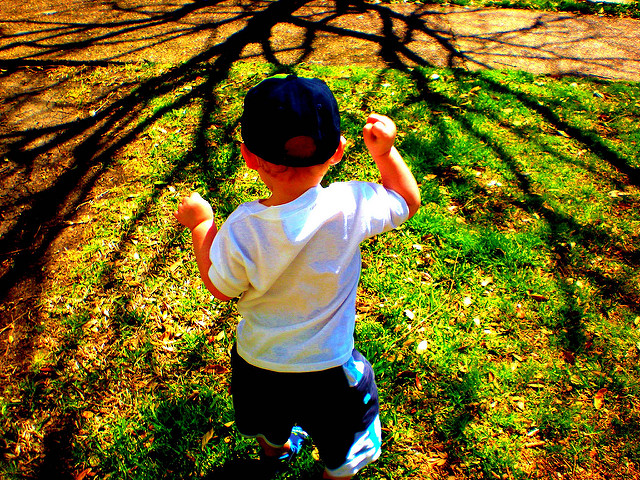 The coolest thing about kids, I think, is this:  They come into this world as a bundle of wonder and curiosity.

Kids know they don’t know, they’re hard-wired to find out, and they are absolutely single-minded in their efforts.  They are the epitome of relentless, the very best role models for persistence.

Every one of them is working on mastery.  They all want to know how to do it all well.

It doesn’t stop:  walking, talking, tying shoelaces, making friends, riding a bike, playing games, finding out how something works and why you do this and not that.  On and on and on.

They notice everything (especially the stuff the adults would rather they didn’t) and they are interested in every single little thing they encounter.

Their major mistakes are usually the result of ignorance.  They just don’t know enough yet and a lot of their plans fall apart because of that.  (That tends to give the people who care about them the heebie-jeebies, but so what?)

When they’re starting out, kids are determined to catch on and catch up.

Kids start small.  After all, they are little and they are weak and have to depend on the Bigs around them just for survival.  (But, THAT is gonna change!  Uh-huh.)

Every time they make a misstep, it’s usually just a small hiccup in their forward progress.

The little guys haven’t gotten to the big stuff yet and if they’ve got Bigs who help to keep them mostly safe from the ordinary life-threatening stuff, kids can pick themselves up and try again…and again and again…until they get to where they want to go.

If the circumstances in their lives are harder, more unfortunate, or even downright dangerous, then the ones who survive learn more and they learn faster and often they get even better at not giving up.

Every little win is its own reward.  (One more down, what’s next?)

TIME IS ON THEIR SIDE

Kids know time is on their side.

They already know how to act cute, and they are going to learn how to make friends and influence all those Bigs too.  They’re going to keep on going until they get there.

Kids also know that play is really serious work.  It’s how you learn what you need to know.

When they get the chance to play, they will go for it.  Why not?  Maybe they will learn something.

GETTING BACK TO THE MOJO

We all started out like that.  Some of us manage to hang onto the wonder and use it to leverage ourselves up and on to doing more and more amazing things.  The rest of us wonder how come we don’t.

There are a lot of lessons you can learn about mastery by watching kids.  Here are some examples:

Isn’t it funny that these lessons are the same ones that we hear from all the wise guys and life counselors and self-help books?

My theory is that somehow, on our way to learning how to be adults, we got distracted by the details and have forgotten the power with which we were born.

I get the feeling that power’s still there, waiting for you to notice, and if you’ve forgotten what it looks like, then the Universe has lots and lots of little guys who can help you remember.

My own feeling is, if you’re stuck in the suck of trying to be a cog in some wheel not of your own making, the best thing you can do is watch kids…your own kids, kids belonging to your friends and family, stranger kids doing their thing, whatever.

Watch what they do.   See what works.  Do that.

This YouTube video is a compilation of jaw-dropping performances by some amazing kids.  It was put together by People Are Awesome in 2017.

The world is a bigger cup

Than your small hands can manage.

It is heavy and close to overflowing.

The hot liquid heart-blood it holds

As you concentrate on not-dropping,

As you try yet again to

And you grit your teeth.

To hold onto that cup

That seems to get heavier

As you walk along.

The cup’s lying there, emptied,

And all the stuff’s spread out

In one grand sploosh spattered all over

That proud new pair of shoes

As old issues come bubbling up to blindside you,

As the shouting starts you notice that

The issues are not even yours.

My small, but not my bad.

It helps to remember that

The world is heavy

It helps to remember that

We are all small.

Header photo credit:  “Power” by BadWolfBobbi via Flickr [CC BY 2.0]

Thanks for your visit.  I’d appreciate it if you’d drop a note or comment below and tell me your thoughts.

25 thoughts on “GET BACK YOUR KID MOJO”