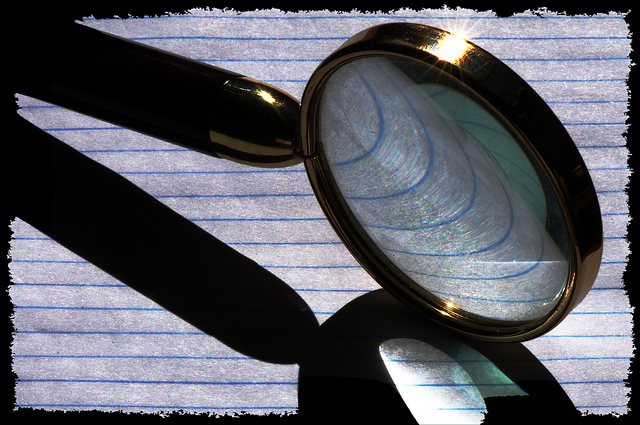 After constructing Life-Built Poems for a number of years, I noticed something:  You can use the discipline of writing these kinds of poems to look at the world and tell yourself what you see.  Like Joan Didion, you can “write to find out what you think.”

You can also use Life-Built poems to tell metaphoric tales about what you are doing.  At the time I wrote this poem, I was devouring the books that populated the self-help and spiritual sections of every library and bookstore I could find.  I even did the dumb exercises and stuff in those books.

A lot of what I was encountering was more than a little foreign to me.  Making my poems helped me to figure out what I thought and felt about those strange and wondrous worlds I was exploring.  (I figured that had to be better than ingesting odd substances that make your head all wonky.)

It was an exercise in one of those books that tell you how to take
your head into your own hands and wash and scrub it, inside and out,
letting the old stuff dribble out of your ears and down your neck.
I threw my heart and belly in there and scrubbed them up as well.
I figured since I had the scrub brush out, why not?
Maybe I overdid it.

I watch the flames lick at the lies I’ve told myself,
the ones I was conned into eating up whole when I was too young to know better,
the ones I grew myself as I got older,
the ones that kept replicating themselves and crowding in my head,
all of them running full-tilt around and around,
like mad hamsters stuck inside a squeaky mobius treadwheel.

I’d written them all down on bits of paper and stuck them in an old metal bucket.
I threw incense and fragrant oils on them,
honoring the power the lies once held over my head, my heart, my gut.
Then I touched them with fire
And I watched the bits of paper burn away,
making a line of smoke, rising high in the early morning sky.
There they go…all gone now.

I am free.
It says so, right there in that book.
The lies have flown away.
They were wrapped around in that smoke that lifted them up and away,
releasing them from the bondage they had been serving in my head,
so they can return to wherever they began.
(I hope they like their freedom.
They’ve been good servants, after all, and I do wish them well.)

It’s a strange thing, though.
Probably it’s ’cause I’m obtuse and just a little bit dense.
Maybe I’m just not doing it right.
All I know is, I am feeling hollow.
There’s an echoing empty inside me now
where once lies thronged like a multi-colored crowd caught up in
busy hurry-scurry — on a mission — every one.

This has started me wondering:
So, what do I do now?
Where do I go next?
Now that I’ve lost the lies that used to guide me and advise me,
the gates of the old castle they defended stands wide-open and
I can see the Forest Perilous stretching before, wide and wild.

I’ve gotta tell ya,
This is REALLY scary!

The whole point of this, I think, is that you can explore ideas and concepts as easily as feelings with your poems.  It’s even more meaningful if you can do them both together.  Go on…try it!  Maybe you’ll like it.

14 thoughts on “FINDING OUT WHAT YOU THINK”