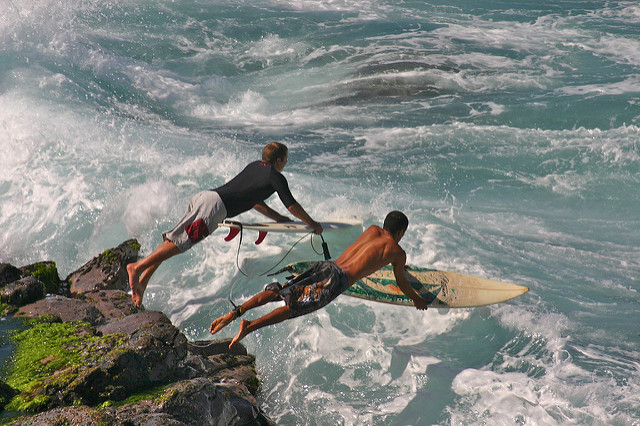 Tobin Hart, in his book THE FOUR VIRTUES, defines “creation” as “harnessing the capacity to take action.”  Everything can “do” stuff….it’s why we’re here on the planet, apparently.  (Even rocks and dirt can “do” stuff.)

What turns doing into creating is what Making is all about:  a purposeful directing of energies that brings something new into existence.

Piling a bunch of rocks into a heap is doing.  Taking that same pile of rocks and turning it into a wall for a house, a taro paddy, or a fort…that’s creating.  Creation has an effect on the world.  And it requires some kind of mind to harness the doing energy purposefully.

The mind doesn’t necessarily have to be human.  After all, birds and wasps can build nests.  The main thing that differentiates human Making from animal Making seems to be the sheer volume of different things humans set out to make.

Humans are more likely to just play with the materials at hand in new and different ways to produce an extraordinary variety of often-useless objects that become a new part of the world.

Humans also tend to imbue their creations with extraneous meanings, making up stories that we call “voice” and “vision” to the things.  I suppose that’s also a part of Making.  Hmmm….

Here’s a TEDxBedford talk by David Litchfield who is a teacher at Bedford College as well as a professional illustrator who does work for The Beano and the Telegraph among other publications.

His talk, How Doing a Drawing a Day Changed My Life, is a perfect illustration of what comes of Making…the building of a whole new mindset and a whole other world to inhabit.  To my mind, that is Making at its finest.

Here’s a poem for all the ones who back away saying, “Oh, I’M not creative.”:

I always have to giggle

When people tell me,

I wonder whether they’re thinking

They are dumb-ass zombies,

Shuffling dull-eyed through the world

Losing bits of themselves, all unaware,

On some old statue’s head

I want to shake them, you know.

I want to slap their heads.

I want to tell them,

You were born a Maker….

The evidence is all around you!”

Here we are…all us Makers

And don’t we spend our days Making?

And now you’re trying to tell me

The flow of the Creative

22 thoughts on “DOING VS MAKING”