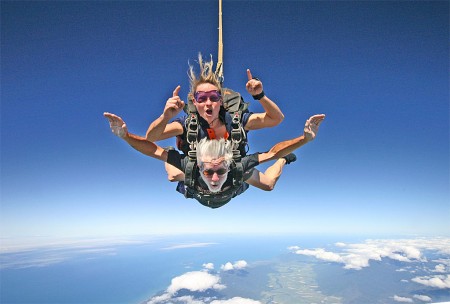 Ah…here it comes again.  Another Un-Seeing Exercise.  There’s THAT question:  Who am I to be so bold?

The story you tell yourself about what you “cannot” do can hurt you your entire life.  This question, in particular, can tie you up in all kinds of knots and keep you stuck in suck.

WHY BOLD?  WHAT IS BOLD?

“Lemme tell ya, cookie,” as an old, rasty rascal of a friend used to say, “it’s supposed to be bold.  What are ya?  Some kinda snail?”

Jan (Arny) Messersmith published that sky-diving image in the header of this post in his Flickr stream in 2010.  He tells the backstory in a long rumination in his image notes.  He also includes one of the best definitions of “bold” I’ve ever seen.

He says, “Boldness is the exercise of one’s beliefs accompanied by a certainty that positive and well-considered actions will produce desirable outcomes.”  He continues, “Timidity and fear are not compatible with confidence and trust.”  It’s a truth, that.

This INBOUND Bold Talk, “From Suit to Seal” was published on YouTube by HubSpot in 2015.  It features Phil Black who hung up his suit as a Goldman-Sach minion to become, of all things, a Navy Seal.

“Be bold,” Black says at the end of his talk.  Bold is the first step to following your dream.

How do you get to bold?  Some counterpoint questions might help.  How about these?

The saddest comment I have ever overheard was one from an elderly grandmother telling her grandson, “Go do your dream, bebe.  Me, I too old for dream now.  I can only wish.”

Another take on this is the advice in this spoken poem, “Everybody Dies But Not Everybody Lives” in this YouTube video by Richard Williams, better-known as American rapper and spoken word artist Prince Ea.

Prince Ea published the video in 2016.  It was a collaboration between the artist, who calls himself a “Futurist,” and Neste, a Finnish oil refinery company that, besides producing and marketing petroleum products, also produces “renewable diesel” which is produced in a patented vegetable oil refining process. The upcycled vegetable oil works well as an alternative fuel in diesel engines.

PRETEND THERE IS NO COUNTDOWN

The Real is that being bold isn’t all that hard to do.  Major tip:  Forget the countdown.  Never mind “a-one and a-two and a-three.”  Just go.

Practice will help with that.  It gets easier every time you do something that makes you scared and nervous.

FOLLOWING IN THE FOOTSTEPS

Bold can also get easier if you can follow along the trails of adventurers and explorers who’ve gone on ahead of you.

I AM NOT HERE TO AUDITION

I’m not here to fill

A role one playwright

Or another put down

To get some constipated plot

Moving this way or that.

I’m not here to match

Or for an echo of some

I’m not here to act out

Of the statement I must make

I’m not here to bend

To make some producer’s

I’m not here to audition.

The part is already mine.

And, on this stage,

I’m the star and the chorus line.

Whether I show what’s honest,

Whether I show what’s real,

Whether I am brave enough

To show what I truly feel:

Only I can decide.

I’m not here to audition,

And neither, my dear, are you.

On a different page,

30 thoughts on “BE TOO BOLD: An Un-Seeing Exercise”